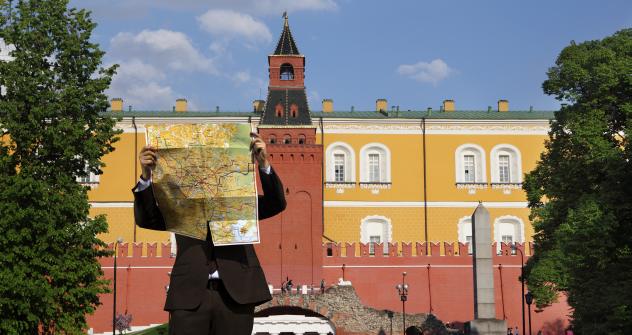 Lost in Moscow? Don’t be afraid to ask for directions. Muscovites may appear brusque, but they are happy to help if they can. Source: Legion Media

Moscow is a leading world metropolis, but has difficulty attracting visitors. Are the stereotypes true? Or is the city’s bad reputation completely unfounded?

As a tourist destination, Moscow has long been a victim of stereotypes, most dating from a time when few foriegners got a peek behind the Iron Curtain. Although today the Russian capital features more than its fair share of steel-and-glass skyscrapers and Western European chain retailers, many would-be tourists believe things about Moscow ranging from “the city is run by mafia” to “the air is unsafe to breathe.”

"Housing is expensive. Transport and culture are rather cheap in comparison to western Europe."

But Moscow expats and visitors take a different view. Their opinions vary, but there is a strong sense among them that the city is an epic place.

The most expensive city?

For many years, Moscow was at the top of the list of the world’s most expensive cities. And while many foreigners agree that Moscow is by no means cheap, the rankings are somewhate misleading — especially if you know how to work the system.

"I think Moscow can be expensive, but there are also a lot of ways to save money as well, especially on food,” said Brandon Para, 22, from Pennsylvania. “Eating street food and eating in places that serve cafeteria-style food, like Mu-Mu, helps to save on food costs. The No. 1 piece of advice I would give visitors from America is to eat at places like this, because you can still get a lot of food for the price.”

"Moscow is no more dangerous than London. Advice is not to flash your cash and not to speak loudly in a foriegn language.”

Another good tip is to eat your main meal at lunchtime, when many restaurants feature a three-course business lunch for around $10.

It’s a good idea to save money on food, because hotels are by far the most expensive part of a trip to Moscow. A recent survey by the Hotel.info Web site revealed that the average cost of a hotel room in the Russian capital this fall is $191 per night. This fact makes Moscow the second-most expensive capital in the world for hotel rooms after Oslo.

Part of the reason for the high prices is the shortage of hotels in Moscow. There are 215, according to official statistics. Things are looking up though: in 2011, three new hotels were opened in Moscow, four more will open before the year is out and 14 hotels in the center are due to open in 2012. According to City Hall, by 2020 the capital will have 535 hotels capable of accommodating 150,000 tourists.

Try to save by choosing the right season for your visit: January is considered to be the off season, which includes the three Christmas weeks (in Russia, Christmas is in January and there is a holiday for almost half of the month.) Few conferences are held during that period and only 10 to 15 percent of hotel capacity is used, according to Moscow’s Tourism Committee.

Another way to save is to find a hostel. They are springing up like mushrooms and are already making inroads in the market. There are officially 55 hostels in Moscow, almost all of them in the center. Twenty were opened in 2011. The average price per night is 10-20 euros.

If you manage to find a cheap hotel, you can spend your money on souvenirs, but again, it helps to know where to look.

“Souvenir shops are to be avoided at all costs, especially in central Moscow, as their prices could bankrupt small countries,” said Laura Gardner, 26, from Manchester, England. “Markets are the best place to look for that cheap, authentic piece of Russian culture that you just can’t live without.”

Dangers at every step?

Is Moscow dangerous? One question potential travelers often have about Russia involves the crime rate. Stories of the “Wild East” of the 1990s were prominent in the Western press, and those stereotypes still loom large in the minds of many potential tourists.

“I am sure it is like any big city. However, I do not feel unsafe at all. I was very cautious in the beginning. I had been warned about pickpockets, etc. So far, I have not been the victim of a crime. I do not know anyone personally who has been a victim,” said 31-year-old Tessy McKee, an English teacher from Louisiana who lives in Moscow.

"The stereotype is that Moscow is big, crowded, a city of business, and that people are always in a hurry. These are all true! However, it is possible to find quiet back streets to wander through.”

The advice offered by travel agencies and seasoned travelers to first-time visitors to Moscow is pretty much the same as for any other city: Do not stray on to unknown streets after dark and keep away from groups of strangers. After all, Moscow is the biggest city in Europe, and like any other major metropolis it has petty crime. Common sense is generally the best weapon against a bad experience.

According to The Village Web site, 15 percent of expats in Russia are afraid of confronting racists or nationalists, and this is not unwarranted.

“While living in Moscow, and since leaving, I have routinely heard disparaging and insulting comments made about people from Africa, the Caucasus and China, in particular. Most Russians I met were very loyal, friendly and generous. However, there are a few bad apples mixed in as well, and you probably will come across them at some point during your stay,” said Californian Cole Margen.

Don’t be afraid to ask

What’s the best way to explore the city? Take the Metro. Learning to get around like a Muscovite gives visitors a taste of local life while saving money.

“As for finding your way around, the Metro is really pretty clear and simple,” said Elliott Estebo, 25, from Minneapolis, Minnesota. “The masses of people can be a bit intimidating if you get lost, but if you’re underground you can find your way. Above ground, the streets can be confusing, and they’re not always clearly marked.”

The Metro is also cheap. A single trip costs 28 rubles (about 90 cents), whereas taxis will set you back much more.

If you’re lost, you can always ask directions from a passerby: a general rule of thumb is that the younger the person, the better the chance he or she speaks English.

Are Muscovites unfriendly? People are not falsely friendly (unless they have just finished some customer service training with a Western company), but if someone says something nice, it is genuine.

There is now a 24-hour call center for tourists in Moscow. Operators speak both Russian and English and are ready to answer questions about the capital’s places of interest and methods of transport. They can also help in case of an emergency by calling the police or a tourist’s embassy. The call center can be reached by dialing 8-800-220-00-01 or 8-800-220-00-02.

"Before I visited Moscow, I thought it would be horrible and the people would be unfriendly. I was scared to come here because I thought I would get lost all the time and no one would help me and I would be scared of the size of the place. But I realized that, generally, if you need help, people will help you,” said English teacher Sarah Kay, 22 from Sheffield, U.K. “I really enjoy living here. There’s plenty of things to do and plenty of interesting people to meet. I recommend this city to anyone who wants to experience Russia and/or learn Russian.”

And if you try just a few words in Russian, you will hear the din of excessive praise and wild applause. No one will tell you your Russian is terrible; instead, you will be encouraged to speak more. Give Moscow a chance. You might fall in love with the city, too.