Borsh and blinis in Bangalore 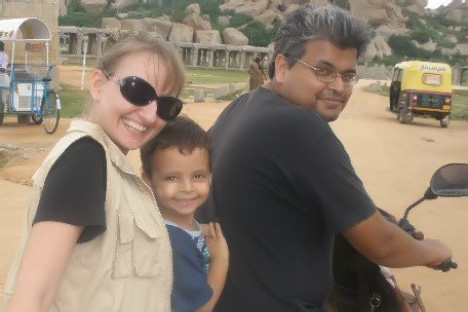 Elena Bannerjee with her son Marcus and husband Ashish

Picture a group of young people enjoying some borsh, followed by blini (pancakes) and pilmeni (steamed dumplings) in a quaint and cosy cafe on a cool afternoon. This would be a rather normal site anywhere in Russia, but the cafe in question is 5856 kilometres to the southeast of Moscow, in the southern Indian city of Bangalore.

Picture a group of young people enjoying some borsh, followed by blini (pancakes) and pilmeni (steamed dumplings) in a quaint and cosy cafe on a cool afternoon. This would be a rather normal site anywhere in Russia, but the cafe in question is 5856 kilometres to the southeast of Moscow, in the southern Indian city of Bangalore.

The information technology hub of India is one big city in India that Russians have endeared themselves to on large part due to the pleasant climate. One such Russian expat in the city is 34-year old Elena Bannerjee, the owner of the Rolls United Cafe. Bannerjee, who hails from the Siberian city of Novosibirsk, set up the cafe along with her Indian husband Ashish.

Elena met her husband in Baltimore, where they were both MBA students. After a few years in quiet and peaceful Malawi, they decided to move to Bangalore, a city that is brimming with expats and a young population with global tastes and aspirations. Rolls United, which offers clients the opportunity to ‘travel the world, roll by roll,’ offers delicacies from a variety of countries and is not strictly a Russian cafe with items like enchiladas, Tibetan momos, Thai curries and lasagne being on the menu. But for the Russian and Russia-loving clientele, certain off-the-menu Russian specialities are prepared.

Bangalore’s small Russian community is closely-knit and includes software professionals, scientists, those working in joint Indo-Russian projects and a few monolingual Indo-Russian couples, who seem to have conquered the language bar. Homesick Russians in the city throng to the cafe to get a taste of golubtsi (cabbage rolls), stroganoff and central Asian shashliks (skewered lamb kebabs).  The clientele also includes Indians, who studied or worked in Russia and now crave for a nostalgic taste of the great white north.

Elena, who has lived in Bangalore for 4 years, is well-integrated in to Indian society and understands a bit of Hindi. A fan of the shorter form of cricket, Elena cherishes Indian cuisine and has become an expert in negotiating Bangalore’s traffic while driving through the city’s chaotic roads. Although Elena finds Bangaloreans to be hospitable and friendly, she’s sensitive to the traditional small-town values that a large number of people in the city possess. “I know it’s an open-minded city with a lot of expatriates, but I take care of my dress code over here as some people are traditional,” Elena says.

An increasing number of Russians are considering living in Bangalore, although the city doesn’t have the lure of a place like Goa. Margarita Shahmatova, a linguistics professional from Chelyabinsk, who visited family in Bangalore, says she would love to work for some time in the city. “I miss the place as if it were my hometown,” says Margarita.  “It’s the colours, the diversity and the small town feel of a big city that I really like.”

Ivan Kozhevnikov, a software engineer with IBM, who has been living on and off in Bangalore says the city offers the least amount of cultural shock for Russians. “The weather’s usually good, the crowds are much less than in Mumbai and the people, except the auto-rickshaw (three-wheeler) drivers, are really nice.” The 30-year old software engineer from Ryazan agreed that the city’s infamous rickshaw drivers don’t discriminate between Indians and foreigners when ripping off passengers.