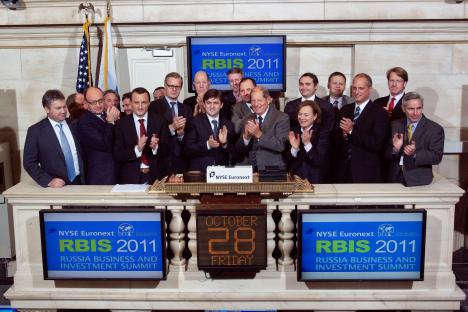 Participants of the Russia Business and Investment Summit at the closing bell. Source:Valerie Caviness

During a recent meeting in New York, Investors discussed new avenues for investment in Russia as well as the challenges businesses face in that market.

Russia’s popularity as an investment destination has suffered from its reputation as a country with a lack of law enforcement, a prevalence of corruption, and a government that likes to have a strong hand in the business sector. But participants in the Russia Business and Investment Summit, which took place at the New York Stock Exchange at the end of October, hoped to rehabilitate the country’s image by separating rumor from reality.

Read more in the RBIS blog :

The Russian Business and Investment Summit

“You can always use the bad example as a way to explain everything. Bad things happen here [in Russia] and in other countries; it does not mean that you cannot have success,” said Laura Brank, a lawyer with Dechert LLP, who has been working in Moscow for 16 years.

Brank said that as an investment destination, Russia should be compared to other emerging markets rather than developed Western economies.

“Big I.T. companies have reported greater success in combating counterfeiting in Russia than in other emerging markets such as China,” said Brank, speaking from the experience of one of her clients. “Investors should understand that Russia is a different legal environment. To be successful it takes time.”

" Over the last couple of years, there has been a great pick-up in the number of international issuers using the ruble bond market. We expect to see more [of them] coming.”

John T. Connor, portfolio manager with the Third Millenium Russian Fund, said that he had never had a corruption problem in Russia, although he suggested that small start-ups were probably more likely than big foreign companies to face that problem.

“I lived and worked in India, and the idea that Russia is more corrupt than India is a joke,” Conner said. “Sure, there is corruption in Russia, no question about it. But we even had it in New Jersey,” he added, speaking about his home state.

More and more firms are either having the experience that Brank and Connor describe, or deciding the potential of the market far outweighs the risk.

“Clearly the market has an appetite for the client size that Russia offers,” said Graham Marshall, head of the Russia and C.I.S. practice at BNYMellon. “There have been two large I.P.O.s from the entire European area, Rosneft and VTB, most recently.”

" I lived and worked in India, and the idea that Russia is more corrupt than India is a joke. Sure there is corruption, no question about it. But we even had it in New Jersey."

Said Ross Goodhart, principal at Siguler Guff & Company, which invests in Russia, “We don’t invest in government-regulated industries. There is more than enough to invest in Russia. The perception is that government is very invasive, but it gets involved in industries that are critical to state stability.”

Goodhart described Russia’s competitiveness for investment compared with other emerging economies as “high-margin businesses with a limited amount of capital targeting those companies.” He said that the Russian bond market is growing at rates similar to that of other emerging markets, and his view is backed by Standard & Poors, which rates Russia’s local currency bonds BBB, the same as Brazil and better than India, which has a BBB- rating. Despite this, according to Goodhart, in Russia, investors can enter the market more cheaply.

" There are some really world-class companies out there. It’s our responsibility to get the word out. Right now the only people interested are emerging-market funds.”

Other investment firms see opportunities in the growing Russian consumer market. Michael O’Flynn, managing director at UFG Asset Management, said that there is “a favorable environment for private equity in particular,” adding that his company likes to invest in everything that is connected with Russian consumer.

“There is a very vibrant consumer market in Russia,” said Joshua Tulgan, head of investor relations at MTS, Russia’s largest mobile network operator. Low consumer debt levels and a favorable regulatory environment for telecoms have made Russia a promising market, Tulgan said. MTS, which is listed on the New York Stock Exchange, earned more than $11 billion in revenues last year.

Boris Lipkin, with California’s Vantage Point Capital, said that although his firm is not investing in Russia yet, they are looking into it, which is one of the reasons he attended the summit.

Louiza Ferrara, vice president of Philippe Investment Management, headquartered in Paris, said that her company was interested in the summit because it gave them the opportunity to learn more about Russia, especially the energy and mining industries. “We want to know how these companies work with their clients, what are the new tendencies,” she said.