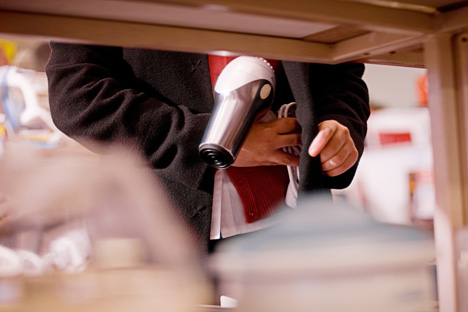 Retail networks lost $119 billion last year from shoplifting, and both customers and employees started stealing more, according to a study by The Global Retail Theft Barometer 2011 by Center for Retail Research, Nottingham. Russia is included in the study for only the second time, but is in second spot after India, up from sixth last year.

Most thefts are by customers

The study took in 43 countries from July 2010 to June 2011. The researchers consider all possible losses of large chains both from theft and negligence: small theft, organized crime, theft by employees, the suppliers, and losses through negligence of the staff.

The most popular things for the shoplifters are groceries (especially expensive meat and cheese), alcohol and cosmetics.

All over the world theft of toys rose by 18 percent in the last year.

There has generally been less theft last year, even though the 2009 results were better than the year before and were then seen as a sign of a recovering economy. And this year’s results could be interpreted as a sign of another slump, for example in Europe the general level of shoplifting rose by 7.8 percent, higher than the average rise of 6.6 percent.

Head of the center Joshua Bamfield said people felt let down by politicians and as if they had a license to steal, Komsomolskaya Pravda reported.

The least thefts are in Asia, which can be explained by the local mentality. In Japan, for example, there was very little looting after the tsunami.

Because the cost of theft is factored into prices by retailers, the world’s average family paid $200 to the thieves in the last year.

“The fact that Russia is among world leaders in shoplifting is a bad sign,” chairman of the board of International Confederation of Consumer Societies Dmitry Yanin told KP. “Because it is indicative not only of the crisis, but of the fact that normal human values are being lost. Apart from the British research, it is also seen in the number of people in tracksuits jumping the tourniquets in the metro.” He stressed that people should understand that the losses on theft are making the goods more expensive for honest customers.