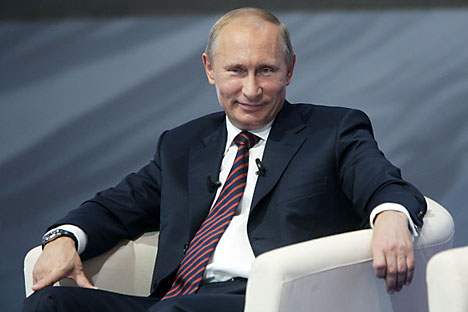 Russia is the number one BRIC country in terms of direct investment per capita, according to Frank Schauff, CEO of the Association of European Businesses.

“Today, foreign investors are interested in practically every sector of the Russian economy. The automotive industry and the consumer market are developing rapidly,” Dr. Frank Schauff, CEO of the Association of European Businesses (AEB) said in an interview with Rossiyskaya Gazeta.

As Europe struggles with the recession, investors are looking for new markets, and in this context Russia is very attractive because it has room for growth and its potential is far from exhausted. Prime Minister Vladimir Putin stated at the Russia Calling! investment forum that Russia’s economy is in better shape now than it was before the 2008 crisis. According to Rosstat, accumulated foreign investment in the country exceeded $300 billion at the end of 2010.

Remarkably, it’s been during the last few years that Russia has signed its biggest deals with foreign partners – i.e. during Vladimir Putin’s tenure as Prime Minister. Below are the top ten contracts in the space, aviation, arms, and even food and beverage industries. The deals are listed in ascending order of value.

In April 2011, Rosoboronexport signed a contract to supply 123 AL-31FN aircraft engines to China for a total of $500 million. Manufactured at the Salyut plant in Russia, the engines are widely used to power the J-10 and J-11 Chinese-made fighter jets (a modified version of the Sukhoi-27). The contract marks a breakthrough in military and technical cooperation between the two countries after a long hiatus.

The contract with NASA

Roscosmos has signed contracts estimated at worth more than $1 billion with the U.S. National Aeronautics and Space Administration (NASA). In April 2010, both agencies signed a $355 million agreement under which Russia will deliver astronauts to the ISS. An additional $753 million agreement was signed in March 2011. The Soyuz spaceships will bring 12 astronauts from the U.S., Canada, Japan, and E.U. to the ISS in 2014-2015 and will take them back to Earth in 2016.

The Superjet for Indonesia

In July 2010 at the Farnborough International Airshow, Sukhoi Civil Aircraft and regional Indonesian carrier Kartika Airlines signed a contract for the supply of 30 Russian-made Sukhoi Superjet 100 short-haul planes. Indonesia paid $951 million for the aircrafts. A year later, at the MAKS-2011 Airshow, personally attended by Vladimir Putin, another Indonesian airline, Sky Aviation, signed a hard contract for the supply of twelve baseline configuration SSJ-100s. The deal is valued at $380.4 million in current listed prices. Delivery of the aircrafts is scheduled for 2012-2015.

A French investor in AvtoVAZ

It was revealed in early March 2008 that after two years of negotiations, the French company Renault had bought a 25% plus one share in AvtoVAZ for around $1.2 billion. The Russian automaker has thus obtained a strategic partner, while Renault considers the Russian market its “number one.” The partners have jointly devised a development program for AvtoVAZ and begun to implement it.

During Vladimir Putin’s visit to India, on March 12, 2010, a $1.5 billion contract was signed for the supply of 29 carrier MiG-29K fighter jets to the Indian Navy. The deliveries are scheduled to start in 2012. This batch will be in addition to the 16 fighters India will receive along with the upgraded Admiral Gorshkov carrier. Some of the newly delivered jets will be based on the carrier, to be renamed the INS Vikramaditya once commissioned into the Indian Navy.

According to Vladimir Putin, investments in a new joint venture between Russian automaker Sollers and the American company Ford are estimated at a total of $2.4 billion. The Prime Minister has pointed out that in addition to the manufacturing of vehicles, the project is also important because it brings a new technology base to Russia, including an engine plant and an engineering and design center. Ford President Alan Mulally said that the Russian auto market will become Europe’s largest in a couple of years. Major automakers such as General Motors, Toyota, Volkswagen, BMW, Peugeot, Renault, and others have already set up shop in Russia.

Vladimir Putin announced on February 14, 2011, that the government would make more than $3.3 billion by selling 10% of VTB stock on global exchanges. The fund Generali became the largest investor with $300 million as a result of the offering. TPG Capital and the sovereign wealth fund China Investment Corp (CIC) invested $100 million each. Investors from all over the world expressed interest in the deal. For many prominent companies in the U.S., Europe, the Middle East and Asia, it was their first large-scale investment in the Russian economy.

An agreement for the American company PepsiCo to acquire a 66% stake in the food and beverage holding Wimm-Bill-Dann is the record high investment in Russia’s non-energy sector to date. The contract was signed last December. Wimm-Bill-Dann is Russia’s third largest soft drinks producer after Pepsi and Coca-Cola. Over the next five years alone the concern plans to spend more than $1 billion in technical upgrades, manufacturing, R&D, and developing a new sales plan.

The project to create an Indian version of a fifth-generation fighter based on the Russian-made T-50 will be India’s most expensive military program. Excluding joint development costs, the planned purchase of 250 jets will set India back some $25 billion. On October 21, 2010, Russia and India signed a $295 million preliminary design and technical development contract. At this stage, the Sukhoi holding is expected to carry out 80% of the work involved. Under the project terms, single-seat fighters will be assembled in Russia, while Hindustan Aeronautics will assemble two-seaters.

The Arctic, America, and oil

In August 2011, Russia’s Rosneft and the world’s largest privately owned company, America’s ExxonMobil, signed a strategic agreement on the joint development of huge oil and gas deposits in the Arctic. The partners will invest some $3.2 billion in geological exploration in the Kara and Black Seas. The American company will bear the costs at the initial stage. ExxonMobil will hold a 33.3% stake in the JV, while Rosneft’s share will be 66.7%. In addition, under the contract, Rosneft has been promised stakes in at least six projects in the U.S. in proportion to ExxonMobil’s stakes in Russian projects. Direct investment will reach $200-300 billion, potentially going as high as $500 billion if infrastructure is included.

So what’s the upshot? Of course, many large deals have fallen through, including with BP in the Arctic, Chevron in the Black Sea, and the loss of a bid to supply 126 fighter jets to India. Nonetheless, contracts are being signed, and whenever a really serious contract worth more than $500 million is involved, rest assured that Vladimir Putin had something to do with it.