The experiment is over 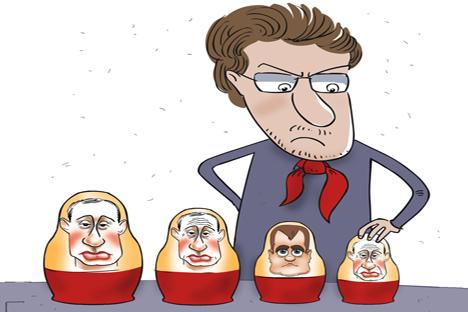 The Kremlin experiment came to an end. Drawing by Sergei Elkin

Members of Dmitry Medvedev’s own generation had hopes for his presidency. How do they feel now that he has decided to step aside in favor of Vladimir Putin, who belongs to another generation altogether?

In March 2008, when a popular vote confirmed Vladimir Putin’s choice of Dmitry Medvedev as the new Kremlin boss, “Ogonyok” magazine asked me to write an article of an uncharacteristic genre. Being roughly the same age and from a similar social background at Medvedev, the magazine requested that I try and identify the typical features of the time and space in which our generation grew up.

It was with some trepidation that I embarked on the task, because making generalizations is always risky, if not impossible. But, taking a trip down memory lane to my childhood years and youth, from primary school to Army service and university, I arrived at some things that I thought were essential for understanding the mentality of those whose representative had ascended the Russian throne in the early 21st century. Most important, I shared some thoughts on what one might expect from that generation.

The article (considering Dmitry Medvedev’s age at the time) was entitled “42: between the Soviet Union and Russia.” Today the president is 46, and one warm September day, he changed not so much his own fate as the perception of the three-odd years when “my generation” was at the helm of the world’s largest country. Well, at least it was assumed that it was at the helm. With the older generation now set to be back in control, it is interesting to see which – if any – of the predictions I made back then have come true.

I will start with the conclusion I arrived at then: “The Dmitry Medvedev generation, in spite of its youth, has lived through more than its share of dramatic events and cataclysms. So stability is not just a slogan but a genuine desire to avoid further upheavals.”

Well, my stability thesis hit the bull’s eye. Having said that, I must admit that I did not imagine at the time how great the desire for stability might be. Regardless of whether the “castling scenario” had been planned right from the start, as the Putin-Medvedev duo cheerfully indicated during the United Russia congress, or whether the decision was, after all, made more recently, the president is strikingly reluctant to even try to overstep the prearranged framework.

If this tendency is not attributed to Medvedev’s personal qualities, then it’s possible to invoke what might be called “the perestroika syndrome,” the legacy of the time when the president’s generation was entering adulthood. Memories are still fresh of the short distance from good intentions to the onset of catastrophe. This may be one reason for the fear of change that seems to paralyze the Russian leadership, which ardently believes that conservative treatments will somehow do the trick.

Incidentally, I felt that my peers, all of whom had at one time come to believe passionately in Gorbachev and then became profoundly disenchanted with him, would avoid the style that was peculiar to that period. Yet Medvedev has been compared to, of all people, Gorbachev, with whom he shared the ability to say all the ideologically right things with no follow-up. The two men also share a liberal quality that is, however, a bit too glib and extremely non-committal. (“Freedom is better than no freedom” is a slogan that could have easily become part of the lore of the late perestroika period, because it makes absolutely no sense). The two men are also both friendly towards the West. Yet, unlike Mikhail Gorbachev, who proposed some ideas, naïve though they might seem in hindsight, Dmitry Medvedev’s attitude has been one of polite and politically correct indifference, in striking contrast to Putin’s rough-and-ready manner.

One more quote from my 2008 article: “We have been inoculated against naivety of any kind, we have become mistrustful because too many fine and convincing words have been said from television screens and at rallies, too few of which turned out to be truthful and sincere. I have a feeling that this generation will not produce a person capable of formulating a new political vision whose leitmotif would be pragmatism and calculated use of the opportunities that open up. An allergy to pathos is a reaction to all sorts of both Soviet and post-Soviet lies, be they pro- or anti-Communist.”

No, such a person has not come along. We have parted with naivete, and sincerity, too, has become something of a luxury. True, Dmitry Medvedev had no allergy to pathos although, because of his temperament, his ability to empathize appeared somewhat strained. In fact, his new vision boiled down to little more than pathos: modernization has become another notion successfully discredited in the late years of the Soviet Union and in the new Russia: from socialism with a human face and perestroika to democracy and the market.

Can Medvedev’s position be regarded as pragmatic and well-considered in terms of making use of available opportunities? After September, the logic that had guided him from the start has come to look rather fuzzy, but it was obviously not the logic of power. In any case, he decided against using the main opportunity that opened up to him and become a real president. Maybe it was not the case, but looking from the outside, it seemed that his chances were very real.

For our generation, Dmitry Medvedev’s presidency is more of a negative symbol of the limited opportunities to fulfill one’s potential. It turns out that the rule of the 40-year-olds is a strange intermezzo, a failed experiment, after which the “older comrades,” the baby boomers, are reclaiming their legitimate place. They are still in the prime of their lives and they have no intention of letting the reins slip from their hands. Evens so, they will some day be replaced, and not by today’s 40-year-olds, but by younger people – people in their 30s, whose ambitions have been formed in the new Russia. Or “by the freedom generation,” which never lived in the Soviet Union and perceives the world through gadgets. Incidentally, I get the impression that Dmitry Medvedev, who is obsessed with modern communications, was their kind of president, and the only group that seriously lament his departure consists of the personable hipsters, who thought he was cool and modern.

In spring 2008, I wrote that our generation was one of transition from the Soviet Union to Russia. This has its pluses and minuses, but transition means basically that something new and different is to follow. In fall 2011, paradoxically though it may seem, I have to admit that it is going to be a transition backwards in time. The favorite topic recently has been stagnation and Brezhnevism. The Soviet generation, as represented by Vladimir Putin, is back in the driver’s seat. That generation is perfectly happy with the current state of affairs, because all the dreams of its youth have come true. It would be folly to forego the opportunity, and there is no reason to take risks.

The trouble is, however, that the post-Soviet era (for which the reference point was the Soviet Union, its existence and collapse) is over. Along with the crumbling Soviet infrastructure, which has exhausted its potential, any ideological or political concepts borrowed from that time or imitating them are becoming irrelevant. The new generation of more forward-looking leaders, which Dmitry Medvedev appeared to represent, has for some reason failed or chosen not to make this breakthrough. One has to conclude that it has chosen to be under the mantle of those who will inevitably hark back to their youth, their upbringing and education to draw inspiration for fresh endeavors there – even if past recipes are no longer applicable and instincts have been become blunted.

I concluded my article back then by suggesting that, although our generation was unlikely to accomplish anything spectacular, “the energy pent up during the preceding period can be channelled in a constructive direction.” This statement might as well provide a fitting conclusion to this article. The possibility cannot be ruled out that Dmitry Medvedev himself will be trying to explore new avenues. On the historic day of the “castling move,” my colleague Vyacheslav Nikonov suggested that the configuration of Russian power for the next 24 years has been fixed: 12 years under Putin followed by 12 years under Medvedev. It occurred to me that, by the time that period is over, I will be 69. Well, considering the progress of medicine, there will still be time to direct the “untapped energy” of my generation along constructive channels.

Originally published in Russian in the Ogoniok magazine