BRICS use eurozone crisis to come into their own 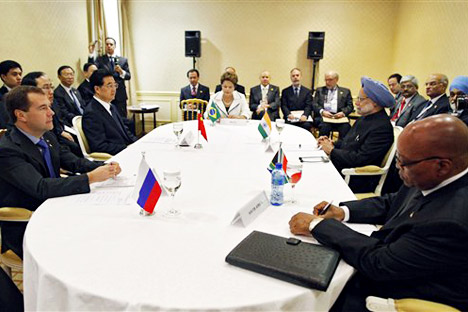 Although individual BRICS countries had made offers to help the EU, the decision on the sidelines of the G20 summit to act collectively shows that the group is becoming a real global player.

The only significant decision to come out of the Cannes G20 Summit was made not at the summit itself, but at a meeting on the sidelines. The BRICS leaders, during a separate conference during the summit, decided to work out a common position on the Eurozone’s problems – a move that shows that the group is becoming a real global player.

The central issue under discussion at the summit was the national debt plaguing the Eurozone members. In the final declaration, the G20 leaders merely said that they were committed to increasing IMF resources (clearly with an eye to helping the EU countries), but gave no concrete details, and welcomed the resolve of the European countries to defend the euro.

Major emerging markets have a stake in preventing a financial disaster in Europe because it would inevitably spread to other regions. The EU is a key trading partner for the BRICS. The EU’s trade with China stands at 35.6 billion euros ($49 billion) – 800 million euros ($1.1 billion) more than its trade with the United States. The eurozone also accounts for 50 percent of Russia’s foreign trade.

So, if the Greek scenario spreads to other debt-ridden EU countries, a new world financial crisis is guaranteed. Experts calculate that, in order to deal with the problem, 1 trillion euros ($1.4 trillion) will be needed before the end of this year and a further 1.5 trillion euros ($2.1 trillion) next year. The European Financial Stability Fund (EFSF) cannot resolve this problem alone. There is growing talk on the market that the eurozone cannot do without outside help, including from the BRICS countries.

BRICS countries have been discussing options for helping the Eurozone since September. IMF head Christine Lagarde has supported the group’s efforts, which is notable because cooperation with the IMF is necessary for delivering any aid the BRICS decide to provide.

“Financial support for the Eurozone by major emerging markets is highly probable” according to Bogdan Zvarich, chief analyst with Net Trader company. “The forms may vary: loans from individual BRICS countries through IMF mechanisms, purchase of the problem countries’ debt instruments… In fact, China has already embarked on this road.”

Beijing has already bought 100 billion euros ($137 billion) worth of Italian debts, and EFSF head Klaus Regling has held talks in the Chinese capital on a further $100 billion loan to the fund. And in mid-October, Russia indicated that it was prepared to lend the Eurozone $10 billion, and during the summit, Russian President Dmitry Medvedev reaffirmed that this was a possibility.

But the decision by the group to act together represents a new phase in the development of the BRICS from a constructed collective of emerging economies to a global economic and political force.

“The appearance of a common BRICS position means that its status is rising to that of a real global player. It is worth the effort. These countries can meet the challenge,” said Nikita Maslennikov, adviser to the Russian Institute of Contemporary Development. He describes the decision to hammer out a common position as “the start of the process of BRICS positioning itself as a subject of geopolitics. It is already a player in the world economy but it has yet to emerge as a player in global politics.”

“The overall picture shows that BRICS countries tend to solve issues collectively. That means that BRICS will channel its aid to the Europeans through the International Monetary Fund,” Maslennikov said.

On Nov. 7, Russian Foreign Minister Sergei Lavrov effectively confirmed that the world’s biggest emerging economies were ready to give financial assistance through the International Monetary Fund.

“Such a possibility [BRICS assistance to the Eurozone] does exists,” the minister said. “Our countries are ready to take part in these combined efforts, including by issuing loans through the channels at the disposal of the IMF.”

“I think BRICS aid to the European Union is a distinct possibility,” said Andrei Mordavchenkov, financial markets operations director with the Partner company. It can be channeled either through the IMF, that is, in the shape of credits or the like, or through purchase of the much-touted European Union bonds.”