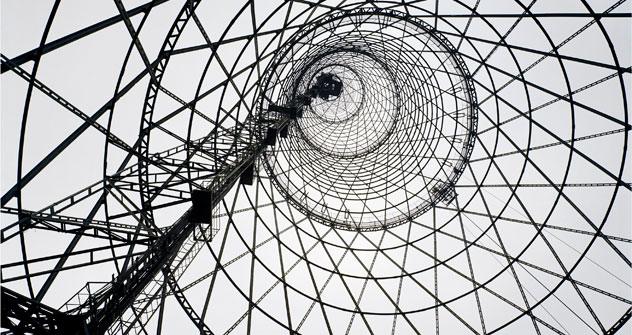 Exhibition of Soviet art and architecture opens at the Royal Academy of Arts.

A model of Vladimir Tatlin’s planned 1920 “Monument to the Third International” currently dominates the courtyard of London’s Royal Academy. The spiraling steel and lopsided dynamism of Tatlin’s tower contrasts brilliantly with the symmetrical classicism and colonnaded façade of Burlington House. The project of recreating one of the symbols of the early Soviet era complements the RA’s exciting new exhibition of constructivist architecture, “Building the Revolution,” which runs until Jan. 22, 2012.

Reactions to the tower in the courtyard vary hugely, from couples enthusiastically photographing themselves in front of it to old ladies shaking their heads and muttering. These differences reflect the wider debate about the works on show inside the academy. Constructivism, an experimental attempt to create a utopian architecture, is an acquired taste. With their uncompromising concrete facades and deliberate lack of embellishment, these buildings are not a populist choice for preservation campaigns. Part of their appeal lies in the radical rethinking of form and function that inspired them, producing what Owen Hatherley in the Guardian called: “probably the most intensive and creative art and architectural movement of the 20th century.”

“Society underestimates the value of Russian avant-garde architecture,” said Vitaly Stadnikov at the inaugural lecture in a series accompanying the exhibition. Stadnikov, a Moscow-based architect, campaigns to save the Soviet heritage of his native Samara, including a huge hammer-and-sickle-shaped factory cafeteria. His talk and slideshow at the Pushkin House cultural center illustrated the ideals and ideology that inspired these buildings: the logistical challenge of producing 9000 lunches a day or the political will to release women from household chores. Other lectures will include a variety of perspectives; there is even a family workshop in January where you can build your own Tatlin tower. There are talks that cover more controversial aspects. Clementine Cecil’s lecture looks at the older buildings that were demolished to make way for these pioneering experiments. The last event in the series is a discussion that asks simply “Constructivism: What are we trying to save?”

The influence of French architect Le Corbusier is clear (in fact he built Moscow’s massive, red brick Union of Cooperatives pictured in the exhibition), but this was a time when Russia led the artistic world. Almost every modern and postmodern trend was anticipated during the years between the futurist and suprematist movements of the 1910s and Stalin’s rejection of constructivism in the 1930s.

These early Soviet monuments were built to support post-revolutionary life: apartments for communal living, bakeries to cater to the masses and press offices to spread the good news. The RA’s celebration of the utilitarian elegance of these buildings is organized thematically by function with separate halls dedicated to communications, industry, health and housing.

The exhibition includes vintage photographs from when these clubs and cafeterias, towers and turbine halls were first built, alongside Richard Pare’s images of the same structures seven decades later. Despite the fact that the selection tends to favor the aesthetic over the academic, it is clear how many of the buildings have suffered from neglect.

Pare’s poster-perfect captures are the largest and most striking images in the show: the mesmerising hyperboloids of Vladimir Shukhov’s Radio Tower or the light-filled studio of architect Konstantin Melnikov’s house; the Sochi sunset over the palm-planted Voroshilov Sanitorium or Lenin’s tomb on a crowd-free Red Square.

Architectural expert and campaigner Clementine Cecil calls Melnikov’s house “an icon of modernist design and one of the most fascinating examples in the world of an architect’s own house.” Two interlocking cylinders with diamond shaped windows form an extraordinary space. Likewise, the Rusakov workers’ club, with its lotus-like petals echoing the shape of the auditoria inside is a lovely example of form and function in harmony. It is harder for a layperson to understand the value of a derelict factory or crumbling apartment block, especially as these works do not tend – in Cecil’s words – to “support the patina of age with grace.” This exhibition helps by setting them in an aesthetic context.

The weak point of the exhibition – if there is one – is that the futurist paintings and drawings on show are only rather vaguely connected to the architecture in question. The geometric, modernist works, selected from the wonderful Kostakis collection in Thessaloniki, certainly form an appropriate background for the buildings photographed. Many of them also have suitable titles, like Lyubov Popova’s series, “Painterly Architectonics,” but co-curator MaryAnne Stevens’ promise to explore “the interplay between art and architecture during these heroic years” never really materializes. Stevens is forced to rely on such metaphorical links as “echoes,” “redolent of” or works being “set in dialogue with” each other. This vagueness scarcely detracts from the exhibition’s impact. In fact it reinforces the sense of a powerful, but impressionistic survey, underpinned by precise and original material from Moscow’s Shchusev Museum of Architecture.