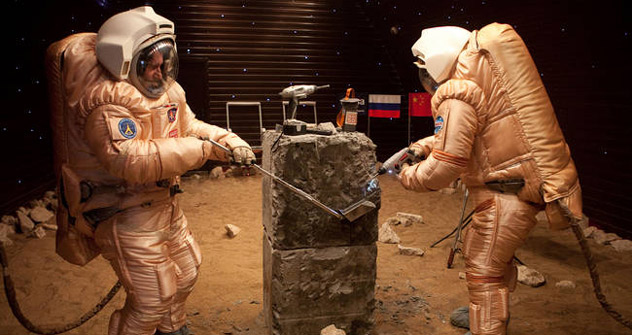 Project Mars 500, the experiment that simulated a year-and-a-half long trip to the Red Planet, has ended.

The Mars-500 experiment, intended to test the psychological and physical reactions of astronauts, ended Nov. 4 with the virtual re-entry to Earth. Source: IMPB/Oleg Voloshin

A year and a half has passed since the astronauts of Mars-500 virtually left the Earth, headed to the Red Planet. Over 520 days, Frenchman Romain Charles, Italian-Colombian Diego Urbina, Wang Yu of China, and Russians Alexander Smoleevsky, Sukhrob Kamolov, and Commander Alexei Sitev, simulated all aspects of spaceflight while remaining solidly attached to the hangars of the Russian Institute for Biomedical Problems in Moscow.

The simulation, designed to test the psychological and physical reactions of astronauts during a hypothetical trip to Mars, ended Nov. 4 with the virtual re-entry to Earth. After emerging from their capsule, the participants appeared pale and thin, but smiling.

“It’s a unique project,” said Boris Morukov, the director of the experiment. “The results are beyond satisfying, although we’ll have to wait several months before we can publish the official data. But, there’s no real need to hurry,” he joked, “Since it will be another 20 years before we reach the real Mars. Nevertheless, after this experience we feel a little closer to the Red Planet.”

The crew remained isolated from the rest of the world for 17 months, breathing artificial air, rarely bathing, and eating mostly freeze-dried food. They were allowed occasional brief communications with scientists and family members, which were received with a “space” delay of 40 minutes.

The participants underwent daily tests, but spent most of their time exercising, reading books and studying foreign languages. Chinese, however, remained a “mission impossible.” Our colleague Wang Yu tried in every way to teach us Chinese,” said Alexander Smoleevsky. “It was a complete failure.”

Despite some ups and downs, there were no serious problems among the roommates. “Being together with people of different languages and cultures made the cohabitation easier,” said the youngest member of the group, Diego Urbina. “Days passed pretty much the same way: We worked eight hours a day. After the first morning tests, we had breakfast together and then usually started the experiments. In our free time we read or played videogames.”

Even after their virtual re-entry to Earth, the participants continue to look with much curiosity toward the planet they visited, if for now only virtually. “We’ll have to wait many years before mankind can land on Mars,” concluded Romain Charles. “But with this experience we took great steps forward. This planet is now much closer to Earth than it seemed before.”