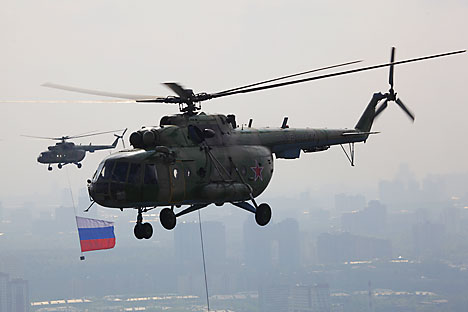 India is one of the world's largest Mi-8 and Mi-17 operators with over 200 aircraft in service. Source: ITAR-TASS

India is close to finalizing a second contract with Russia for another 59 Mi-17V-5 tactical transport helicopters after the phased delivery of the first 80 of these choppers began this fall, The Times of India reported on Sunday.

A senior official at the Indian Defense Ministry confirmed to RIA Novosti that India was negotiating the purchase of an additional 59 helicopters from Russia. "The 59 more Mi-17s, which will cost around $1 billion, will be ordered under the follow-on clause in the first contract. They will also be weaponized for combat operations like the first 80," the paper said, referring to a well-informed source.

"The negotiations are, indeed, going on. Possibly, a contract on the delivery of this additional batch of Mi-17 helicopters will be signed already this financial year, i.e. before March 31, 2012," he said.

The Mi-17V-5 is designed for utility cargo work and can carry up to 36 passengers or four tons. The machine features advanced multifunction cockpit displays and upgraded TV3-117VM engines.

India is one of the world's largest Mi-8 and Mi-17 operators with over 200 aircraft in service. The Mi-8/17 family is the most widely produced helicopter design in history, with over 11,000 delivered to more than 110 countries.