Being Indian in Vladivostok 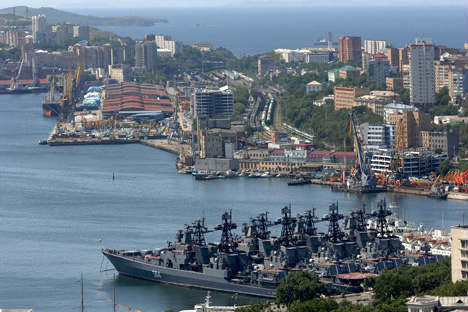 Vladivostok, which was closed off to foreigners for over 50 years, is quite used to seeing tourists from Europe and North America. Indians, on the other hand, tend to be a rare and exotic species.

The drudgery of Sakhalin Island in late-April with its snow storms and winter weather was one major reason that I would take the first flight in May out of Yuzhno-Sakhalinsk to Vladivostok. ‘Vladik’ in early-May is warm, beautiful and romantic, with the sun setting into the Amur Bay well past 9:30 pm. It’s also the first real opportunity for a Sakhaliner to walk out on the streets without wearing 4 layers of clothing.

Being an exotic person, I would often be stopped by curious locals, who wanted to know where I was from. This would be followed by polite requests to pose for photographs. This is something I would never turn down.

My requests for directions in Russian would be met with joy but many a local would be more than happy to explain in English, as it was a good opportunity to practice the language. I never felt unsafe or threatened during the daytime, but as the day turned into night, the university students would use the May holidays as a great opportunity to get drunk and “wild.” If there is 1 thing I learned in Russia, it was to be wary of “friendly drunks.”

So here’s the scene: a few local friends and I are buying some wine and chocolates in a corner shop, when a group of drunk and excited students walk in. “Nyegar,” shouts a student, meaning no offense. It was pretty difficult for me to not laugh but I managed to control myself. However, one of my local friends took great offence and explained that I was an Indian and not an African (Nyegar being the Russian word for African). This provoked a strange reaction and suddenly, I was hugged by this enormous young man, who told me that he served with the Russian Navy in Madras in 1986. He looked all of 20 years old, but I guess he did visit the southern Indian city in a previous life!

All seemed fine, until Pasha, a 6 foot 7 inch giant, who was a friend of the first drunk, approached me and starting mimicking a Hindi film dance. The lady in the shop asked Pasha to back off, but he was defiant. He started talking about Hindi film actor Mithun Chakraborty and a film called “Disco Dancer.”

Much to my relief, the group left the shop and I thought I could get on with the evening in peace. But they waited for me outside and demanded that I drink some vodka with them. I was a guest in their country and needed to accept their warm hospitality. After 2 shots with salutes to the great Russia-India friendship and individual and group photos in 6 cameras, I was finally ‘allowed’ to leave.

The night was still young and I met another group of people, who at first thought I was an American and complained to my friends about too many “Americozes” visiting Russia. When they found out I was Indian, there were more photo sessions. I quite enjoyed the “special treatment” and by staying calm and maintaining good humour, I was probably a good ambassador for India.

As is the case with most places in the Russian Far East, residents of Vladivostok are extremely friendly and the ability to understand Russian humour will go a long way in building bridges.