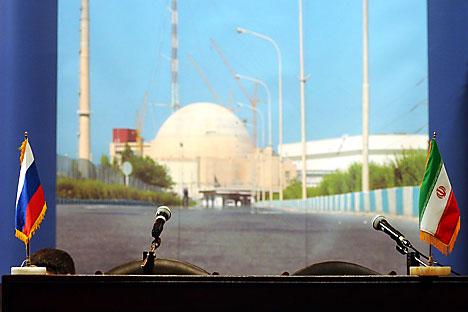 Iran is making a strong push to secure Moscow's backing in a global diplomatic fight, asking Russia to build more nuclear reactors in Bushehr and permission to join the Moscow-backed Shanghai Cooperation Organization.

But the Russian leadership is unlikely to take sides, opting instead to reject both sanctions and explicit cooperation with Iran in a pre-election show of force, analysts said Thursday.

Iran's bid to become the seventh full member of the Shanghai Cooperation Organization was announced by the deputy head of Iran's National Security Council, Ali Baqeri, who said during a visit to Moscow that the request had been filed.

It was not clear Thursday when the bid might be considered.

Established in 2001, the organization includes the four Soviet republics of Central Asia — Kazakhstan, Kyrgyzstan, Tajikistan and Uzbekistan — as well as Russia and China, which are both permanent members of the UN Security Council with veto power.

Billed as a security group, the Shanghai organization has not participated in any armed conflicts, though it has staged military exercises. The loose bloc is seen as an attempt to give geopolitical representation to Central Asia, counterbalancing Western influence in the region, but economic disparity and the conflicting interests of the members have prevented it from posing a challenge to NATO, the EU or the United States.

Iran has observer status in the organization, along with India, Mongolia and Pakistan.

"Through participation in a regional bloc, Iran gets legitimization as a global player, refuting American allegations of it being a 'rogue state,'" said Vladimir Bartenev, an international affairs analyst with Moscow State University.

But the bid is likely to be mothballed because embracing it would mean explicitly siding with Iran against the EU and the United States, said Bartenev, who heads the Center for Security and Development Studies with the university's world politics department.

Separately Thursday, Rosatom chief Sergei Kiriyenko told Prime Minister Vladimir Putin during a Cabinet session that Iran has asked Russia to build more reactors for the Bushehr nuclear plant. He said his agency was considering the proposal, given that "construction of nuclear reactors raises no doubts with the global community," RIA-Novosti reported.

He gave no details, but an Iranian opposition group, the Green Movement, said this week that the deal might be worth $40 billion and include the construction of five all-new nuclear plants.

In 1995, Iran contracted Russia to complete the nuclear plant in Bushehr, which had been in the works since the mid-1970s.

The United States and Europe tried to halt the construction, fearing that it would help Iran obtain technology for a nuclear weapons program.

Iran and Russia have said more reactors might be built, but no strong commitment has been voiced.

This week's developments come against a backdrop of a heated squabble in the UN Security Council, where the United States and its European allies are pushing for a new package of sanctions against Iran over its purported plans to create a nuclear bomb.

The UN's nuclear security watchdog, the IAEA, released its latest report on Iran's nuclear program this week. The report, which has been censored for public release, said Iran worked on a bomb until at least 2003 and may be continuing the program.

The United States has accused Iran of developing nuclear weapons since at least 2002. Several previous checks by the IAEA from 2007 to 2009 failed to provide a conclusive answer.

This week's report said Iran hired "a foreign scientist" to help with its nuclear program. The man was later identified by The Washington Post as Vyacheslav Danilenko.

But Danilenko, a 76-year-old retired Soviet researcher in the peaceful field of nanodiamonds, denied any involvement. "I am not a nuclear scientist, and I am not the founder of the Iranian nuclear program," Danilenko told Kommersant in an article published Thursday.

Iran's Baqeri condemned the IAEA, saying Thursday that "the IAEA report was aimed at breaking up an initiative" by Russia to solve Iran's nuclear program through negotiated compromise.

The IAEA's findings were impressive enough for Israel to begin preparing a surgical strike against Iran's nuclear facilities, several publications, including Britain's Independent and Daily Mail, said this week.

Israeli fighter planes may strike before the end of the year, with logistical backing from the United States, an unidentified British senior military officer told The Independent.

Israel successfully executed similar strikes against facilities in Iraq in 1981 and Syria in 2007, though the Syrian leadership denied the bombed facilities housed nuclear research.

Baqeri said in Moscow that an attack would be an "oversight" that could lead to the total obliteration of the "Zionist regime," Reuters reported.

Russia has insisted on a step-by-step diplomatic solution of Iran's nuclear problem. The Foreign Ministry denounced both war rumors and the IAEA report in a harsh-worded statement Wednesday.

Russian and Chinese diplomats said in a joint statement late Thursday that they oppose any new sanctions on Iran over its nuclear program.

Russia is likely to side with Tehran, but in a peacekeeping role, thus allowing it to prove its clout by obstructing Western efforts to crack down on Iran, said Bartenev, the analyst.

"Unlike in 2010, when Moscow and Beijing eventually went along with UN sanctions, Russia is unlikely to give in this time," he said.

Russia needs to prove its global influence after backing down over Libya in the UN Security Council this year, allowing a UN-sanctioned NATO operation to topple the government, he said.

A show of force is especially important ahead of the presidential election in March when Prime Minister Vladimir Putin, who has taken a hawkish stance in the past, is poised to return to the Kremlin, Bartenev said.

Theodor Karasik, senior analyst at the Enigma think tank in Dubai, said the Russian position might harden as the March election approaches, but the Kremlin would continue to seek a diplomatic solution. "Moscow is likely to play middleman, trying to find a diplomatic solution while continuing to reject any more sanctions against Iran," he said.

The analysts said the possibility of a military operation against Iran remains faint at best.

With the hints of airstrikes, Israel is actually pushing the international community into implementing sanctions to avoid the attacks, Bartenev said.

Russia would not back war, despite speculation that it stands to benefit if oil prices top $200 per barrel as expected in a military conflict in the region, he said.

Ensuing instability in the Middle East would outweigh any economic benefits, a fact well understood by the Russian leadership, Bartenev added.

Karasik, however, said Moscow might benefit from a conflict. "Russia would obviously act as the voice of sanity during the ensuing carnage and come out ahead in the Middle East without firing a shot," he said.