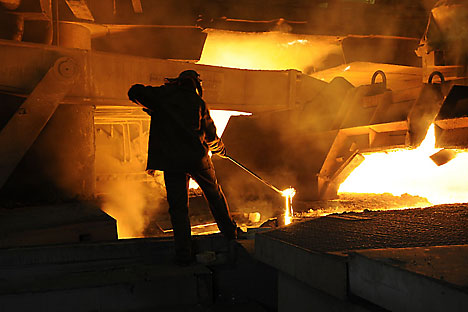 State-owned Indian miner NMDC Limited and Russian steel and mining giant OAO Severstal have signed the implementation protocol in Moscow, in a move ahead on the December 2010 memorandum of understanding (MoU) for establishment of a steel plant with initial capacity of 3 million tonnes in Karnataka.

Beni Prasad Verma, Steel Minister of Indian Government, a leader of the delegation comprising P.K. Mishra, Secretary of Ministry of Steel, Ravinesh Kumar, PS to the Steel Minister, and other officials, held discussions 12 November with the Russian Minister of Industry Viktor Khristenko on fostering relationship between India and Russia in the steel and mining fields.

The Indian Steel Minister, in his turn, highly appreciated the Soviet Union’s contribution to the development of the Indian steel industry, including technology and equipment support, and said that the recent agreement between NMDC Limited and OAO Severstal to set-up a joint steel plant in Karnataka will get the full support of the Indian government.

Under the protocol, both companies would fully meet the joint venture's captive requirements of both iron ore and coking coal so that it becomes completely integrated for these primary raw materials. Till the full development of the captive assets, both the companies would be responsible for supplying inputs to the proposed joint venture on a market basis from their existing assets or alternative sources.

Rana Som, chairman and managing director of NMDC, confirmed that the company was working towards fulfilling its dream to make the project not only financially strong but also to emphasize its social meaning and economical relevance for the needs of India.

P.K. Mishra said that the joint venture of Severstal and NMDC will be another milestone in the Indo-Russian economic cooperation and will be a significant contribution to the Indian steel industry.

Both sides arranged to explore the range of further cooperation between India and Russia in the coking coal and mining sector.