Vladivostok: Lording over the East 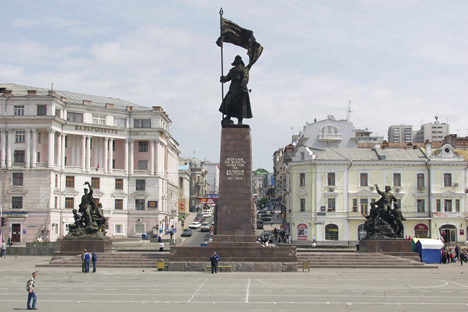 Vladivostok, fondly called Russia’s ‘Wild East,’ reminds one of San Francisco with its stunning rollercoaster hills and the dreamy blue Pacific Ocean, but remains a quintessential Russian city, firmly moored in its traditions and history.

A spectacular setting of hills and peninsulas, bays and outlying islands, a thriving student life, combined with buzzing oriental markets and a distinctly European feel in an Asian landmass make Vladivostok one of the greatest cities in Russia.

With its trams, hilly terrain and stunning views of the Pacific Ocean, the ‘Lord of the East,’ founded in 1860, is redolent of San Francisco. The city, however, has a quintessential Russian feel with central Vladivostok boasting of a collection of colourful, elegant and grandiose pre-civil war buildings. Architecture-lovers can spend hours in the Svetlanskyaya and Aleutskaya streets, home to many buildings designed in Czarist Russia and symbol of an era when aesthetics mattered. Yul Brynner lived in house number 15 on Aleutskaya Street. The grand four-floor mansion has been restored to its original glory, although there is no museum in honour of the legendary actor. Residents of the city grudgingly admit that the star of the ‘King & I’ and other Hollywood classics was actually not born in the city, but across the Tatar Straits on Sakhalin Island.

Raj Kapoor, Mahatam Gandhi and vegetarian food – Indians are sure to feel at home in this pulsating city. The Indian Consulate in Verkneportavaya Street takes care of Indian citizens in the vast Russian Far East and issues an increasing number of visas to Russians. The city also has a Russia-India Friendship Association, which organises cultural programmes from time to time. This year, the Arsenev Museum marked Mahatma Gandhi’s birthday with a roundtable meeting on the philosophy and strategy of non-violence. India’s connections to the city go back to days of the Soviet Union, when Indian ships were occasionally allowed into the city’s harbour. Many a proud 50-something resident of the city will talk about how the Soviet Pacific Fleet was on call to defend India during the 1971 India-Pakistan war, when the US sent its 7th Fleet to the Bay of Bengal. The Hare Krishna Cafe remains a favourite among the city’s vegetarians and for those looking to indulge in North Indian curries and kebabs. There is an Indian restaurant called Bombay-1 that caters to the Indian palate’s craving for spicy food. And like in other parts of Russia, legendary romantic actor Raj Kapoor is popular among the older generation, while the late-20 somethings are fans of Mithun Chakraborty, famous here for his film Disco Dancer.

Right in the heart of Svetlanskaya Street is the Arsenev Regional Museum, named after the great ethnographer, explorer and writer Vladimir Arsenev, who wrote ‘Along the Ussury Land.’ The museum has a rare collection of photographs dating back to the founding of the city. There is an interesting collection of civil war photographs and some with the insignia of the ‘Far Eastern Republic’, a country which existed for two years before being annexed into the Soviet Union.  The Arsenev Museum also has a small but nice natural history section, with an exhibit of an Amur Tiger and Brown Bear in mortal combat.

Also in the city centre is Vladivostok’s answer to Moscow’s Arbat: The Admiral Fokin Street. The city’s Arbat is full of shops, cafes and fountains and goes one up on its Moscow cousin as it leads straight to the sea. For those of you looking for a quintessential Far Eastern Russian meal, the Izbushka (log cabin) cafe is an ideal place to enjoy some Ukha (fish soup), while listening to folk songs from the region. Patrons can choose a ‘dacha’ room or a ‘forest’ room for more privacy.

The Admiral Fokin Street is also the best place to enjoy public celebration, be it the New Year, when reindeer and Ded Moroz (Grandfather Frost) roam the area or the May Day festivities, when rock bands celebrate the near arrival of the Primorye summer.

Vladivostok exudes youthful energy, largely in part due to many institutions of higher learning in the city. The university students are used to exotic visitors but are friendly enough to invite them for evening parties (see related blog). The best way to get to the Far Eastern Technical State University is to take the funicular (one of only two in Russia). The ride to the top of the 100-metre high hill lasts just over a minute, but there are absolutely stunning views on top.

Trans-Siberian Railway is the longest in the world. It connects Moscow and Vladivostok

Besides providing a visitor a chance to inspect some ships belonging to the Russian Pacific Fleet, the hill-top provides a lovely view of the railway station, a heritage building construction built in 1912, the regional administration building and a gigantic monument dedicated to ‘the Fighters for Soviet Power in the Far East.’ All three sites are worth visiting on their own at sea level. Most visitors enter the city via the great Trans Siberian Railways, which terminates in the city. The square housing the monument to the fighters holds a weekly market on Fridays, where indigenous and local handicrafts can be purchased.

Vladivostok is surrounded by 16 imposing forts, most of which were built to protect against potential Japanese invasions. The best night views of the city can be seen from fort number 7, which is about 15 kilometres to the north of the city. While the fort is officially closed at night, that doesn’t stop Russian students and youth from getting up there for absolutely dazzling views of the city, the Golden Horn Harbour and the Amur Gulf.

For those that want a room with a sea view, the city has plenty of options including the Amursky Zaliv Hotel, which is perched atop a cliff and the Primorye Hotel, tucked away in a peaceful street. This writer prefers the Vladivostok Hotel, an institution in the city, which was once the most prestigious hotel in the Soviet Far East. The rooms have a great view of the Amur Gulf and the government-run hotel is within walking distance of both the railway station and the Admiral Folkin Street.

No visit to Vladivostok is complete without a visit to nearby scenic places. The Shamora Bay, which has played host to some of the biggest rave parties in the region, has some gigantic cliffs with breathtaking views of the sea. While Shamora is a good place to have a pre-sunset picnic, the evenings are also well-spent in the sanatorium, which is adjacent to the Russian Academy of Science. The main building in the sanatorium resembles one of the great palaces of St Petersburg.  Both sites are on the same line of an electrichka (electric train), in which ticket-less travel seems to be the norm.

The best beaches near Vladivostok are on the Popov and Russky islands. There are regular ferries to both islands from the city’s ferry station. While Popov Island has a few guesthouses and is a more popular tourist destination, Russky Island, once closed to foreigners, is a hub of activity as it prepares to host the 2012 APEC Summit.

The city was closed to foreigners for over five decades, but the Russian government is now trying to pitch the city as a gateway to the Asia-Pacific Region. The city is closer to Seoul, Tokyo, Beijing, Shanghai and Pyongyang, than it is to Moscow, making it an ideal entry point for Asian businesses to enter Russia. Several countries, including Australia and India, have consulates in the city, which is poised to be an economic hub linking Europe with the Asia-Pacific.

Trade and commerce aside, given the city’s historic landmarks, natural beauty and cultural activity, it is no surprise that Vladivostok is one of the most sought after cities for adventure-seeking travelers.