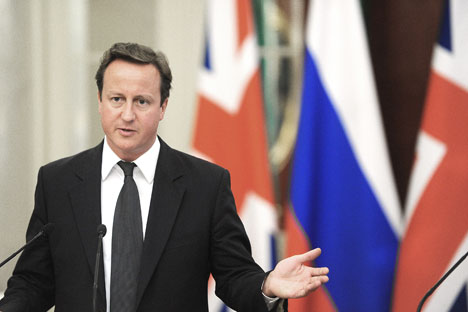 Prime Minister David Cameron's visit to Moscow in September had opened the way to a positive shift in political and economic Russian-British relations. Source: AP

Traditionally conservative British companies are being drawn by Europe's problems and general fears of a global economic slowdown to markets usually considered too risky, Stephen Dalziel, executive director of the chamber told The Moscow Times during the annual RussiaTALK investment forum.

"I've never known so many British companies enquiring about doing business in Russia," Dalziel said. He said interest was particularly high in the pharmaceutical and real estate sectors.

Addressing an audience of Russian and British businessmen, Denis Keefe, charge d'affaires at the British Embassy in Moscow, said that while both Russia and Britain were largely insulated from the current turmoil in Europe, both faced a period of "painful adjustment."

There has also been a slight clearing of the political air between Russia and Britain in recent months following the visit of Cameron, who met with President Dmitry Medvedev and Prime Minister Vladimir Putin on Sept. 12.

Russia installed a new ambassador to London, Alexander Yakovenko, last year. Tim Barrow, who is replacing Anne Pringle as Britain's ambassador in Russia, arrived in Moscow this week. He will be officially received by the Kremlin on Wednesday.

Six hundred British companies operate in Russia, and British exports to Russia increased 63 percent to £2.1 billion ($3.3. billion) in the first six months of 2011, Keefe said. But although Russian companies make up 25 percent of all foreign listings on London stock exchanges, Russian direct investment in Britain is low, amounting to a total of less than £1 billion.

Peter Mandelson, former British business secretary and European trade commissioner, told The Moscow Times on Saturday that the visit by Cameron and the first direct top-level British-Russian talks in Moscow since 2006 had, "opened the way to a positive change in political and government-to-government relations."

Contact between the Kremlin and Westminster had been soured by the 2006 London polonium poisoning of Alexander Litvinenko. Britain also refuses to extradite high-profile Russian businessmen that Moscow would like to prosecute, including former Kremlin kingmaker Boris Berezovsky.

But others were keen not to exaggerate the importance of Cameron's visit. Chairman of the Russo-British Chamber of Commerce Tim Eggar told The Moscow Times that the apparent resumption of political "air cover" would have a positive effect, particularly on skeptical British boardrooms.

"I have seen evidence of change at a very senior level in the perception of the risk of doing business," he said. "But I wouldn't go beyond that."