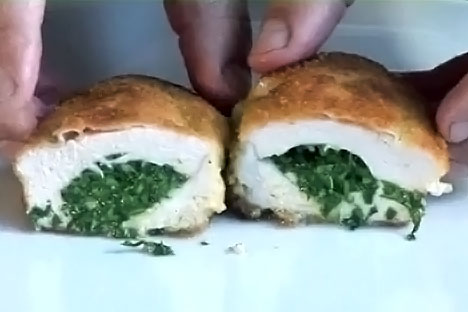 I consider myself a bit of a Chicken Kiev expert, having spent a number of years as a tour guide in The Former Soviet Union.

No matter where we went, our trips always ended up with a “Gala Farewell Dinner,” at a major hotel.  It was my job to insinuate myself into the good graces of the chef and somehow persuade him to put Chicken Kiev on the menu, because no American tourist was going to leave Russia without trying it at least once. Despite my dire warnings, at least one tourist in every group would cut into the breaded cutlet too vigorously and get a shower of greasy butter right on their last clean shirt.   Still, it was a must and I usually succeeded in getting the chef to agree, except, of course, in Kiev, where they flatly refused to oblige, leaving me back pedaling with my group: trying in vain to convince them that Chicken Kiev had nothing to do with traditional Ukrainian cuisine, whereas stuffed peppers on the other hand…

I was telling them the truth.  Chicken Kiev, like Beef Stroganoff, isn’t Russian at all:  it’s French and came into 18th Century Russia as “Poulet Supreme,” featuring a chicken breast stuffed with flavored butter and a crunchy breadcrumb crust invented by French chef Nicolas (Francois) Appert (1749-1841). Never a staple of pre-revolutionary Russian menus (it does not appear in the authoritative “A Gift To Young Housewives” by Elena Molokhovets’), it was the Americans who dubbed the dish “Kiev” in the 1950s, some say to bring it to the attention of Russian émigrés.  With the American mania for gadgets, Chicken Kiev was relegated to the deep fryer and gained popularity in the United States as a festive banquet dish, then a stock frozen entrée and ultimately deteriorated into synonym for one of the worst ways to prepare chicken imaginable.  Cutlets were prepared in advance, frozen, and then tossed into the fryer, resulting in rubbery meat, encased in a greasy, overly salty crust.

I was delighted, then, when the redoubtable “America’s Test Kitchen” set out to pull it back from the brink, and succeeded in returning some of the original French elegance and élan to the dish.  By baking, rather than deep-frying the stuffed breasts in toasted breadcrumbs, they have solved the problem of the excessively greasy outer coating and the overdone meat, creating instead a satisfyingly delicate crunchy coating that gives way to a moist chicken breast and the luxurious flavored butter inside.

The only problem left to solve is how to clean all those shirts!

- Mix the butter, shallot, herbs, lemon juice, salt, and pepper in a mixing bowl with a wooden spoon until thoroughly combined.  Form into a square and wrap tightly in plastic wrap and refrigerate for at least an hour.

- Process the bread cubes in a food processor fitted with a steel blade until they are fine crumbs.  Add salt and pepper and pulse a few more times.  Toss with vegetable oil to coat the crumbs.  Spread the crumbs on a baking sheet and place in the oven until they turn golden brown, and have dried completely (about 25-30 minutes).   Stir during baking to ensure the crumbs are baked evenly.  Set aside.

- Remove tenderloin, tendons, and smaller fatty deposits from the chicken breasts.  Slice the breast lengthwise from the thin side without slicing completely in half.  Open up the breast to create on flat cutlet with a seam down the middle.

- Cut the shaped butter into four rectangular pieces.  Place the cutlets, breast side up on the work surface and season with salt and pepper.  Place 1 piece of butter in the center of the bottom half of the cutlet.  Roll the bottom of the chicken, then fold the sides in, and continue to roll up the chicken so that the butter is completely enclosed in a tight roll.  Repeat with the other chicken breasts.  Refrigerate, uncovered, for about 1 hour so that the edges of the chicken seal.

- Adjust the oven rack to the middle position and pre-heat the oven to 350F/180C.  Set up flour, eggs, and breadcrumbs in separate pie dishes.  Season flour and bread crumbs with salt and pepper.  Add mustard to the eggs and whisk to combine.

- Dredge the chicken in the flour, and then coat it thoroughly in the egg mixture.  Shake off excess, and then roll the cutlet in the breadcrumbs, ensuring that each side, including the ends is covered completely.  Push gently to help the crumbs adhere to the cutlet.

- Place chicken cutlets on a wire rack over a baking sheet and cook for 45 minutes.  Let rest for 5 minutes before serving.

Chicken Kiev is traditionally served with rice or straw potatoes, which are handy for soaking up the delicious herb butter filling.  Other great accompaniments are fresh string beans, peas, and broccoli.

And be careful of your shirt!