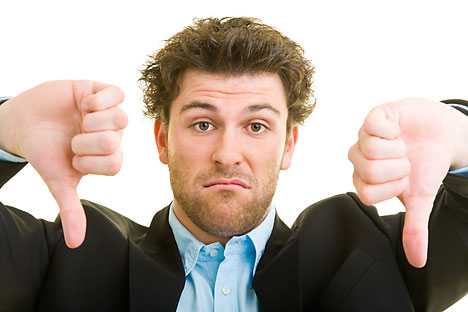 Russians are prone to complaining about all sorts of things: long winters, roads, government and police, writes Svetlana Kolchik.But there is a culture where people prefer to look at their misfortunes as a part of their karma. It is India.

“So how have you been, Svet?” A good friend of mine inquired the other day when we met for dinner. “M-mm, quite good,” I replied, after a few seconds of hesitation. “Na-a, don’t believe you,” He smiled.

A much more expected Russian response to “How are you doing?” would be uttering something neutral-negative like “so-so” or “bearable, thanks,” or “all right, but...” followed by a series of explanations to why life’s actually going not the way it should.

More often, one, myself included, would go directly to a series of complaints, something along the lines of “Oh, look at this traffic (weather, economic crisis, health issues), how on earth could I be okay?”

Russians are versatile complainers. We are permanently unhappy about our long winters and short summers, our roads, our government, our police, our own countrymen, our food, ourselves and our close ones, and what not. We complain with passion, almost taking pride in doing so. As if having been born in Russia had granted us with an unalienable right to grumble about everything, including the things we cannot change.

We like to label Americans who’d always give you an unquestionable “Great!” to a “How are you today” robot-like and fake. Trying to take it easy, even with strangers, just seems shallow and inauthentic.

Perhaps it’s simply part of human nature to lament on a regular basis. The state of discontent seems to be essential to being alive in the Western world. The more we have, the more dissatisfied we tend to be. My Parisian acquaintance, a successful businesswoman, married to a no less well-off guy, has had three babies one after another, and managed not only to keep her job in the midst of the economic crisis but to get a raise in position and salary. Still, she constantly whines. At the moment, for instance, she’s mad because her employer has removed a company car from her package (this woman and her husband already have three cars of their own).

Italians complain artfully as well. Southern Italians chronically nag about the Northerners and vice versa, and all Italians like to make a fuss about everything: from improperly cooked pasta to the general lo stato decadente delle cose or “decaying state of things.”

But there are places where complaining isn’t necessarily part of the daily routine. I’m writing this column from a remote Northern India locale, at the Himalayan foothills overlooking the Ganges River. I’ve been here on assignment for about a week now and I have not met a single complainer so far, not even tiny impoverished villages.

“The moment one says ‘this should or shouldn’t be that way,’ one risks getting unhappy,” a local guru told me (ashrams, or spiritual centers of sorts, with practicing yogi masters, are abundant in this area). In fact, I haven’t met any unhappy people here, even in circumstances where I thought they should have been discontent at the very least. It seems that accepting things, at least the inevitable, is a basic belief here, as well as being responsible for one’s thoughts, words and actions.

They call it karma here, but I’d call it simple wisdom.

“Every time you want to complain, try to see the larger picture and look not at those who are above you, but at those who are below. And then you realize that you should only be grateful,” another yogi master I talked to mused.

Sounds fair to me. Just as the old proverb goes: “I complained about having no shoes until I saw a man who had no feet.”