Tango dances its way into Russia 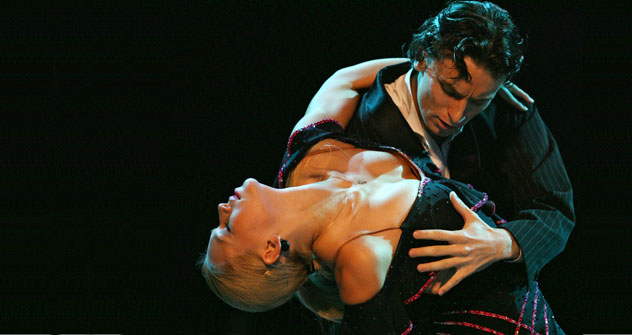 Tango has found an enormous popularity in Russia for the last decade. Source: AFP

Every night, thousands of Russian office workers dance the Tango. This dance is exploding in popularity, and enthusiasts arrange festivals and open clubs, where hundreds of beginners come every day to practice. Some want to move beautifully on the dance floor, while others secretly wish to change their lives.

Every night, thousands of Russian office workers dance the Tango. This dance is exploding in popularity, and enthusiasts arrange festivals and open clubs, where hundreds of beginners come every day to practice. Some want to move beautifully on the dance floor, while others secretly wish to change their lives.

Five years ago, Gennady Gabrielian was an office worker, too. He ran his own travel agency. Like millions of his colleagues, he divided up his time in a very banal way – between home and work. He believes that, deep down in their hearts, all city dwellers dream of finding a third place besides home and office, a place to go not out of obligation, but to satisfy their hearts.

Gabrielian was lucky: He came across a CD of the music of Astor Piazzolla, a famous Argentinean musician and composer, the author of hundreds of Tango melodies. During the golden age of the Tango, the period between 1935 and 1955, orchestras around the world performed at least 15,000 versions of this dance. Of that number, about 4,000 have been preserved.

“This music changes your soul,” Gabrielian said. This change is so profound that you cannot just sit and listen – you have to start dancing. You have to train first, though. There are now at least 20 Tango schools in Moscow. Gennady believes that this is a lot. Between five and eight schools stand out; it all depends on the teacher. For example, Gennady has attended three different schools. He believes students should change schools from time to time – it helps you develop as a dancer.

This is the third Tango boom in Russia. The first one was in the early 20th century. At that time, the fashionable dance was opposed by the education minister, who banned even mentions of the dance in educational establishments “because of its clearly indecent nature.” The Argentine Ambassador to France also called Tango “anti-Argentine” and even “undermining,” although it did not stop the dance from becoming a symbol of that country.

In the 1920s and 1930s, Russia, this time under Soviet rule, again fell in love with the Tango. Although officials within the Culture Ministry tried to ban the dance as a symbol of a bourgeois lifestyle, they did not manage to contain its spread. Moreover, it was during this time that Soviet composers created their own magnificent works, which became classic examples of the Russian Tango, including “Bryzgi Shampanskogo” (“Splashes Of Champagne”) and “Schastye Moyo” (“My Happiness”).

From the late 1940s to the mid-1990s, hardly anyone cared about the Tango in Russia except for professional dancers, but now we are witnessing a true dancing boom. Special Internet forums are dedicated to discussing dance schools in Irkutsk, Yekaterinburg and Samara. Five years ago, when Gennady started dancing, there were two thematic dance parties a week in Moscow. Now there are daily parties. Every year, three or four festivals are organized.

In late October, the seventh PLANETANGO festival was held in Moscow. Five couples of Tango maestros from Argentina came to Moscow to give master classes. According to the organizers, about 300 Tango students participated.

A more popular festival, Milonguero’s Nights, which is held in August, gathered thousands of dancers this year. Participants came not only from all over Russia, but also from abroad.

Anastasia, a manager at a Tango school, says that people ranging in age from 20 to 60 come to her studio to learn dancing. There used to be more women among the students, but the ratio of women to men is gradually evening out. Some men are brought by their girlfriends and wives, and some, like Gennady, start dancing by themselves.

“One of our students saw a milonga – a Tango dancing party – in a café. He became interested and came to us to take lessons,” said Anastasia. The lessons proved to be life-changing: the novice dancer met a girl and they are getting married soon.

As for my friend Gennady, his life has also changed completely due to his hobby. He sold his business one year after he started taking tango lessons and devoted himself entirely to his new passion, which first brought him to Buenos Aires and then led him to write a book: “Tango Argentino / A Guide for a Beginner Tanguero.” The book is the first Russian-language volume for a beginning dancer who dreams of becoming a part of this beautiful and mysterious world.

The romance with the Tango may prove thrilling and, above all, unpredictable.