What accounts for an increasing number of Internet users in Russia? 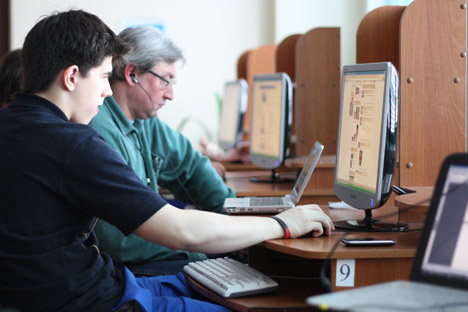 The increasing number of Internet users in Russia results from the country's bigger population. Source: PhotoXPress

Russia has become Europe's biggest market by number of Internet users, overtaking the region's leading economies Germany and France — an encouraging milestone for the biggest market players, but largely seen as natural due to the size of the country's population.

Russia topped a ranking of the 18 European countries with the largest number of Internet users, with the figure reaching 50.8 million in September, according to a survey by market research company ComScore. Germany, the displaced leader, sank to second place with 50.1 million Internet users, while the figures in France and Britain reached 42.3 million and 37.2 million, respectively, said the survey, published earlier this week. Italy was in fifth place with 23.7 million users.

ComScore surveyed Internet users over 15 years old who have access from home and work. Russia's leadership results from the country's bigger population compared with other European countries, said Konstantin Chernyshyov, an analyst at UralSib Capital.

"Internet penetration in the country is increasing. … It's natural that the number of Internet users is growing," he said by telephone, adding that Russia will preserve its leading position in the future.

Communications and Press Minister Igor Shchyogolev said in October that he expected the country's Internet market to become the biggest in Europe in the next several years if it continues its current growth rates. The overall number of Internet users in Russia is expected to reach half of the country's 142.9 million population by the end of this year, the Communications and Press Ministry said in e-mailed comments, citing "experts' estimates." According to ComScore, the average Internet user in Russia spent 22.4 hours online in September, below Europe's average of 26.4 hours. Social network Vkontakte.ru was the most popular web site among Russians, ComScore said.

The biggest domestic Internet companies were encouraged by ComScore figures, saying that hitting the biggest number of Internet users in Europe is a positive sign for the future development of the country's Internet market. Russia's leadership is important for domestic Internet companies working outside the country because it will strengthen business ties with their foreign partners, said Andrei Sebrant, marketing director at Yandex. "It's not only the county's potential but its current status that often matters for [partners]," he said in e-mailed comments. Yandex raised $1.4 billion in an initial public offering on NASDAQ in May.

Overtaking other European countries by the number of Internet users is a "milestone" for Russia, but the country still lags behind its European peers by penetration, said London-listed Mail.Ru. "The penetration is close to maximum in Moscow, St. Petersburg and other cities with a million population, but some of the country's regions almost don't have Internet connections," Mail.Ru said in e-mailed comments. The share of households across Russia that have broadband access reached 35 percent last year and is likely to grow 10 percent to 15 percent a year over the next couple of years, said Alexander Kazbegi, an analyst at Renaissance Capital. Regions that still don't boast good penetration are likely to be the biggest contributors to this growth because development of loan financing might result in people buying more computers and laptops, he told The Moscow Times.