Are we trying to lose Russia again? 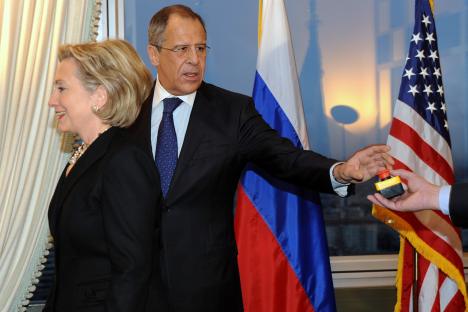 It remains to be seen how the criticism from Republicans and some American media will affect the achievements of the Russian-American reset. Source: AP

Between the activities of the Republicans and writing in the American press, it seems that the U.S. has given up on the reset – but is that really the case?

Russia is back in the focus of the U.S. media.  Needless to say, the coverage is mostly negative, since, as we all know, only “bad” news about Russia can spark excitement in American media circles.

The burst of interest in all things Russian was triggered by the recent announcement that Prime Minister Vladimir Putin was returning to the Kremlin next spring.  An op-ed in the “Los Angeles Times” – under the screaming headline “Watch out for Putin” – promptly suggested that Russia was headed “for a dead end.”  Sensing the opportune moment, Kathy Lally of the “Washington Post” dutifully manufactured a new episode for the endless series “Russia clamps down on opposition.”  Her latest piece described how Russian politicians are using “dirty tricks” ahead of the State Duma elections – apparently on the assumption that this practice is unique for Russia.

Then, in a brilliant display of black humor, on Halloween, the FBI released videos related to its undercover surveillance “Operation Ghost Stories.” When compared to the high-definition TV horror one could watch on Halloween, the FBI production looks particularly bleak.  Most of the videos are filled with colorless, ghostly looking silhouettes endlessly traveling long underpasses and tirelessly exchanging brown-paper shopping bags.  As if suspecting that the public would have hard time remembering what “Operation Ghost Stories” was all about, the producer included one more piece of counterintelligence art, the one allegedly featuring the infamous Anna Chapman.  In this video, staged in a coffee shop in New York, Chapman – who, due to the poor quality of the recording, doesn’t even look redheaded, meets with an “undercover agent.”

And just to remind us that Russian spying in the U.S. is alive and well – even with Ms. Chapman back in Moscow – the Office of the National Counterintelligence Executive told Congress that Russia’s cyber-economic espionage represents a growing threat to U.S. national interests.

Not spooked yet?  Then read about the latest report by the International Atomic Energy Agency claiming that foreign scientists had helped Iran develop technology necessary to build nuclear weapons.  And who these “foreign scientists” were?  Duh!  The Post identified one Vyacheslav Danilenko, “a former Soviet nuclear scientist,” as the major culprit.  For the record: Mr. Danilenko strongly denied the accusation of being “father of the Iranian nuclear bomb.”

Given the circumstances, how could American pundits and politicians stay away from the fray? Thus, on Oct. 25, the Heritage Foundation hosted a day-long event under the banner “The Risks of the Reset.”  One could easily dismiss the Heritage happening as yet another anti-Russian camp meeting if not for the fact that it was blessed with the appearance of Speaker of the U.S. House of Representatives John Boehner (Republican-Ohio).

It’s quite remarkable that in the middle of contentious bi-partisan negotiations on spending cuts, Speaker Boehner could find time for attending a mundane expert gathering at a think tank.  It’s also puzzling that he – as someone not known for interest in foreign policy issues, including U.S.-Russia relations – would give a speech that stopped short of calling for a new Cold War with Russia.  On the other hand, if castigating the Obama administration’s “reset” policy was indeed Boehner’s objective, his choice of the Heritage event was very appropriate: one of the foundation’s own experts on Russia has recently called the “reset” a “Cold War restart.”

A trivial explanation of the criticism of the Obama administration’s Russia policy would be that with the 2012 presidential and congressional elections in mind, the Republicans are trying to deprive the president of one of his most obvious foreign policy successes.  From this point of view, Boehner’s escapades against the “reset” could be viewed as simply a mandatory contribution to the election-campaign Obama bashing.  Not surprisingly, Mitt Romney, the leading Republican presidential candidate, has, too, made the “reset” the primary target of his attacks at the administration foreign policy.  In a recent interview, Romney insisted that “[the ‘reset’] has to end.”

But perhaps, Boehner’s speech at The Heritage served yet another purpose.  The speaker argued that the Obama administration should link its approval for Russia’s admission in the WTO to a border dispute between Russia and Georgia stemming from the 2008 military conflict between the two countries.  Here is what he said precisely:

“The administration should resolve this stalemate in a manner that respects the territorial integrity of Georgia.  Then – and only then – will movement on the WTO question be worth considering.”

This is a strange statement.  Boehner was certainly aware at the time of his speech that the U.S. had already acquiesced to Russia’s WTO entry – and that in the United States such decisions are made by the president, not Congress.  What is a congressional responsibility, though, is to graduate Russia from the notorious Jackson-Vanik amendment, a Cold War era anachronism depriving Russia of normal trade relations with the U.S.  However, once Russia is in the WTO – and now, this looks imminent – the burden will be on Congress to repeal the amendment; otherwise, the lack of normal trade relation status with Russia will hurt U.S. companies.  And here Boehner’s problem lies: he seems to be incapable of overcoming strong opposition in Congress – headed by Chairman of the House Committee on Foreign Affairs Ileana Ros-Lehtinen – to the amendment’s repeal.  By simultaneously attacking Russia and Obama’s “reset” policy, Boehner is creating an “ideological” basis to justify Congress’ unwillingness to defend vital U.S. economic interests.

So far, the Obama administration has refused to apologize for its Russia policy.  During his recent meeting with Russian President Dmitry Medvedev in Honolulu, Obama hailed the successes of the “reset.”  Also, by creating a State Department secret list of Russian officials whose entry in the U.S. is banned, the administration has essentially neutralized the so-called Cardin bill, whose negative effects on U.S.-Russia relations, if adopted by the Senate, would be hard to underestimate.  Yet, responding to the frequent criticism that the benefits of the “reset” came at a price of Russia’s deteriorating human rights situation, the White House has indicated that it’s shifting the focus of its Russia policy on human rights issues.

This latest twist is not without peril.  Obama must know that nothing can poison the Washington-Moscow dialogue faster than his attempt to lecture the Russian president, whoever he is, on human rights.  It’s the Republicans who, at the moment, have nothing to lose from “losing Russia.”  In contrast, Obama needs Russia to advance America’s national interests.  Especially, if he succeeds in becoming a two-term president.