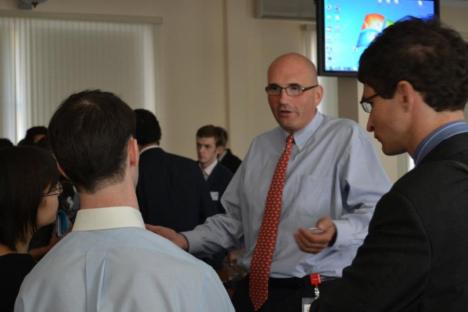 Bernard Sucher, the member of the Board of Directors at Aton Group, is talking with students as a guest speaker at the 2011 Stanford U.S.-Russia Forum in Moscow. Source: Pavel Koshkin

Bernard Sucher, a member of the Board of Directors at Aton Group, talked to RBTH about the challenges and the benefits of working in finances in Russia.

Entrepreneur and banker Bernard Sucher is very familiar with the Russian business environment. In 1983, Sucher graduated from the University of Michigan with a degree in Business Administration with a concentration in Russian and Soviet Studies. Since then, he has worked in the Russian operations of many prominent banks, including Bank of American-Merrill Lynch, Troika Dialog, Alfa Capital and Goldman Sachs. Today, as a member of the Board of Directors at Aton Group, he works on strategy for Russia’s last significant independent investment bank, focusing on client acquisition, new business development, corporate culture and mentoring. He recently spoke to Russia Beyond the Headlines’ Pavel Koshkin about his career and the experience of doing business in Russia.

Russia Beyond the Headlines: You studied Business Administration and focused on Russia and Soviet Studies. Why did you choose this field?

1983 - University of Michigan, Business Administration with an additional concentration in Russian and Soviet Studies.

2011 - Aton Group, Member of the Board of Directors

Bernard Sucher: It goes back to 1978. The Soviet Union and the U.S. were hotly engaged in the Cold War and I wanted to know my enemy. Now, thankfully, it’s totally different. Modern Russia and Moscow, particularly, have significantly changed since that time. To me, it’s a kind of miracle. The world has become flat and one of the happy consequences is that there are many opportunities to do good work in Russia.

RBTH: You have rich business experience in Russia. What difficulties did you face in the beginning of your business career in Russia?

B. S.: I can speak about Moscow in the early 90’s, specifically, about trying to start businesses within the Garden Ring. What were the obstacles? For starters, everything was new, untested, untried. If there were a hundred factors to consider in a given situation, maybe five of them could be estimated with any confidence. Whether it concerned politics, or business or society – anything – you couldn’t escape a profound feeling of
uncertainty. These days, people label that “chaos,” but it was more like every couple of days, something really wacky happened somewhere. That just reminded you that whatever you were putting at risk, all of it really could be lost. And I am not just talking about money. As a result, everyone’s planning horizon was shortened to months, even days. That might be a great thing if you are on a first date, but try building a business with contractors and employees who won’t trust you for anything for even a week! For all these challenges, there was an overwhelming, compensating reality – if you could get your business started, you had little or no competition at all. Can you imagine such a thing as opening a restaurant in a city of more than 10 million people, and knowing that you had not more than six real competitors?! When you see that picture for what it is, man, you take the risks!

B.S.: Definitely Russia’s membership in the WTO will contribute to building a more favorable investment climate. I don’t want to overstate the immediate impact, but if nothing else, Russia’s WTO accession “normalizes” its economic relations with the rest of the world. Just consider how odd the status quo has been -- the planet’s largest territory, with a GDP of nearly $2 trillion, has been operating outside a global trading system which has been embraced by over 150 states. That we are putting this weirdness behind us is a powerful signal to people that Russia is willing to live by the same rules as everyone else. Moreover, since the rule of law and institutions generally in Russia are so weak, the fact that Russia will now be bound to external standards and dispute resolution mechanisms is potentially a huge step forward for governance within the country.

RBTH: Basically, you deal with bank activity and know a lot about the Russian banking system. What major problems Russian banks are faced with from your point of view?

Aton Group is the oldest independent financial group in Russia representing a wide range of products and services to private, corporate, institutional and international investors in the area of investment in Russian economy since 1991. It holds an AAA rating from the National Rating Agency. Aton provides training courses on investing in the stock market. In 2009 alone, more than 3,200 clients attended Aton courses, including our Stock Market Master Class.

B.S.: You know, almost everyone emphasizes the positive in Russia’s banking picture. Admittedly, given the grotesque failures of leading banks in America and Europe, this is understandable. However, I still find myself wondering about recent episodes that cost Russian taxpayers astonishing amounts of money, and for which there not only seem to be no answers offered, but no questions asked. Why exactly did the state feel it necessary to save KIT? How was the money lost and who specifically benefited from the bailout? You can ask the same questions of Svyaz or Globex. Maybe some of my peers in the industry know the answers, but in these multi-billion questions, I’ll confess my ignorance. And while one might dismiss these examples from 2008 as ancient history, the Bank of Moscow saga is bigger than any of them, and it is a current event. Anyone with a nose and vocal chords should candidly tell you, “Something stinks.”