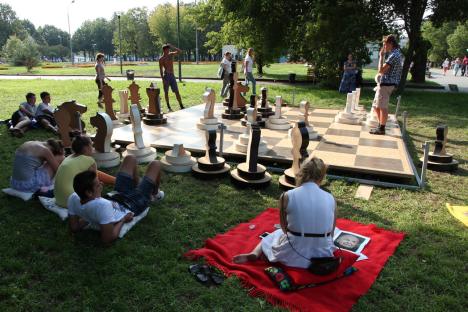 Will Moscow Mayor Sergei Sobyanin’s plan to redevelop the city’s green zones transform Moscow from a city of concrete into a city of gardens?

After the collapse of the Soviet Union, Moscow’s parks began dying a slow death. They were taken over by desolation, dubious food stands and stray dogs. “We live near Sokolniki Park,” said 47-year-old Muscovite Vladimir Antonov. “We used to go there on Sundays. The park was a sorry sight: dingy, dirty children’s playgrounds, an empty lot that passed for a soccer pitch, and not a single reasonable public toilet.”

For many years, the question of what a city park should be like remained unanswered. Today, however, there is an ideology. It that boils down to this: A park should offer leisure facilities to suit every taste and every income. Modern city dwellers spend their leisure time in one of three ways: playing sports or being active; going to the theater, the movies or some other kind of entertainment; or just resting. The new parks are supposed to offer activities that cover all these preferences.

“People used to come to the parks mainly to walk, sit on a bench and chat. Now we want to build sports facilities in several parks to enable the visitors to do something healthy,” said Alexander Minin, deputy head of the ecology research and production unit at the Moscow Master Plan Institute.

“Neighborhood sports fields have been largely abandoned,” said Yevgeny Lysenko,39. “School stadiums are fenced off, and going to a run-of-the-mill fitness club sets you back at least 15,000 rubles ($500) a year. I live near Tsaritsyno Park. There used to be pull-up bars and volleyball pitches there, but after reconstruction under Mayor Luzhkov, all these disappeared and the only thing you can do there is jog.” When some active Muscovites built a field in Vorontsovsky Park with their own money, the place was declared illegal and the facilities torn down.

The Gorky park redevopment is in full swing. By early December, it will have a 15,000-square-meter ice skating rink, the largest in Moscow and one of the largest in Europe. Source:  © Dmitry Zh/Ridus.ru

But now things appear to be changing. The massive redevelopment that has been going on at Sokolniki Park since July is obviously focused on sports. Gorky Park, too, is actively developing its sports facilities. There are already areas for cycling and skateboarding, and by early December, Gorky Park will have a 15,000-square-meter ice skating rink, the largest in Moscow and one of the largest in Europe. It will be divided into sections for different activities, such as ice hockey and children’s lessons. A cross-country ski track is also in the works.

Another plan is to create areas for casual strolling, but to create a place for a truly pleasurable promenade, three challenges need to be met. The main one is to remove litter from the parks. Once this has been completed, the next task is to invest in landscaping.

“One has to bear in mind the sad experience of Tsaritsyno, where many trees and shrubs in a remote part of the park have been cut down,” said Alexander Rappoport, deputy director of the Moscow University Botanical Gardens. “Of course, landscape design must be improved, but this doesn’t mean there should be nothing but lawns. There are many nooks in Moscow that have unique landscape and ecosystems. They should be preserved. Everything is good in moderation.”

Landscape architects will have to be mindful of many different things. For example, there are not enough places in Moscow that are appealing to the eye. This is particularly true of densely built-up residential areas consisting of nothing but dreary apartment blocks. “We‘ll have a chance to improve the aesthetic look of the city due to parks,” said Oleg Shapiro, a member of the board of trustees of the Strelka Institute of Mass Media, Architecture and Design.

The third task, according to experts, is to create “areas of quiet” in the parks. “Moscow is very noisy anyway, and one of the key functions of a park in such a huge city should be to preserve the silence,” said Shapiro. “That is why I think that, in designing the reconstruction of green zones, one should not overdo amusements. They should not occupy too much space in the park.”

A place for noise

There may be many Muscovites who want a clean, green place to rest, but when the old carnival rides were removed from Gorky Park in April, many people were unhappy. According to the authorities, there will be a place for amusements in the remodeled parks. There will be both indoor and outdoor activities unique to each park. For example, there is a plan for an area in Sokolniki Park consisting of 250 of Moscow’s architectural landmarks in miniature. The estimated cost of the project is $60 million.

“In developing reconstruction projects, we take into account the character of our parks”, says Alexander Minin. “But they will certainly not be copies of Western parks. We tend to look at Western experience forgetting our national character. Reconstruction of parks is an excellent opportunity to restore and create new landmarks in Moscow that would attract both local residents and visitors.”

How the drive to give a new look to Moscow’s parks will pan out is still anybody’s guess. So far, the capital’s budget has earmarked 120 billion rubles for development of the recreation and tourist industry in Moscow’s parks. Private investors will also be invited to contribute. The number of people visiting parks is expected to double within five years from 15 to 30 million a year. About the same number visit New York’s Central Park.

First published in Russian in the Itogi Magazine.