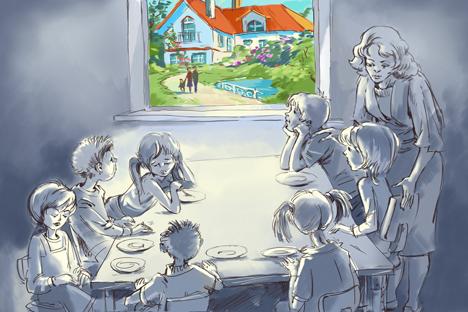 Russia views the latest U.S. court sentence handed down to an American couple guilty of killing their adopted Russian son as too light. Will it affect the progress that the United States and Russia have made on regulating international adoptions?

A U.S. court in York, Pennsylvania has sentenced an American couple to 16 months to four years in prison for the death of their 7-year-old adopted Russian son. Because the couple has already served 19 months, they will not spend any more time in jail. Michael and Nannette Craver were convicted of beating to death their son, Nathaniel, who was born Ivan Skorobogatov in Russia’s Chelyabinsk Region.

The court found the Cravers guilty of abuse and neglect, which resulted in the boy’s death. Russian authorities, however, believe the couple intentionally killed Skorobogatov, and see the prison sentence as unjust. Some State Duma members have expressed indignation at the verdict, including Foreign Affairs Committee Chairman Konstantin Kosachev, who said in an interview with ITAR-TASS that the verdict was politically biased. Russia’s Investigative Committee suggested launching an international investigation.

The Skorobgatov case could complicate joint Russian-American initiatives on adoption, including the bilateral agreement signed by Russian Foreign Minister Sergei Lavrov and U.S. Secretary of States Hillary Clinton in July. The document, which attempts to regulate international adoptions, came in response to a series of deaths of Russian children at the hands of their American parents. The need for an agreement was brought to light again this spring by the notorious case of Artem Savelyev, who was sent back to Moscow by his American mother Torry Ann-Hansen with a note describing him as “severe” and “mentally unstable.”

The U.S Department of State has called the adoption agreement a good tool to provide procedural safeguards in adoptions between the two countries and better protect “the welfare and interests of children and all parties involved in inter-country adoptions.” But the agreement cannot enter into force until it is approved by Russia’s State Duma.

Although some experts, such as Russia’s Children’s Rights Ombudsman Pavel Astakhov, view the agreement as positive sign in resolving the problem, many Russians are still skeptical of international adoptions. These suspicions have come as result of a series of tragic incidents over the past 18 years, in which at least 17 Russian children were killed by their American families.

These incidents prompted some in the Russian establishment to call for a moratorium on international adoption, and although some media outlets reported that adoptions between the United States and Russia had indeed been suspended, that was never actually the case. According to Astakhov, such a ban would have required amending the Russian Family Code as well as some other complicated bureaucratic procedures, and so it was never done.