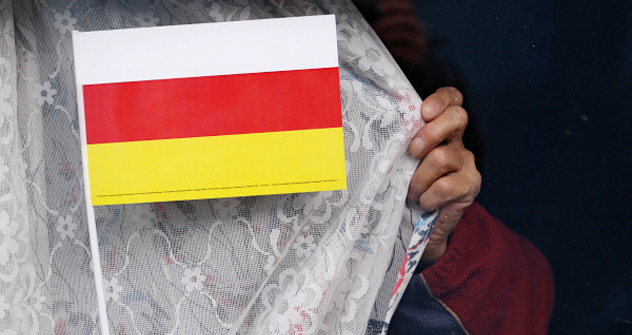 The upcoming presidential election in South Ossetia will test the level of democracy in the unrecognized republic. Source: RIA-Novosti

Voters in the unrecognized republic will go to the polls to elect a new president Nov. 27. The results of the first round already show developments in the young democracy.

Election campaigns in unrecognized republics often look very much like elections in UN member states: They involve candidates making promises and the attempt to win votes through the use of advertising and financial and administrative resources. But elections in unrecognized states are different in one important way: They are more than a contest between candidates – they also indicate the status of the “mother states” within the republics.

The 2011 elections are of special significance for South Ossetia. First, this is the first time a president has been elected since the republic declared independence from Georgia. No candidate won an outright victory in the first round of the elections. In the second round, on Nov. 27, ruling Unity party candidate Anatoly Bibilov will face opposition candidate Alla Dzhioyeva. Although the world’s major powers have not recognized the vote, the fact that the election was so hotly contested should serve as further proof of the development of democracy in the region.

Second, the 2011 election campaign is important for South Ossetia because in addition to a change in the presidency, the republic will see a change of the ruling elite. With this election, South Ossetia will achieve a peaceful transition of presidential power on a constitutional basis – something Georgia has never done. The republic’s incumbent president, Eduard Kokoity, is stepping down, regardless of the election’s outcome. Under the republic’s constitution, he cannot stay in power for more than two terms. He became president in 2001 – against the wishes of the Kremlin and the North Ossetian authorities – and during the 10 years that followed, Kokoity managed to become a symbol of loyalty to Moscow. He has achieved, if only partial, recognition of South Ossetia, by presiding over the “unfreezing” of the conflict with Georgia. During Kokoity’s presidency, the main issues facing the republic were its physical survival and preservation of its infrastructure. The challenges for the next president will be to improve governance and expand the number of countries that recognize it.

Let us not be idealistic about the elections in South Ossetia. There has been – and will be – much to invite criticism. Until August 2011, it was still unclear whether Kokoity would run for a third term. Although he had declared publicly in 2010 that he would not seek to extend his powers, Kokoity’s supporters, with his silent approval, tried to put constitutional and legal amendments through parliament that would allow him to run for a third term. When all these ideas failed, the authorities – and their Russian backers – threw their support behind Anatoly Bibilov. But he did not win an outright victory.

However flawed the South Ossetian elections might be, they were not a walkover for the party of power. Bibilov won the first round with a mere 25.44 percent of the vote and failed to win an outright victory. His main opposition rival, former education minister Alla Dzhioyeva, won 25.37 percent of the votes. This level of support indicates that she achieved something no other opposition leader has ever achieved before – she managed to consolidate the opposition vote. She was backed by Dzhambolat Tedeyev, a famous sportsman and the coach of the Russian freestyle wrestling international team and Anatoly Barankevich, ex-secretary of the Security Council and a hero of the Five-Day War.” Dzhioyeva does not have a serious program of her own; her appeal is based on her criticism of the authorities’ inefficiency. But her poll numbers indicate that however things develop, protest sentiments will have to be reckoned with. And this is the key preliminary result of the elections.

The contestants are bracing themselves for the final round. Anatoly Bibilov’s trump cards are administrative support and the potential of the “understudies” from the “party in power.” Alla Dzhioyeva hopes to win over votes from other opposition groups. But a lot will depend on Moscow’s stance. To date, Russian intervention in the campaign has been carefully calibrated and limited. Russia made it clear that it wanted to see a civilized transition of power and that it would support and respect the choice of the people of South Ossetia. It should be noted that, for all their internal political differences, the two candidates profess support for the Russian geopolitical choice. For all her fierce criticism of Eduard Kokoity and his team, Alla Dzhioyeva told Russian daily “Kommersant” that she was “Russian by passport and in spirit.”

Moscow, then, should behave in accordance with the principle “do no harm” and not repeat the mistakes it made in Abkhazia seven years ago. Not every opposition is anti-Russian and not all criticism of Moscow and its partners in Tskhinvali is aimed against Russian and South Ossetian interests. Russia, more than the West, needs to see democratization and greater openness in South Ossetia, because this is the best way to control how the money allocated to restore the republic’s infrastructure is spent, and how to prevent it being used for selfish ends. It should also be kept in mind that quality elections and a civilized transition of power constitute a potent argument in South Ossetia’s political rivalry with Georgia, which has failed to resolve the problem in the last 20 years.

Sergei Markedonov is a visiting research fellow at the Center for Strategic and International Studies in Washington, DC