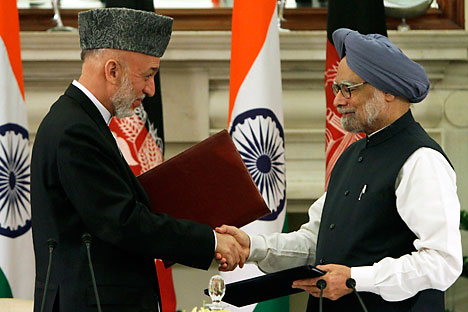 Prime Minister Vladimir Putin reportedly personally endorsing India’s role in Afghanistan. The new combined abilities and upgraded Special Forces will enable India and Russia to work to stabilize the region. Will other states in the region work to ensure regional harmony?

India is one of the countries that have been forced to make tactical and strategic decisions on Afghanistan, and New Delhi has been formulating a new approach, which was ratified during the visit to India of Afghan President Hamid Karzai in October. The assassination of former Afghan President Burhanuddin Rabbani in September crystallised this effort, says The Diplomat.

India’s strategic outlook has been spelled out in a treaty between the two countries, with a larger role planned for the Afghan National Army, which is to receive training and material support from the Indian armed forces. This comes as India’s defense posture in the Himalayas has been beefed up with the addition of mountain divisions stationed there on a permanent basis, with necessary air cover having been deployed.

Interestingly enough, Russia has concurred with this approach, with Prime Minister Vladimir Putin reportedly personally endorsing India’s role in Afghanistan. The latest modernization plan for the Russian armed forces reflects Putin’s thinking for his country until around 2025, and the new combined abilities and upgraded Special Forces will enable India and Russia to work to stabilize the region.

The question is whether China will join forces with India and Russia to assist in ensuring the stability of Central Asia? And will other states in the region work to ensure regional harmony?

Indian Prime Minister Manmohan Singh has in recent days sought to use soft power to focus the attention of South Asian countries on the importance of stabilizing he region. At the recent SAARC summit in the Maldives, for example, the need for the peaceful rise of participating members was outlined in detail, using multiple economic levers such as most favoured nation status.

As the premier of the leading economic power in South Asia, Singh clearly outlined India’s commitment to the economies of the region, but also clearly stated that terror as a tool of state policy must be abandoned. In addition, he suggested that non-state actors who have previously been nourished must be brought to justice. How will the weak civilian government of Pakistan and the Maoist-led government of Nepal reconcile these suggestions? Hopefully, the promise of local security, along with the hoped for benefits of a stronger economic partnership, will tempt them to stay the course.

Most countries in Asia – and China in particular – are warily watching the tidal forces unleashed by the Arab Spring, which have washed away dynasties, autocratic governments and military dictatorships. These countries are now shoring up their societies as they foresee civil discontent rising, particularly among their young people. This reality should make it all the clearer to nations in South and Central Asia that they have a vested interest in being responsible actors and cooperating in a peaceful manner.

Only by fostering trust among each other will they be able to slowly develop peace and security in fragile Afghanistan.

This article is first published at The Diplomat.