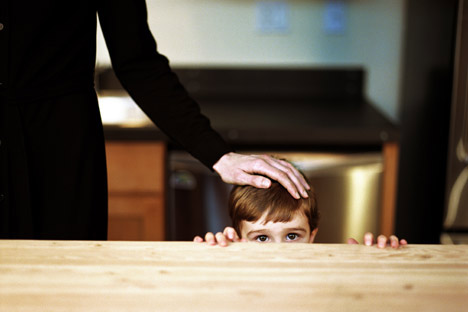 The problem of separating children from parents is still urgent in Russia. Source: Getty Images/Fotobank

In Russia, there is a widespread trend of separating children from parents, much more so than in other countries. The rights of troubled parents are signed away with relative ease. Their children are known as social orphans.

There are fewer children today than there were ten years ago because of a shrinking population generally. In 1998, there were 22 million schoolchildren in the country; in 2010, there were 12.8 million, a drop of 42 percent in 12 years.

Yet there are more than 100,000 new orphans in Russia every year (more than 300 a day).  About one quarter of these children are swelling the populations of orphanages while the rest are being placed in the care of close relatives.

In 2009, the permanent population of child-care institutions was more than 300,000. Almost 100,000 of them had no parents, while the rest had been voluntarily “surrendered” by their parents to the state because the children had health problems or because the family was poor or dysfunctional. The list of family problems includes drug addiction and alcoholism but is topped by poverty, which in Russia affects children above all.

The underlying cause of this “orphan factory” is the rudimentary state of the social services available to a family in distress. Hundreds of thousands of families with disabled children have the worst of it: nobody helps them, and there is no support. Rather, officials press them to put their child in a state-run boarding school.

Russia traditionally has gigantic boarding schools with hundreds of children. The country regularly reads shocking reports about children’s rights violations in these closed “child dumps.” Highly professional legislative and other initiatives based on the best Russian and world practices have been put forward many times and received support at the top political level in the country. Somehow, this help has not yet reached our children.

Another problem is segregation in the educational realm. Children with special educational needs (for reasons of poor health, poor knowledge of Russian) cannot cope with the basic curriculum, cannot study together with “normal” children and are likely to be transferred to special (correctional) classes and boarding schools. The final link in this chain of “educational isolation” is children’s homes for mentally handicapped children (DDIs), which are not educational institutions at all. The widespread practice is over-diagnosis of mental disability, which “buries alive” many children, who are simply excluded from the life.

Some cases have been reported of children with officially hopeless diagnoses being taken out of DDIs by families. After some time and with encouragement, they were perfectly able to study in an ordinary school with ordinary children.

In January 2010, Russian President Dmitry Medvedev approved the national education initiative “Our New School,” which puts an end to the above-mentioned traditional segregation in education. For more than a year now, the nation has been discussing the new draft law “On Education,” which is designed to implement the presidential initiative. The legislative process reached a stalemate, however, because educational conservatives have been against it.

The priority measures to solve these problems are obvious: the country desperately needs social housing and “a food economy for the poor,” involving the production of staple food items. Social services in Russia must be oriented toward helping families with children at their place of residence, if possible, without taking the child away from the parents. Yet so far, all attempts to implement the so-badly needed reforms inevitably run up against a wall of corruption and monopoly.

Boris Altshuler is the chairman of the board of the regional NGO Right of the Child and a member of the Civic Chamber of the Russian Federation.