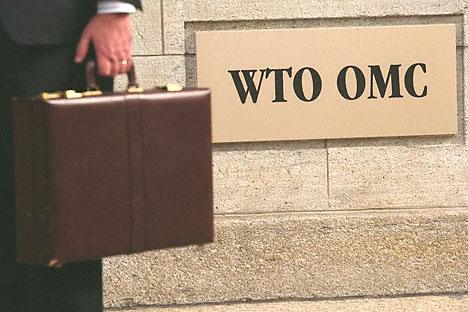 Does the Kremlin really want to join the WTO. Source: Corbis/Fotosa

The Russian leadership may no longer be excited about the WTO, but joining is the right thing to do.

The 18-year marathon seems to be over. Barring some extraordinary last-minute scandal, in mid-December the World Trade Organization will agree to accept Russia as member. Georgia was the last WTO member objecting to Moscow joining the free trade alliance; it was insisting on some form of Tbilisi-sanctioned customs controls on the borders between Russia and the republics of Abkhazia and South Ossetia.

The two regions broke away from Georgia in August 2008 as a result of the Five-Day War. Since that time, Moscow has recognized the republics as sovereign states, but most of the world considers them part of Georgia.

Barack Obama and the leaders of the European Union believe that WTO membership will, in the long term, open Russia up to the world and ease the difficulties that American and European businesses are experiencing there. As a result, Tbilisi was heavily leaned on by the EU to accept a Swiss-brokered compromise. There will be some nominal customs checks system in place on the Russian-Abkhaz and Russian-South Ossetian frontiers, which no one believes to be anything but a fig leaf, covering the de facto recognition of Russia's protectorate over the two breakaway republics.

So is it a political victory for the Kremlin? Yes. Is the Kremlin enthusiastic about WTO membership? Probably not. It would have been a disaster for Russia's reputation to refuse to join after nearly two decades of tough negotiations. And it would have left the country badly isolated from the world marketplace.

However, Vladimir Putin was always suspicious of WTO membership because it limits the Kremlin’s total control of the Russian economy. At the moment, the Kremlin can write its own rules for foreign investors and re-write them when needed, but the accession would introduce an independent framework of rules, regulations and dispute resolution schemes, which are difficult if not outright impossible to change or bypass. This would weaken the government’s hold on the economy. Mr. Putin is in no rush to see this happen as he prepares to assume the presidency once again. That is the reason for the prolonged transitional periods for some Russian industries. This is especially relevant for the energy industry, as Gazprom will be allowed to continue selling gas on the domestic market at reduced prices – one of the key elements of keeping social stability (and voting patterns) in favor of Putin’s team.

The relatively lenient terms on which Russia will join the WTO may disappoint some potential investors, but Moscow is convinced that their numbers will always be sufficient to keep the Russian economy going.

However, looking ahead a decade or so, Brussels and Washington may be right about the long-term benefits for foreign investors in Russia. And these investors will now have more ammunition to defend their positions in Russia and support Russian companies abroad. Many of them found it difficult to invest in Europe and America because of protectionist hurdles. Now they can appeal to the WTO rules, although I think that with state behemoths like Gazprom, a lot of suspicion would still linger as to their real intentions. But funny as it may seem, Russian businesses will also be able to take their own government to task – for example, if it tries to dictate their choice of foreign partners.

It will be a long and messy story, no doubt, but it is to the Russian government’s credit, that having spent so much time and effort trying to keep the country aloof and separate from the rest of the world, on WTO, it chose against its own instincts to tread a different path.

Konstantin von Eggert is a commentator and host for radio Kommersant FM, Russia’s first 24-hour news station. He was a diplomatic correspondent for Izvestia and later BBC Russian Service Moscow Bureau editor-in-chief. He was also once vice president of ExxonMobil Russia