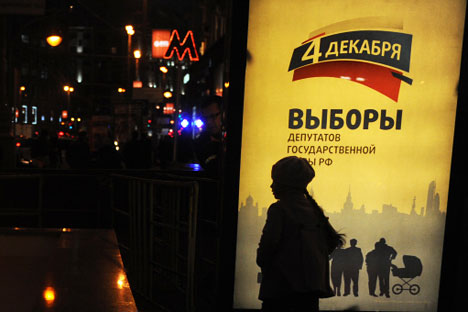 Russia's upcoming parliamentary elections have left only two questions unanswered: how many Russians will vote for United Russia and which parties will overcome the 7 percent threshold. Source: RIA-Novosti

The only questions remaining in the Dec. 4 Duma elections are the percentage of the vote the United Russia party will win and which parties will pass the 7 percent threshold to enter the parliament, but the answers to these questions really won't change much.

Russia will be electing a new State Duma in only a few days, but few Europeans are interested in the vote, if they are even aware of it at all. Struggling with the eurozone crisis and focused on domestic affairs, people are not interested in foreign politics. If an average European was asked when the next Russian elections will be, the best hope would be for a reply approximating next March's presidential elections. But for Russians, the upcoming elections will be far more interesting, because they actually involve some uncertainties.

The first is how many parties will win enough votes to pass the 7 percent threshold to get into the Duma. Three parties – United Russia, the Communist Party (KPRF) and the Liberal Democratic party (LDPR) are certain to win seats, but the fate of the fourth party currently represented in the Duma – Just Russia – remains uncertain. After its leader, former Federation Council Speaker Sergei Mironov left office, this party lost administrative resources and appeal. And while the other three parties currently in the Duma have fairly clear ideological positions, Just Russia never quite managed to clarify what it should be. At one point, its members wanted it to be a strong opposition, but either they were unable to create such opposition or feared that they would lose votes by doing so, and so the party remains without a clear identity. This summer's rising star among Russian parties, Right Cause, faded out almost as quickly as it began to sparkle when billionaire Mikhail Prokhorov left the project. Two other parties, Yabloko and the Patriots of Russia, which are both liberal, also have little chance of entering the Duma.

The other uncertainty hovering over the elections is whether United Russia, the party of the Putin-Medvedev tandem, will have a majority in the Duma. Last year, the party’s approval rating dropped below 50 percent, and, according to several surveys, it is wavering around the same figure at the moment. The Levada Center suggests an even lower figure of 45 percent. The party of power is losing support among retired workers and members of the armed forces, but is remains the favorite of women. According to the “Public Opinion” Foundation (FOM), 64 percent of United Russia supporter are women. According to FOM President Alexander Oslon, this is because women possess a strong “motivation to support the powers that be.» For women it is important to “preserve stability,” while men are, on the contrary, more inclined towards “risk and change.” According to FOM, support for United Russia is also growing among young people. Sociologist Sergei Belanovsky thinks the reason is very simple, “Young people, especially girls, know only Vladimir Putin and United Russia.” Or maybe they follow the social networking exploits of President Dmitry Medvedev. United Russia hopes to win 60 percent of the votes, or at least half of them. It is a reasonable wish, but rare for Europe: It has been years since a single party won half the electoral votes without resorting to coalitions in any European country.

All Russia's political parties have very broad, almost unimaginable programs. There are problems with housing – the parties will solve them. Yabloko suggests giving everybody land to build a house and that oil and gas profits should be used to build infrastructure, including roads, to give people free utlities and to pay 2/3 of housing costs. The LDPR wants to give voters all these things, plus a 1 million ruble credit. After these promises, United Russia’s goal of doubling house building and lowering mortgage interest rates to 6.5 percent (down from the current 10 percent) seems modest. Everyone promises to raise salaries, even by up to 50 percent, or to put 60 percent of GDP into salaries. If we add up the costs of all the promises made by the seven Russian parties, we would not reach the value of the Italian debt, but we would easily outstrip that of Greece. But Russian voters believe in promises – 4 percent think everything will be done, 69 percent, at least part of it. And they are all sure their lives will get better.