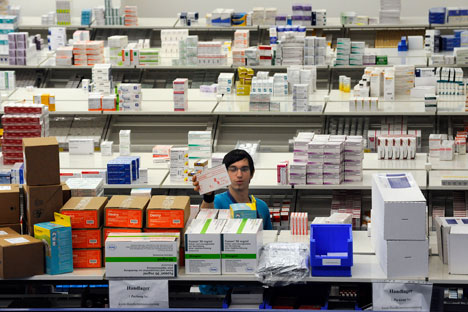 BRIC combined pharmaceutical market is a force to be considered. Its turnover equals that of the USA - $132.2 bln. The four countries appear to go through the economic recession with a lesser damage than many other economies. Yet each of them has issues to resolve for the next five years.

The main advantage as well as challenge for the BRIC countries is their rapidly increasing urban population. On the one hand, it’s relatively wealthy and has a much greater spending power than their respective national average. On the other hand, there is still a considerable gap between the well-to-do urban citizens and the rest of the population. At the moment one of the principal targets for the BRIC is making healthcare affordable for a larger percentage of the population.

BRIC countries’ pharmaceutical markets are often compared to the established pharma markets of North America, Japan and Europe. The current situation in the pharma industry may be subject to changes because there still exists commercial difference between North America, Japan and Europe and emerging BRIC markets, but this difference is being eroded thanks to the high economic growth of the latter ones.

Meanwhile, despite common tendencies for the BRIC markets’ such as buoyant economic growth for the nearest future, a few characteristics specific for each separately taken market can be singled out.

For instance, Brazil’s pharmaceutical market’s overall outlook for the 2011-2016 period is fairly optimistic. The country ranks the first among Latin American markets and is the third largest in the Americas region after the USA and Canada. The pharmaceutical demand is forecast to go on rising boosted by the growth of disposable income. The competition between five leading pharmacy chains remains fierce, although it was somewhat attenuated by several recent mergers – between the state of Sao Paulo leader “Drogaria Sao Paulo” and “Drogarias Pacheco”, the biggest company in Rio de Janeiro in September 2011, following the merger between the companies Drogasil and Droga Raia, announced in August 2011.

The distinguishing trait of the Russian pharmaceutical market is an increasing presence of foreign manufacturers. There were a number of agreements drawn in 2011 to benefit the pharma market of the country. These include a joint-venture between Russian OJSC Diod and Indian company Aurobindo Pharma, investment by Russian government investment company Rusnano in the Cleveland BioLabs’ new subsidiary, Panacela Labs and other arrangements between domestic and foreign companies.

In contrast to the Russian pharmaceutical market, Indian pharma industry is a highly competitive field. The domestic production of low cost generics is predominant in the market. However, despite prolific domestic drug production and an increase in the middle-class citizens having high healthcare expectations, India accounts for less than 2% of the world pharmaceutical market in value terms. It means that notwithstanding the good performance of the Indian economy, spending on pharmaceuticals amounts to 1% of GDP. The main tendencies in India are continued growth in the biopharmaceutical sector and progress in the diagnostic and therapeutic segments.

As to China, one of the top priorities of the Ministry of Health (MoH) is lowering the drug prices to make them available for everyone. Two rounds of price reductions for the drugs already took place in 2011. Also the MoH has recently come up with an initiative of securing cheaper medicines for HIV/AIDS patients, as part of the country's universal health coverage programme. China intends to prepare the basis for universal healthcare access for everybody by 2020.