A message in the music 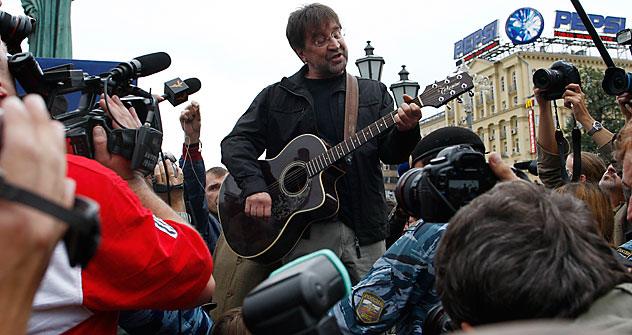 Russian rock stars such as Yuri Shevchuk have traditionally relied more on allegory and metaphor in expressing their ideas and political positions. Source: ITAR-TASS

Although Russian artists have often taken on the establishment in metaphors, this year they are making their lyrics more explicit.

What do corrupt cops and civil servants, the shenanigans of those in power; sycophantic bureaucrats; the hypocrisy and crimes of top officials and oligarchs; ethnic strife; and the meekness and inertia of the common man all have in common? They have provided material for Russia’s rock legends, rappers and independent songwriters ahead of the Dec. 4 State Duma elections.

Perhaps one of the most notable election ditties is veteran Russian rocker Andrei Makarevich’s ballad about an imaginary place called “Kholuyovo.” The name of the town is derived from the Russian word “kholuy,” which translates roughly as “sycophant,” or “toady.” The people of Kholuyovo are preparing for a visit from Vladimir Putin: “They painted the grass green and the sky blue.” But Putin never comes to Kholuyovo, so all their preparations are in vain. The song became an Internet sensation in Russia in October, soon after Putin and President Dmitry Medvedev announced that they would swap positions.

“I don’t like what is happening today. We’ve already been told who our president will be. It’s not about Putin, but the sense that we are being deprived of what little choice we have. That’s all,” Makarevich said. He insists that the song is not about Putin, but “about the sycophantic attitude toward the authorities that prevails in the Russian provinces.”

Although Russian recording artists have often attacked the establishment in their songs, rockers and singer-songwriters have traditionally relied more on allegory and metaphor. Their songs were not so much topical as moralistic; they were not so much satire as civic poetry.

In a 1982 song, Russian rock star Yuri Shevchuk, appealed for an unnamed hero who found himself in the “planet’s hot spot” Although everyone assumed that the song was about the Soviet invasion of Afghanistan, the fact that it did not point a finger at anyone specific made it acceptable for the official Soviet anti-militaristic ideology.

The same metaphoric references are found in another hit by Makarevich’s band Mashina Vremeni (Time Machine), entitled “The Turn.” Its key line, “To be frank, we’re all afraid of change,” carried an unambiguous topical message, but on its face, was just a general philosophical observation about some hypothetical conservatives. Around the time of Perestroika there was a period when songsters pulled no punches and produced political anthems that were fit for being sung in stadiums and even at barricades. But there was no irony in them.

While Vladimir Vysotsky and Alexander Galich were poets who made indictments of society and the state with searing irony and directness, even they addressed phenomena in the abstract, seldom giving names and pointing fingers. “Many times we were silent, but of course we were silently for, and not against,” Galich wrote about his songs.

Today, however, the most popular satirical songs refer to specific individuals and events. They aim not to create an all-encompassing artistic image, but to name a person or subject and describe what the author thinks about them. Popular rapper Ivan Alexeyev (also known as Noize MC) devotes a song to a tragic accident on Moscow’s Leninsky Prospect involving a car belonging to the vice president of the oil company Lukoil. The song begins with an introduction: “Let me introduce myself, my name is Anatoly Barkov…” The monologue that follows neatly sums up the credo of Russia’s current overlords: “We are people of a different mould, we are creatures of a higher order, we do not know of any problems that a bribe couldn’t solve.”

When a conversation gets personal, the lyrics may lose some of their poetic sensitivities, but the message becomes clearer. This is what topical satire is all about.

The song “Kholuyovo” uses the same method. The song doesn’t just show provincial bosses going out of their way to prepare a red carpet to welcome some abstract federal bigwig; it reports that “Putin is coming to Kholuyovo.” The effect is rather like alternative news, the kind you don’t see on federal TV channels where criticism of government officials and events they take part in is taboo.

Another Russian Internet hit in recent weeks talks about mental hospital patients “voting for Putin.” It leaves it up to the audience to decide whether to join them or not. That clip, like “Kholuyovo,” never went beyond the blogosphere.

Today’s Russian political satire is both effective and somewhat paradoxical. In the most revolutionary and turbulent periods of Russian history, when censorship was swept aside and long pent-up passions were finally expressed, the songs were not so much about the leaders and their legion of lackeys, but about some inner degeneration in all of us.

Now, when there are certain tangible ideological taboos, when life has to follow tacit “notions” and when the media lament social apathy, there is suddenly a groundswell of songs that are hard-hitting and critical, similar to speeches at opposition rallies. So far they are only as popular as the number of people who have listened to them on the web, but the figures are growing steadily. Perhaps these are the makings of a new musical mainstream that will usher in a new era. In any case, there are enough catchy satirical songs in Russia today to fill a themed festival that might become a version of the one in Kiev’s Maidan Square, the cradle of Ukraine’s Orange Revolution. But it would be better if it became a version of Hyde Park.

Mikhail Margolis writes about music for the Russian daily “Izvestia.”