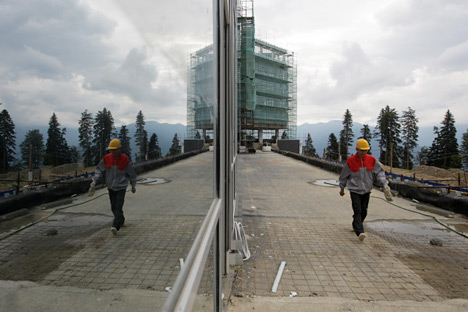 Although the 2014 games are still more than two years away, the southern Russian city that will host them has already undergone a transformation.

Preparations to the 2014 Olympic Games in Sochi are in full swing. Source: Mikhail Mordasov

The 2014 Sochi Winter Olympics can already claim to be the most significant project in the history of modern Russia, and probably one of the most challenging and complicated Games to organize in all of Olympic history. The countdown to the start of the Games has begun, and it is already possible to see the outlines of the Sochi project.

The Sochi Games, Russia’s first ever Winter Olympics, achieved their unique status long before the summer 2007, when the International Olympic Committee awarded the Games to the Russian city. It had never before occurred to anyone to hold winter sports competitions in the sub-tropics, and it’s no wonder many IOC members were surprised that it would be possible to build an international-standard ski resort only a 40 minute drive from the sea. But despite the unusual nature of the project, IOC members were impressed by the Russian bid.

What immediately struck all those who looked at the Russian plans for preparing for the Games was the cost of the project. The initial cost was put at 316.4 billion rubles (about $12 billion at the 2007 exchange rate), of which 185.5 billion rubles was to come from the federal budget, with the rest coming from the private sector. Later, Russian ministries revised the total cost of the Olympics to close to 1 trillion rubles, putting the Sochi project on par with the 2008 Summer Olympics held in Beijing, to date the most expensive Olympics in history. The IOC insists it isn’t entirely correct to mix the Olympic budget proper (which doesn’t exceed the standard $2.5 billion) and related projects. But that doesn’t make much difference.

Considering the enormous amount of work to be done in a relatively short time, the cost doesn’t seem so exorbitant. Take, for instance, the 11 Olympic facilities needed for the games: ski complex, bobsleigh track, snowboard park, skating center, ski-jump and several ice arenas. These needed to be located, as customary for the Winter Olympics, in two clusters. The flat cluster, which will host ice hockey, figure skating, curling, short track, and skating, will be located in the Imeretinskaya Valley. The mountain cluster, which will host Nordic skiing, skiing, bobsleigh, snowboard competitions, and more, is being built at Krasnaya Polyana. Never before in the history of Winter Games have the two clusters been so close together. Fans should appreciate this feature, and they should also enjoy the dramatic change of scenery that occurs during the descent from the sub-zero temperatures of the mountains to the mild sub-tropical coast.

Building the sports facilities proved to be the easiest part of the project. By 2012, almost all of them will be put into operation, according to Russian Deputy Prime Minister Dmitry Kozak, and by 2013 they will all host test competitions. In fact some of them, like the Rosa Khutor ski complex, are already open). Creating the necessary infrastructure in the region was and continues to be much more of a challenge.

One of the key factors in ensuring the success of an Olympic Games is an adequate transport infrastructure. Before the start of Olympic construction in the Sochi region, this infrastructure was truly in a sorry state. The links between the clusters were the greatest cause for concern. In order to provide adequate transportation options, organizers decided to build a two-tiered combined highway and railway. This 30-mile-long construction will run almost completely through tunnels or on overpasses along a riverbed. Considering the technical complexity of the project, it is not surprising that even after pruning the budget the cost tops $6 billion, making it the most expensive road in the world in terms of cost per mile. But that’s not all. Sochi, which in fact has only one main thoroughfare, will get a bypass road that involves the construction of 15 bridges and five tunnels, more than 6 miles in all. And that doesn’t include less spectacular but equally important projects such as the building of a new railway spur required to carry nearly 100 million tons of cargo to the region, the construction of a new airport (now already in operation), expansion of the cargo port, the building of six new power plants and 16 sewage treatment substations, among others.

Also noteworthy is the complete restructuring of the region’s hotel complex, which is a must if Sochi is to become a year-round international resort, a goal the authorities are determined to meet. The hotel capacity will be increased several times over to accommodate an extra 42,000 guests. Most of these will be three-star hotels, many of which will be converted to residential space after the Olympics. As early as spring 2014, when the Olympics and the Paralympics are over, Russia will have a fully rebuilt region that fits with the vision of a true international resort.