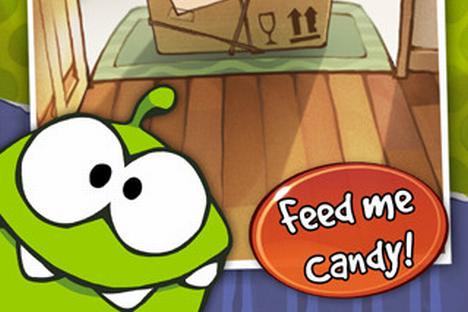 Efim Voinov, who created Cut the Rope with his twin brother, talks about the creative process in writing code.

When and how did you come up with the idea of the game Cut the Rope? Was it inspired by some existing game or concept?

Cut the Rope actually grew out of the concept of ZeptoLab’s first iOS game, Parachute Ninja. We had ropes in Parachute Ninja, so we developed the rope engine, and spent a lot of time tweaking the way the ropes look and behave. Though excited about the design, our friends and family were confused by the controls. We came to the conclusion that it wasn’t visual enough, so we dropped the rope and replaced it with a parachute. Parachute Ninja was released in February 2010, and was a success, with the free version reaching the top 10 on the iTunes chart, and the paid version top 20.

We spent a long time working on the ropes’ physics however, and decided not to trash the rope engine. Instead, we made a game based around rope physics. As such, Cut the Rope was born.

How long did it take to develop it? How many resources (money, people) have been required?

My brother, Semyon, and I developed Cut the Rope with very little money and even fewer resources. We’re very lucky to have a lot more people helping us now.

What are your success indicators (number of downloads, players or revenues generated?

A. The game has been downloaded more than 60 million times (across all versions and platforms). An average gameplay session lasts 3 minutes. Om Nom [the candy-obsessed monster] eats an average of 24 million candies per day.

That’s a lot of candy. What do you think the reasons are for this success? Did you expect it?

While developing Cut the Rope, we knew we had something worthy, but of course we never expected this kind of enormous success. But now that we’ve seen it, we are working constantly! Our goal is not just to put out a lot of new titles and updates – we want to provide our users with quality updates, increasingly more strategic gameplay, and cute, fun new adventures for Om Nom or new characters. Our fans have been very loyal to us, and we work hard to continue to provide them with the same great quality gaming experience that they have grown accustomed to.

Additionally, while it’s important to us to provide these quality games and updates, we also know our fans want to see something new. Our product calendar is loaded with updates for Cut the Rope and new game titles we’re experimenting with for 2012!

Have you developed, or do you intend to develop ancillary products (TV, comics or gadgets)?

Our goal is to extend Om Nom and Cut the Rope to as many places as possible. We are working on bringing the game to other platforms, including smart TVs, as well as mobile platforms such as RIM and Symbian.

We are also partnering with OEMs to bundle trial versions of the game on new tablets and devices. Some of our OEM partners include Sony Ericsson, Toshiba and Amazon for the Kindle Fire.

On the merchandising side, we see tremendous opportunities to bring Om Nom into homes around the world. A limited number of plush toys were just recently released in about 30 U.S. retail outlets and we are expanding that presence with more retailers leading into the holiday shopping season. A variety of T-shirts are also available, and new items will be rolling out over the next several months.

2012 will be a huge year for Om Nom and you should expect to see him in many shapes, forms and sizes on a global scale!

Mobile games developer Efim Voinov created Zeptolab in 2009 with his twin brother, Semyon. Together, they became known for their hit games Parachute Ninja and Cut the Rope.

Efim worked on numerous mobile games and applications for almost every popular mobile platform, and has experience with many programming languages and computer technologies.

Born in Moscow in 19XX, he started writing games at the age of 8, when parents bought his first ZX Spectrum computer.  He graduated from the Moscow Institute of Electronics and Mathematics, and earned his master’s degree in Computer Science. Even as a student, Efim worked in his own PalmOS development company, MuddyGlass, where he developed games and applications together with his brother.

«While studying in the university, we developed games in our spare time. We published some of our creations on a site called PalmGear.com. After we graduated in 2005, Misha Lyalin hired us to work at a gaming company he owned, Reaxion, where we gained experience developing for different mobile platforms. Later, we left Reaxion to form ZeptoLab,» Efim said. «Nearly two years later, our little gaming company has grown six times over and we’re working nonstop to put the best games on the market.»