Celebrating the 25th anniversary of the Delhi Declaration 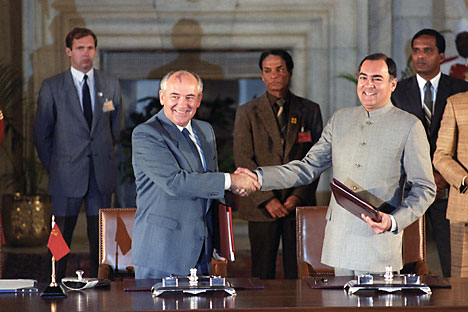 The Delhi Declaration on the Principles of a Nuclear Weapon Free and Non-Violent World signed by Rajiv Gandhi and Gorbachev on November 27, 1986 was a landmark global document.

This is not only in the context of the recent focus on complete nuclear disarmament, but also in the Soviet & Indian ideological acceptance, the concept of non-violence as propagated and practiced by Mahatma Gandhi was followed sincerely by Indian and Russian leaders.

It is not surprising that such a vision would emerge from a land which has long associated with the non-violent ideals of the Buddha and Mahatma Gandhi. The Action Plan introduced by India in 1988 deserves to be remembered, both for its wisdom and for the abiding relevance of its powerful vision of a path toward a safer and more peaceful world.

Rajiv Gandhi introducing his Action Plan to the UN General Assembly on 9th  June 1988, had a lot to say about nuclear deterrence. He called it the “ultimate expression of the philosophy of terrorism”, a doctrine that, in his words, “will take everybody like lemmings to our own suicide.” Rajiv Gandhi also stated in his speech to the General Assembly in 1988, “the battle for peace, disarmament and development must be waged both within this Assembly and outside by the peoples of the world”. He also added that, “the ultimate power to bring any change however rests with the people and only then this idea can move in the right direction”.

The Delhi Declaration, issued by Rajiv Gandhi and Mr. Gorbachev on November 27, 1986, called for the complete destruction of nuclear arsenals before the end of the century, and asserted the importance of solving problems in a non-violent way. It reflected high expectations of a better world after the end of the Cold War, which has since been betrayed.

While President of the former Soviet Union, Mikhail Gorbachev, believes that the ideas of the Delhi Declaration on the principles of a nuclear weapon-free and non-violent world are more relevant today than 20 years ago when it was signed.  According to Mr. Gorbachev, the crises in former Yugoslavia, Iraq and Iran proves that there is no alternative to the rejection of violence in international affairs preached in the Delhi Declaration, according to him, "reliance on the use of force, on the role of the world policeman cannot do any good, but can only make processes more painful and provoke explosion." Mr. Gorvachev said this in a meeting with the foreign media in Moscow on the eve of his 75th birthday. He also added that “US’s global leadership is only possible through partnership with other nations”. According to him, Iran and some 30 other nuclear threshold countries can only be persuaded not to aspire to nuclear weapons if the Big Five begins to effectively reduce their nuclear stockpiles. Mr. Gorbachev during the speech warmly recalled his meetings with Rajiv Gandhi
and the Policy of cooperation between India and Russia.   Gorbachev stated that Rajiv Ghandi followed the policies of Indira Ghandi and Pdt. Nehru and as India-Russia cooperation during their time flourished in different spheres, it will continue in the similar way even if the government changes in either country.