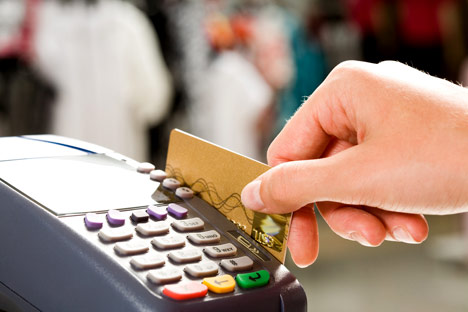 Seventy-four percent of Russians use bank cards, but 92 percent of all cards issued are salary cards. There are 11 million credit cards in circulation in Russia, a country of 140 million people. Source: PhotoXPress

Only 24 percent of Russians take out loans and only 18 percent have deposits with banks, while most Europeans use two to four financial products, and some, five to six, according to Ivan Svitek, chairman of the board of Home Credit Bank. He believes that Russia’s retail banks have a lot of potential, but they need to expand into more regions and embrace new technologies.

There is the reason for this optimism. According to the World Bank, Russia has only a quarter of the global average number of bank branches. Additionally, IMF research shows that the debt of individuals to credit institutions in Russia amounts to only 9 percent of GDP. In comparison, in the United States, the ratio of personal debt to GDP is 85 percent. Furthermore, 44 percent of Russians live in parts of the country where there are no retail banks.

According to the National Agency for Financial Studies, 74 percent of Russians use bank cards, but 92 percent of all cards issued are salary cards – issued by a bank at the insistence of a company for employees to access salary deposits. The agency reports that as of Sept. 1, individuals’ credit card debt to banks had reached 350.2 billion rubles ($11.3 billion). At that time there were 11 million credit cards in circulation in Russia, a country of 140 million people.

The market for retail loans and credit cards in Russia began to explode in the mid-2000s, when incomes began to grow. The business peaked in 2008, just before the crisis. The banks most active in this sector were private commercial banks and Russian subsidiaries of international banks. This market was very attractive because it was underdeveloped, but it also involved high risks, since many Russians have unofficial incomes. A popular tactic was the one employed by Russky Standart Bank, which sent credit cards through the mail without even receiving applications from consumers. A consumer could simply open his mailbox, tear open the envelope, activate the card and use it. The bank would charge up to 250 percent in annually, including in undisclosed commissions, and many borrowers learned this only when the time came to pay. This aggressive, if controversial, policy secured Russky Standart Bank the leading position in the Russian market for credit cards; the bank has issued more than 32 million of them, and according to the Frank Research Group, its current share of the market is 18.5 percent.

The 2008 crisis resulted in mass non-payments on credit cards, and the banks changed their tactics. They wrote off small debts ranging from 10,000-40,000 rubles ($325-$1,300) if there was little chance of collecting them; however, amid the deficit of available funds and reduced number of new cards being issued, banks turned to harsh collection techniques. Unrecoverable debts were sold to debt collectors, who applied illegal methods to collect them, including beatings and threats.

After a series of banking regulations came into force in 2008, banks began applying more discretion in choosing borrowers. They now ask the recently formed credit history organizations to assess borrowers’ solvency. And market conditions have changed, with state banks increasing their credit card businesses. According to Frank Research Group, two of Russia’s major state banks, Sberbank and VTB, have the second and third positions in the market, with a 13.3 percent share and 10.1 percent share, respectively.

State banks have access to cheap money and can afford to offer loan rates below the market average. Sberbank offers a minimum annual rate of 17 percent for ruble-denominated loans and rates 5 to 6 points below that for cash loans. Although many experts regard the involvement of state banks as having a negative impact on market development, private banks have actually reported an increase in the number of credit cards they have issued. Credit cards now account for more than 13 percent of Home Credit Bank’s portfolio, while Russky Standart Bank, with 52 percent of its loan portfolio made up of credit cards, expects its net profit to reach 5.3 billion rubles ($171 million) in 2011.

Currently, most banks provide credit cards free of charge, although some still charge between $60-$100 to issue a card. Interest rates are higher than those on regular loans, but cards can be obtained within 15 minutes. Cardholders have to pay not only interest but also card service fees, which, as a rule, amount to a minimum of $20 per year. Some banks do not charge anything for the first year, but all banks charge a commission (from 2.5 percent of the loan, or a minimum of 200 rubles ($8)) for withdrawing cash from an ATM.

The expansion of the credit card market has prompted retailers to cooperate with banks. As a result, you can do without cash in big cities.

“Credit cards are mainly used to buy on credit during the grace period, so most credit transactions with cards are completed at a zero rate,” said Mikhail Ioffe, the vice president and managing director of VTB24 in St. Petersburg.

Although the anxiety caused by the debt crisis in the eurozone prevents bankers from being optimistic about the future, the impressive growth of consumer lending is hardly at risk. Russian banks have promised not to decrease lending, as was the case three years ago, but the cost of borrowing may become more expensive.