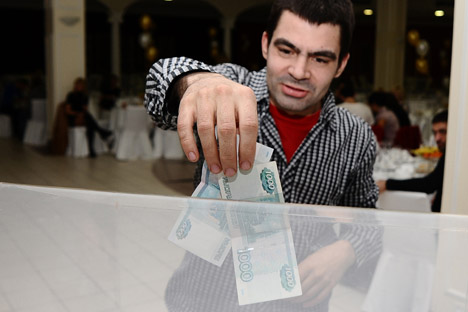 Charity initiatives in Russia come from below, not from above. Source: PhotoXPress

Believe it or not, but a Charity Striptease was held in Moscow last October. The event was planned by Moscow activists – Elizaveta Glinka, who works in palliative care, and journalist Igor Chersky. The entry fee was warm clothing for the homeless: professional dancers put them on behind the scenes, paraded on stage and then shed them.

“We already live in monstrous gloom: the flocks of patients, constant shortage of clothes, endless phone calls from the provinces,” Glinka said in an interview with “Russky Reporter.” “This event is just a humorous request for help.”

The moral and ethical side could be debated at length. However, one thing remains indisputable: charitable organizations in Russia today are surviving by doing what they can.

According to 2011 statistics, 73 percent of funding for nonprofit organizations in Russia comes from businesses and private citizens. This inversion is on many levels the result of a common creed: Survive without the state. While nothing is done from above, initiative comes from below.

However, the need for philanthropic aid is becoming increasingly evident. According to a poll conducted by “Russky Reporter” at the Donors’ Forum in October 2011, the majority of respondents believed that the main obstacle to further development of charity in Russia is “inadequate government regulation” and “underdevelopment of charity infrastructure.”

At the same time, the Internet is flooded with cries for help. One of them comes from Glinka, who is better known as Dr. Liza. On her LiveJournal blog and social networks, she appeals to readers to raise funds for her organization, Fair Aid, which works with the poor and homeless. “I don’t want to work with the state, I have a private foundation. It’s one thing not to fight the state, but it’s another thing to cooperate with it. The one platform where I can talk about the fact that there are people living in doorways is my blog. I don’t have a TV channel, radio, paid-for journalists, or a public relations manager. Just a blog. Fortunately, people are listening,” she said in an interview with Sobesednik.ru.

As far as the government is concerned, according to the Boston Consulting Group, state budget funding for nonprofit organizations in Russia amounts to just 5 percent – a tenth of government contributions to non-profits in developed countries and a quarter of spending in developing countries. Tax incentive programs to encourage increased corporate contributions and the promotion of charitable work just don’t exist. Meanwhile, the small actions the state does take increasingly discrediting themselves. A charity concert for the Federation Fund in late 2010 that involved international stars and Prime Minister Vladimir Putin ended in a huge scandal: the mother of a child with cancer announced that after four months, she still had not received the promised money. The Kremlin charity events, which are heavily publicized and closely covered by journalists, are often reminiscent of pompous PR campaigns.

However, no matter whether it looks extravagant or not, there are those who argue that we perhaps turn a blind eye to whatever form charity takes – especially as those who need help getting medicine, shelter, or a hot dinner do not care.