The best offense is a good defense 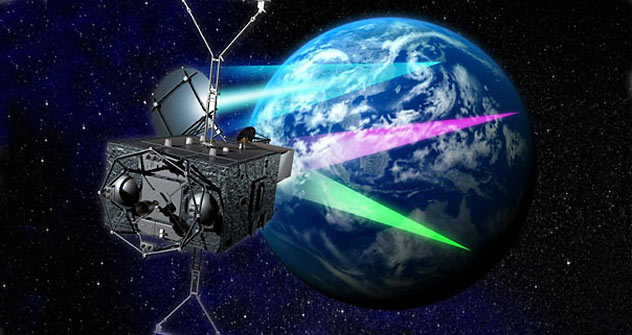 The star wars are feasible in the near future. Source: NASA

The U.S. Department of Defense has announced an ambitious new space program; it will consist of a veritable cobweb of satellites enveloping the entire planet. The satellite network could be created on the basis of GPS and Iridium low-orbit communications satellites. Accordingly, Sergei Zhukov, director of the space and telecommunications branch of Russia’s Skolkovo modernization program, has set an essentially similar task.

According to Zhukov, Russia should consider opportunities for amalgamating various satellite systems: “This is the way the satellite cover for a future technology-based noosphere will be created.” But for what purposes will this cover actually be used?

There is no doubt that military purposes will be first in line. Satellite surveillance forms the foundation of modern armed forces, and the goal of future wars will consist in dealing with blows to the adversary’s most sensitive locations, rather than in grabbing land. This means that armor-based ground forces may well cease to play their current role. In the sphere of strategic weapons, the focus is shifting away from the classical “nuclear triad” towards conventional systems based on high-precision arms with different delivery mechanisms. Such systems cannot be used without a large quantity of orbiting support machinery, such as satellite-based reconnaissance, warning, forecasting, communications, navigation and targeting devices.

In 2004, General Vladimir Slipchenko, Chief Specialist of the Military and Strategic Research Centre of Russia’s General Staff, told me in an interview: “The main and top priority of the United States is not to create a national missile defense system but to practice application of the space-based intelligence and data gathering infrastructure for waging remote-controlled wars.”

According to General Slipchenko, the world’s leading countries will possess between 70,000 and 90,000 high-precision weapons by 2020.Supporting them will require the deployment of a large number of satellites. As a result, hundreds of purportedly harmless spacecraft are becoming an integral part of the main weapon of the 21st century.

That said, these satellites are very vulnerable to attack and constitute the Achilles’ heel of modern weapons systems. During the Cold War, both the United States and the Soviet Union conducted tests aimed at destroying targets located beyond the atmosphere, but stopped doing so in the late 1980s out of concerns that the resulting debris would interfere with operation of military and other satellites. Today, however, humanity seems to be returning to the idea of star wars.

China successfully downed its own weather satellite on Jan. 11, 2007. A year later, on Feb. 21, 2008, the U.S. brought down one of its spy satellites, which was spinning uncontrollably out of orbit. Ostensibly, the missile launch from aboard the cruiser Lake Erie in the Pacific was motivated solely by concerns over the safety of people on earth, who might otherwise have been hit by satellite debris. The satellite was hit at an altitude of 247 km with a specially upgraded SM-3 missile, which is now part of the plans for the European missile defense system.

But since it is actually possible to destroy satellites, sooner or later the need will arise for protecting them, which could potentially lead to different kinds of weapons ending up in orbit around the Earth. Former U.S. Secretary of Defense Robert Gates already announced that protecting American spacecraft is a priority for the U.S. Defense Department.

Russia’s military and politicians have long expressed concerns over the potential militarization of space. When he was commander of the space forces, current Roskosmos head Vladimir Popovkin said: “If anybody decides to deploy weapons in space, we will be forced to take appropriate measures in order not to be left out in the cold.”

Does this mean that the militarization of space, driven by the need to protect satellite constellations and formations, is only a matter of time? If militarization is understood as deployment in near space of systems capable of independently destroying targets located in space, in the atmosphere, or on the ground, then the answer is yes. In this case, space will become a weapons turret aimed at the entire planet.

It is worth noting, however, that ground-based systems might also successfully provide security for satellites. In 2007, First Deputy Prime Minister Sergei Ivanov assigned Russia’s defense-industrial complex the general task of creating a unified system of air, missile and space defense. The air defense concern Almaz-Antei has been appointed the lead company and developer for this project, which is scheduled for completion by 2015. According to Ivanov, “it will combine both combat and data complexes, as well as existing systems, which should, in combination, consistently provide all three kinds of defense – air, missile, and space.”

It is hard to say which option the Americans will choose for protecting their satellites, which already number over 500, but we will all feel safer if military launch pads remain deployed on the predictable and much better studied ground surface, leaving outer space for spacecraft working for the sake of the “noosphere of the future.”