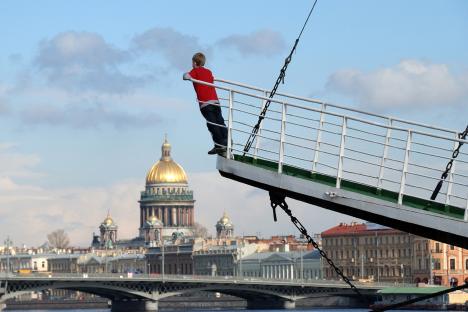 View from the bridge: the sights of the picture-postcard waterfront area include the splendid St Isaac’s Cathedral, above. Source: PhotoXPress

There are plenty of ways to experience the atmosphere and beauty of St Petersburg, including canal trips, literary tours and rooftop excursions.

Peter the Great, the founder of St. Petersburg, was a bit of a copycat. He copied the Dutch fleet and French architecture, and he brought the concept of the whole new city from Italy. St. Petersburg is often known as the Venice of the North, since this city of rivers and canals sits on 101 islands, just slightly fewer than Venice itself.

In its time, St. Petersburg was “a window to Europe” where cargo and passenger ships arrived from all over the world. Peter wanted foreigners to be struck immediately by the city’s grandeur and beauty, which is why the city was built in such a way that the waterfront would give visitors their first impression. Because of the city’s location and climate, traffic on the waterways begins only in May, but shortly after the season opens, the rivers and canals are filled with cutters, speedboats and ships.

“A ride along the rivers and canals is a must for every visitor to St. Petersburg,” said Yana Khrustovskaya, head of a St. Petersburg travel agency. “It gives you an entirely new look at the city. Our tourists are invariably amazed at the harmonious and magnificent view of the city from the water. I, for one, adore the romantic look of St. Petersburg by night.”

What is it that makes the city so attractive by night? Its palaces and bridges are lit up as the gentle twilight descends on the city – which has very little total darkness in the height of summer. The interplay of light and shadow brings out St. Petersburg’s impressive architecture. If you take a boat to the middle of the Neva River, at about 2 a.m. during the summer season, you can watch the raising of the drawbridges, which go up to let through the huge liners that cruise here every summer night.

The name of Fyodor Dostoyevsky is inextricably linked to St. Petersburg, which is not only the setting of his novels, but also a character in them. Literary scholars have counted that St. Petersburg figures in about two-thirds of Dostoyevsky’s writings. It is easy to find on the city’s maps the homes of his characters and places associated with the writer’s life. It’s no wonder that many travel firms offer thematic tours.

“Our company’s researchers have developed itineraries that acquaint visitors with Dostoyevsky’s Petersburg. The writer lived here for 28 years and moved 20 times. That is why so many addresses are linked to his name,” said Valery Fridman, director of the Mir travel agency.

You can start your tour of Dostoyevsky’s Petersburg at his memorial apartment on Kuznechny Pereulok, where the writer worked on his last novel, “The Brothers Karamazov.” Another must-see destination is the mysterious Mikhailovsky Castle, which used to house the Engineering School where Dostoyevsky was enrolled in 1838 after moving to St. Petersburg from Moscow. The castle is interesting for another reason: It was built at the behest of Emperor Paul, who wanted to have a shelter where conspirators could not get at him. Ironically, it was there that Paul was murdered.

After graduating from the school, Dostoyevsky lived on Grafsky Pereulok at the corner of Vladimirsky Prospekt. There he wrote his first novel, “Poor Folk,” which brought him instant acclaim in literary circles. Later, he moved to a house at the corner of Voznesensky Prospekt and Malaya Morskaya, where he wrote “White Nights.” It was about that time that he became acquainted with revolutionaries and joined their secret society. In April 1849, members of that circle were arrested on a tip-off and incarcerated in the Peter and Paul Fortress. Dostoyevsky was among those arrested and sentenced to death. On Dec. 22, 1849, he was brought, along with twenty other convicts, to Semyonovsky, the place of public executions.

“I have told tourists this story countless times and each time it sends a chill down my spine,” said Elena Yakovchenko, a guide with the Mir travel agency. “Three pillars were put up on the square and the conspirators were to be hanged in seven rounds, three at a time. Dostoyevsky was in the second three, waiting his turn, when a messenger arrived with a new sentence: death by hanging was commuted to four years’ hard labor.”

After serving his term, Dostoyevsky lived in Moscow for a while before returning to St. Petersburg and settling on Stolyarny Pereulok, where he wrote his most famous novel, “Crime and Punishment.”

In summer, a tour of St Petersburg’s rooftops offers magnificent views of the landscape and the monuments, but you’ll need a sensible pair of shoes. You can scale at least four roofs on a three-hour excursion in the historic heart of the city and get a different perspective from each one.

From the six-storey building on the quay of the Fontanka River, opposite the Circus, you overlook a junction where, in the evening, the winding car headlights undulate and interweave with the riverboat lights. This synchronised dance is hypnotic.

Near Mokhovaya Street the landscape is quite different. On the horizon, the illuminated domes of Kazan and Saint Isaac’s Cathedrals and the Church of Our Saviour on Spilled Blood, plus the spire of the Admiralty are all aligned, like golden balls set along the tops of the roofs.