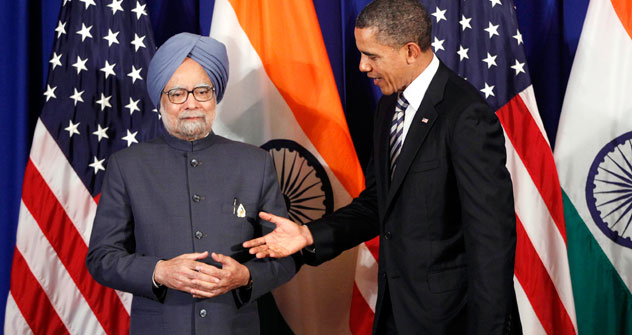 Is India moving away from the Nehruvian ideals in foreign policy and is moving closer to the US at the cost of its ties with Russia? Does Moscow need to think afresh about its ties with India? asks Andrei Volodin

In early October of 2000, during Vladimir Putin’s first visit to India, I happened to take part in an international scientific conference in New Delhi on security issues in the Asia-Pacific Region, sponsored by the influential Indian Council for Social Science Research.

At that forum, it was difficult not to notice the swagger of Indian expats in the United States, who did their best to convince participants that America is India’s preeminent strategic ally. At the time, I regarded this attitude as the aspiration of a part of the Indian elite, albeit a tad too deliberate, to establish new foreign policy guidelines for the world’s largest democracy while also keeping the traditional ones intact. As a specialist in Indian affairs with a long track record, I could be overly suspicious, but I’ve been of the increasingly unalterable opinion that the “Nehru course” is being dismantled, and if we still consider ourselves friends, we need to discuss these sensitive matters candidly.

Aren’t we indeed witnessing a gradual rejection of the idea of a multi-polar/polycentric world? Isn’t India’s foreign policy establishment using China’s rapid economic growth as ideological grounds for abandoning its independent orientation in the global geopolitical space? I believe these are anything but meaningless questions, and here’s why.

India has invariably promoted strengthening the security system in the region that the Americans, justifiably in my opinion, call “Greater South Asia/Greater Central Asia.” They include in this geopolitical space South and Central Asia proper, in addition to Afghanistan and Iran. Until recently, New Delhi was an active proponent of the idea that the countries in this region should be the ones tackling its complicated problems. Moreover, this approach was also taken to its logical conclusion with regard to the Afghan settlement, while Beijing continued to place its hope in the authority of the UN Security Council.

It seems to me that India’s position has lately undergone a metamorphosis that is hard to explain. At a recent forum in Istanbul, Indian diplomacy appeared to support the American idea of a “new Silk Road,” which is intended to maintain a “balancing” influence of out-of-region forces in “Greater Central Asia.” This raises a two-pronged question: Who are the out-of-region forces going to “balance” (China, Russia, etc.) and what is India’s strategic role in this type of geopolitical manoueverings?

Further, the Asian (and to a certain extent the global) media has been increasingly covering India’s large-scale rearmament and armed forces modernisation programme. The idea of modernising the army makes sense from a technical and technological as well as a military and political point of view, especially after the West’s recent actions in the Arab world threatened to subvert the international relations system completely and accelerate the conventional arms race. However, a closer look at the facts and the events invites different conclusions. First of all, the resurrection of the idea of an “alliance of four democracies” (the US, Japan, Australia, and India) – an American-Japanese-Indian “strategic dialogue” being its initial phase – is beginning to seriously worry  Beijing, which calls this concept nothing other than an “Eastern NATO.” Some Chinese political analysts have already urged their government to respond by stepping up their foreign policy, including foreign economic relations, in the South Asian region that India is so sensitive about.

Secondly, the new trends in the way the Indian foreign policy establishment is thinking bring back memories of the target set by Prime Minister Manmohan Singh to achieve at least 9% for at least the next decade. (I would like to add that given the complexities of India’s domestic situation – particularly an increase in the share of youth, i.e. those younger than 35, to 70% of the total population – the economy needs to be growing at a rate of at least 7%). There is no convincing answer yet for how to marry vigorous economic growth with active rearmament under the current Indian circumstances.

Thirdly, the new political thinking trends bewilder those in the Russian leadership who have adopted the multi-vector foreign policy model as part of their idea of Russia’s international role. In a nutshell, their thinking goes like this: You can’t force love, and if America is now India’s best friend, partner and ally, we will become more active in developing our relations with China. Particularly as China faces at least as many domestic problems as we do, and combining the efforts of two super large entities could have a powerful “multiplier effect” on our development. A friend of mine at the Russian Foreign Ministry, who is trying to grasp the logic of India’s behaviour with regard to the Shanghai Cooperation Organisation, confided to me: “I just can’t understand our Indian colleagues. We are doing our best to welcome them with open arms, but it seems like they are gently pushing us away. Perhaps they have already made their strategic choice in favour of America?” Frankly, I couldn’t succeed in convincing the diplomat otherwise. Apparently, Russia needs to pause and think afresh regarding India while developing relations with both China and South Asian countries based on our strategic interests.

Which brings to my mind trenchant comments by M.K. Bhadrakumar, a former Indian diplomat and astute foreign policy commentator, sometime ago. At a time when Europe is in disarray and America is in decline, China isn’t bothered about India’s ‘military modernisation’ programme… It also seems to understand our compulsions to exaggerate the ‘threat perceptions’ so as to justify the massive military expenditure at a time when the economy is on a distinctly downward slide and we face a ‘resource crunch’ very soon. In brief, Beijing estimates that this is a superfluous, contrived path and India will realise it on its own.”

The strength and vitality of the “Nehru course” lie in the fact that India’s first prime minister always played his own game and always defended Indian interests. Time has shown that this is the only “policy game” that will always be both effective and up to date.