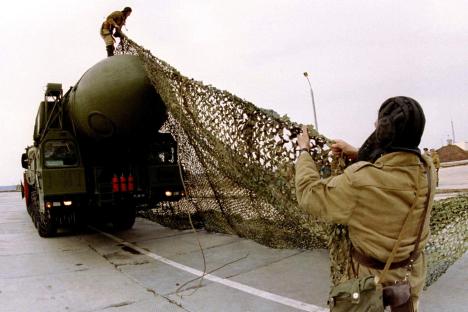 Rocket men: Progress in the stalled ABM talks may have  to wait  until after elections in Russia and the US. Source: Reuters/Vostock-Photo

Experts have been reading between the lines of President Dmitry Medvedev’s announcement on retaliating to the US missile strategy.

After unsuccessful talks with President Barack Obama in Honolulu on the deployment of the US anti-ballistic missile system (ABM) in Europe on November 23, President Dmitry Medvedev issued his toughest statement in his four years as president.

The US says the ABM strategy in Eastern Europe has been prompted by the growing threat Iran poses to the European allies, and that Russia has not the slightest reason for taking any military counter-measures. Moscow wants Washington to provide at least legal guarantees that the American ABMs near Russia’s borders will not be targeted at Russia. But according to unofficial reports, Mr Obama made it clear that neither he nor any other US president could ever provide any legal guarantees.

In response, Mr Medvedev warned that if the US and Nato do not heed Russia’s warnings, “Russia will deploy modern offensive weapons systems in the west and south of the country, thereby ensuring its ability to take out any part of the US missile defence system in Europe.”

He listed a number of counter-measures that would be taken, including: deploying early-warning radar and Iskander missiles in Kaliningrad; reinforcing the protective cover of Russia’s strategic nuclear weapons to develop Russia’s air and space defences; installing advanced missile defence penetration systems and new highly effective warheads; and developing measures that can disable missile defence and guidance systems. Mr Medvedev also said that Moscow reserves the right to withdraw from Start (the Strategic Arms Reduction Treaty) signed by Mr Medvedev and Mr Obama in April 2010.

But experts say all of the measures that Mr Medvedev has threatened to take are either already in place or due to be introduced.

For example, the Voronezh-DM radar is already being built near Kaliningrad and due to be working before the end of the year. And the aerospace defence system (VKO) is formally already in place, although VKO forces do not yet have new weapons. The idea of deploying Iskanders in Kaliningrad, an enclave surrounded by Europe, is not new either.

The experts do not believe that Russia is ready to withdraw from Start. Russian strategic forces are ageing and are being decommissioned. They are already down to the level at which they were to be reduced, Alexei Arbatov, head of the Russian Academy of Sciences’ Institute of International Economy and International Relations (Imemo), told The Moskovskie Novosti . Colonel-General Viktor Yesin, former chief of staff of the strategic missile forces, says the new ballistic missiles Russia is building have the potential to penetrate any anti-missile defence for the next 20 to 30 years.

Some analysts believe Mr Medvedev’s statement is a signal of displeasure, but one that invites the US to keep talking. Some military experts say it is about impressing voters. Major General Vladimir Dvorkin, chief research fellow with Imemo, says a compromise will be agreed after the Russian and US elections.

But that view was challenged by Russia’s permanent representative to Nato, Dmitry Rogozin. “The issues connected with the country’s strategic security cannot be packed into matters of electoral expedience,” he said.

Washington’s reaction to Mr Medvedev’s statement has been relaxed. Tommy Vietor, the White House spokesman, said the US administration was still seeking co-operation with Russia, but the deployment of ABMs in Europe would go ahead.

But political scientists think Mr Medvedev’s announcement will irritate the US. “Obama has long been  touting the reset of relations with Russia as the key achievement of his foreign policy and has defended Moscow before Congress. Now the Kremlin has dealt a blow to its partner and, what is more, it has done so at the beginning of the presidential race”, Fyodor Lukyanov, editor-in-chief of Russia in Global Affairs, told Kommersant . He added: “That provides the Republicans with more ammunition against Russia: Putin is coming back and Moscow is engaging in sabre-rattling again. Obama has nothing to trump it with.”