Monitor your nuclear risk with DO-RA the radiation explorer 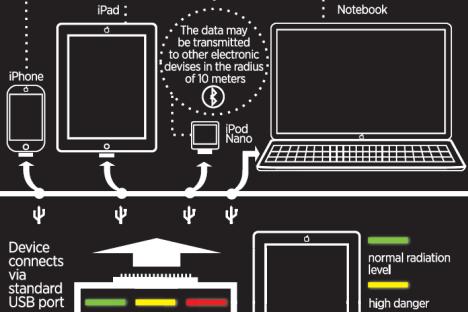 In the wake of the Fukushima disaster, a new radiation monitoring device that works with mobile phone and satnav systems is being marketed.

A Russian research engineer has designed a radiation dosimeter that can be integrated with mobile phones or added as an application. The trial version of the DO-RA mobile application (the name is an acronym of dosimeter-radiometer) is already available on the Android Market.

After the Fukushima radiation leak, Vladimir Yelin, 54, who is head of the company Smart Logistic Group, was asked to write an opinion piece about the incident.  This gave him the idea for the device.

The DO-RA mobile application operates in four different modes. It can work as a radiometer which can display a radiation map of a given area, such as a reservoir or area of land, on a mobile phone screen. It has three levels of alert: normal (green zone), high-risk (amber zone,) and an urgent evacuation warning (red zone.) It can superimpose the map onto a downloadable world map on the screen and owners can add their GPS/Glonass measurements to it. The dosimeter function displays the radiation level absorbed by the holder. In the event of exposure to a critical dose, the DO-RA alerts its holder with audio and visual signals.

Finally, in another mode, the phone can provide relevant information on potential risks for different organs of the body associated with the absorbed radiation levels. Users or their doctors can then access the data from anywhere in the world.

The very process of creating the device wasn’t smooth. “At the initial stage, assembling a team of developers was tricky; it took at least one-and-a-half to two months to find them. I stumbled upon a worthy team by pure luck”, recalls Mr Yelin.

Another problem was obtaining finance. “Very few Russian banks are prepared to lend money for such projects. Venture funds that specialise in financing new businesses are only testing the waters in the huge Russian market. Most don't like to risk their capital on inventions,” says the inventor.

Mr Yelin decided to try his luck with the Skolkovo Innovation Centre, the much-discussed Russian Silicon Valley-in-the-making. He used Skolkovo’s website to create a resume and a roadmap for the project, including a detailed description of its research and development components and a business plan. After an assessment by a panel of 10 industry experts, Mr Yelin obtained the board’s assent on the project’s compliance with Skolkovo requirements. “I have become a fully fledged participant in Russia’s innovation process, entitled to Skolkovo’s unique benefits,” he says.

“As a Skolkovo resident, OAO Intersoft Eurasia, the operator of the DO-RA project, will pay only 14pc payroll tax. We will be exempt from all other taxes. One can only qualify for such exemptions under the Russian tax system by conducting R&D work as part of proprietary innovation projects with the subsequent commercialisation of the invention.”