Bhutan gets treat of Buddhist relics from Russia 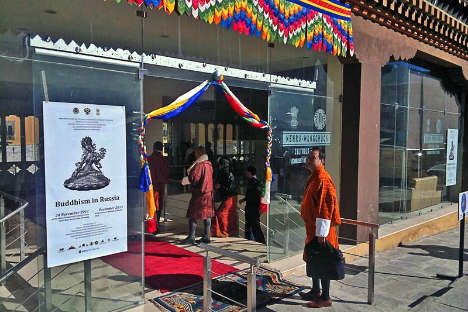 “Buddhism in Russia” opened on November 24 in Thimphu, the capital of Bhutan. This is the first ever Russian exhibition to be mounted in the Himalayan kingdom traditionally known as the Land of the Thunder Dragon.

The official ceremony at the Indian Embassy’s Jawaharlal Nehru-Wangchuk Cultural Center was attended by Bhutan’s Minister for Home and Cultural Affairs, His Excellency Lyonpo Minjur Dorji; the head of the Russian Ministry of Culture’s Department of Education and Development, O.P. Neretin; the director of Russia’s National Museum of Decorative and Applied Arts, A.N. Sysoenko; the director of the Russian Ethnography Museum, V.M. Grusman; the distinguished Russian expert on Buddhism, Professor N.L. Zhukovskaya; the Indian writer and Ambassador to Bhutan, Pavan Varma; and a senior advisor in the Russian Embassy in New Delhi, S.V. Karmalito.

This extensive, meticulously planned and elegantly mounted exhibition is divided into sections: Cosmology and the Pantheon; Life in Buddhist Monasteries; Folk Buddhism; Contemporary Buddhism; and Gifts from Buddhists to the Russian Imperial Family. Here you will see three-dimensional holographic depictions of Buddhist relics presented to the last emperor, Nicholas II; archival photographs from the 19th century; as well as contemporary shots of Buddhist monasteries in Kalmykia, Buryatia, Tuva and other regions of Russia. This exhibition also includes everyday household objects connected with Buddhism, such as toys. The toys have been carved out of birch bark and portray lamas and elements of traditional costumes with Buddhist symbols. All of this Russia has decided to give to the National Museum of Bhutan (in the city of Paro).

Various speakers at the opening ceremony remarked on the unique nature of this event, which has revealed the profound, centuries-old ties between Russia and Bhutan, also the closeness of their cultural and spiritual traditions, and their faiths. The head of the Russian delegation, O.P. Neretin, stressed the specialness of this exhibition — the first in the history of Russian and Bhutan’s friendly bilateral contacts. Neretin said that he was sure that this exhibition would “elicit lively interest among the Bhutanese and serve as a symbolic bridge connecting the peoples of Russia and Bhutan and bringing them closer.”

“The choice of this exhibition’s main theme is no accident,” said Professor N.L. Zhukovskaya. “Buddhism, the state religion of Bhutan, has not only been known in Russia for a very long time, but was officially recognized in 1741, during the rule of Empress Elizabeth Petrovna. Today there are Buddhist communities in Buryatia, Tuva, Kalmykia, the Republic of Altai, the Trans-Baikalian Krai and the Irkutsk Region, as well as in Moscow, St. Petersburg and other Russian cities.”

“The opening of this unique exhibition is a wonderful opportunity to demonstrate visually the closeness of the cultural and religious traditions of Russia and Bhutan,” said S.V. Karmalito, a senior advisor in the Russian Embassy in India. “And this will undoubtedly serve to strengthen relations between our two countries in future.”

The director of the Jawaharlal Nehru-Wangchuk Cultural Center, the famous writer and Indian Ambassador Pavan Varma, who spent many years of his diplomatic service in the Soviet Union, in Russia and in Bhutan, recalled his close acquaintance with Russia’s rich cultural heritage — the museums, architectural monuments, and libraries. “It is gratifying that the Bhutanese now have the possibility to see these treasures,” he noted. “We hope that the cooperation between our two peoples and India will continue to develop in the future.”

Bhutan’s Minister for Home and Cultural Affairs, His Excellency Lyonpo Minjur Dorji declared that Russia is well known in the kingdom as a recognized world leader in the fields of science and technology. “This exhibition for us is a genuine revelation,” he confessed. “Although educated Bhutanese are well acquainted with and admiring of the works of Russian writers, painters, actors, sculptors and cinematographers, we are seeing for the first time that, despite the great distances separating our countries, we are very close spiritually and nourished by common cultural and religious sources. We cannot cut ourselves off from the past and we hope that the cooperation in creating this exhibition will be only the beginning of fruitful cultural exchanges in the future.” In conclusion, His Excellency L.M. Dorji expressed heartfelt gratitude to the Russian side for its “truly regal gesture” — the decision to make a permanent gift of this exhibition to the National Museum of Bhutan.

Friendly contacts between Russia and Bhutan have noticeably increased of late. In October of this year, Russian Ambassador to New Delhi A.M. Kadakin represented the Russian Federation at the lavish wedding ceremony of the current Bhutanese monarch, Jigme Khesar Namgyel Wangchuk, and his Queen, Jetsun Pema.