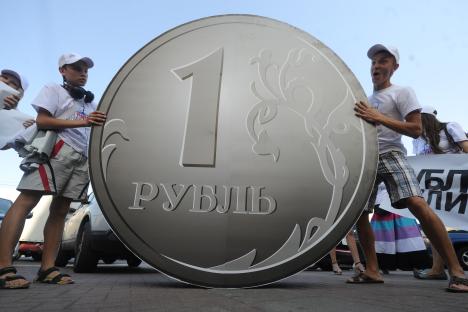 Western investors are likely to withdraw money from Russia to patch up the holes in their countries’ economies and companies. Source: ITAR-TASS

Russia is not immune to the effects of the eurozone crisis, but investors may see the country’s markets as a shelter from the storm.

Spikes in eurobond yields have convinced investors that Greece is just the tip of the iceberg, and that major economies such as Italy and Spain may be next in line. Adding fuel to the fire are rumours that Germany might withdraw from the eurozone.

Russia cannot stand apart from these problems. Russian banks will be the earliest victims, as they are partners of European banks that have already been hard hit by the debt crisis. The performance of Russian lending and financial institutions has already deteriorated markedly. And Russia is sure to suffer from the general instability caused by the European sovereign debt problem.

Europe is Russia’s main trading partner. Russia’s trade with the EU amounted to $254.8bn (£163bn) from January to August 2011, representing half of the country’s foreign trade. It is easy to see the negative consequences of the inevitable drop in European purchases of Russian products, including commodities, gas above all.

Market players cannot afford to ignore these factors. No wonder capital flight from Russia is increasing. It amounted to $13bn in September alone and a total of $49.4bn between January and September, according to the Central Bank. This month, the Central Bank almost doubled its capital flight forecast for 2011 to $70bn. The underlying cause is not only the debt crisis but also the volatility of the markets.

The Partner company’s director for financial market transactions, Andrey Mordavchenkov, takes a dim view of the situation: “Western investors are likely to withdraw money from Russia to patch up the holes in their countries’ economies and companies. If this happens, we may see a new wave of capital outflow.”

Opinions among Russian experts vary, however. Mikhail Kozakov, financial markets director with investment company Grandis Capital, says: “In the medium term, Russia is a more attractive investment destination than the developed markets. And besides, we have a trump card in the shape of our commodities. With the currency exchange situation as uncertain as the outlook for the economically developed countries, the commodity market is also becoming more interesting, at least for speculative capital.”

Some other positive factors will not escape investors’ notice. In spite of the overall mood of recession in Russia, the country’s economy is performing in a moderately positive manner. According to the State Statistics Committee (Goskomstat), industrial output increased by 5.1pc from January to October and GDP in the third quarter is expected to grow by an estimated 4.8pc.

“When times are hard,  investors always look for  alternative markets”, says Georgy Aksyonov, an analyst with the Net Trader company. “I think the Russian  market, which is part of Brics and is still growing, albeit  at a slower pace in recent years, may be promising in this situation.”

Another cause for optimism is that, in the current situation, the single European currency did not go into a tailspin, as many predicted: at the time of going to press, the euro/dollar rate has not once dropped below 1.30 since January of this year.

It should also be noted that the European debt crisis is changing the attitude to protective mechanisms such as government bonds. Investors today are clearly shifting their focus from sovereign to corporate debt. This is good news for Russia, because Russian corporations are much cheaper than their Western counterparts.

Russia’s financial authorities appear to be optimistic. Sergey Shevtsov, vice-president of the Central Bank, does not anticipate any serious threats to the domestic economy, though he admits that the crisis might lead to a shortage of liquidity.

“We expect it to peak in mid-December and, thereafter, the budget will be disbursing actively,” he said on the fringes of an international financial conference sponsored by Sberbank.

“The liquidity deficit will grow but it will not, on the whole, create problems for the banking sector and the economy in general.”

The European debt crisis threatens demand for oil – but increases its value as a commodity. The two factors could result in price stability.

The oil market is confusing. While the European debt crisis threatens to slow the global economy and cut demand, it is also turning commodities into protective assets, prompting capital flight into oil. While there are conflicting predictions as to which way prices will move, many experts think the trends will balance each other out.

Dmitry Dorofeyev, senior analyst with the Ursa Capital investment company, says: “Brent prices are down because Europe is virtually in recession and China has launched its ‘soft landing’ policy, reducing the demand for North Sea oil. At the same time, the light brand has been rising fast because statistics show the US economy is on the rise. I think by the end of the year, the two brands will even out and be traded at $100-$105 a barrel.”

Evgeny Tarubarov, chief asset manager of Aton Management, sees a different path leading to a similar outcome: “There is a kind of play between brands on the oil market,” he says. “Brent will cease to exist from next year and a new pricing methodology for will be offered. I think positions in the product will gradually shrink, but alarming signals coming from the Middle East will preclude sharp price changes.

“Before the end of the year and in the first quarter of next year, oil prices will remain at current levels. The spread between Brent and West Texas Intermediate (WTI) will narrow, and prices will virtually even out at about $100 per barrel.”