Which path will Russia take after the 2012 election? 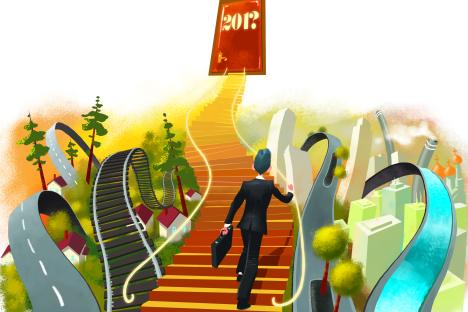 Political scientists and experts from 14 countries gathered at the recent meeting of the Valdai International Club in Kaluga to predict Russia’s future path after the 2012 presidential elections.

Following the 2012 elections, there are any number of routes that Russia’s future development might take in the next five to eight years. Working out what these might be and coming up with an optimal model for development was the task of the Valdai International Club at its recent annual meeting in Kaluga. Political scientists and experts from 14 countries gathered to predict Russia’s future path.

First, five scenarios were discussed ranging from a future hard-line authoritarian regime to a democratic revolution, accompanied by a total change of the ruling elite. In between these extremes were intermediate variants reflecting the directions the country might take under certain conditions. These included: liberal-democratic reforms; authoritarian modernisation; and an inertia model, based on preservation of the status quo and a form of stagnation.

None of the proposed models, the participants concluded, was realistic. The authoritarian modernisation path, though slightly closer to reality than the other scenarios, still failed to take into account many of the factors characteristic of Russia today. Instead, a sixth scenario emerged that takes account of the most obvious trends reflecting the general direction of society. It is basically about gradual accumulation of forces for future change, which will take place simultaneously with a restructuring of society. Sergei Karaganov, head of the Foreign and Defence Policy Council, who chairs the Valdai Club meetings, described that path as an “incremental development” model.

Some of the more fiercely anti-establishment participants in the forum tried to convince their colleagues that a revolution was inevitable. But this possibility was dismissed by the Russian participants and virtually all the foreign members. That is not to say that attempts to rock the boat will not be made by either the right or the left of the Russian political spectrum.

Why do most of the political analysts gathered in Kaluga see the “incremental” model as the most realistic? Because this path guarantees Russia domestic stability and predictable external relations. All the other scenarios proposed for discussion were hypothetical: they might materialise only in the event of unforeseen global events on a scale that could change the course of world history.

The West’s hopes of rapid modernisation after the elections are unlikely to be met, according to experts. They believe Russia will enter a period of stagnation with a positive trend – whereby the country, historically based on a besieged-fortress mentality, will have no need for mobilisation, either peaceful or military. The outside world, given the anticipated chaos in international relations, would not pose any obvious threats. The experts believe that this situation will give Moscow breathing space.

The second most probable scenario – “authoritarian modernisation” – far from running counter to the “incremental” scenario, actually corresponds to it in many ways and may become its driving force. Both models envisage rapid economic development with high levels of political stagnation.

In the “incremental” model, the political elite seeks to maintain the current rate of development and tries to defuse popular discontent through social programmes. Meanwhile, “authoritarian modernisation” implies selective economic and political reforms, carefully controlled by the ruling elite.

Will the outside world permit Russia to implement the “incremental” scenario? On the one hand, in the coming years the West will be preoccupied with its systemic crisis and may simply have no time for Russia. On the other, Europe may become impatient with what it considers to be a slow evolution, with inevitable elements of stagnation. If so, will it try to isolate Russia? In this model of development, Russia may not fit into Europe’s idealistic perceptions.

Whatever domestic policy strategy the Russian leadership chooses after the presidential elections, the foreign policy rapprochement with Asia will continue. There is no question of a pointed freezing of relations with the EU, but diversification of international links will be a Russian priority for the next five years. As one participant in the discussion said: “Orientation on Asia is not a choice of civilisation but a necessity that will enable Russia to maintain a worthy place in world politics.”

In 2012, Russia will, for the first time, host an Apec (Asia-Pacific Economic Co-operation) summit in Vladivostok. As its temporary president, Moscow has suggested that the region’s countries discuss, along with food security and innovation, a programme for the development of transport and logistics to link Asia to Europe and the US. Russia is interested in becoming a key transit country, tapping the potential of Siberia and the Far East. The Valdai Club’s forthcoming report on the challenges facing Russia and Asia suggests the agencies in Moscow be transferred to Irkutsk, east of the Urals, creating a new economic capital there.

Moscow is prepared for closer links with Europe, but does not see a reciprocal attitude from Europe, which is fencing itself off from Russia through visas and prohibitive barriers to Russian business. The dialogue between Moscow and the EU shows signs of weariness, with both sides unwilling to admit they need a pause in mutual relations.

How long that pause will last – six months, a year, several years – depends on when Europe stops seeing Russia as a junior partner and demonstrates the willingness and ability to launch co-operation programmes. So far, Russia-EU summits have had the same, constantly shrinking agenda. In contrast, Asia is looking for closer links with Russia and is ready to treat it as an equal partner, hoping for economic benefits.

Paraphrasing Archimedes’ dictum, “Give me a place to stand on and I will move the Earth,” one could say that sociologists see the middle classes as a force capable of moving Russia in the next five to seven years. According to a focus group study presented to the Valdai Club by Mikhail Dmitriyev, head of the Strategic Development Centre, by 2018 the middle class will account for 60 percent of adults in cities and 45 percent  in the country as a whole. The trend towards rising incomes and the potential demographic situation were factored in. According to these calculations, by 2018, the left-wing electorate will be in the minority, greatly reducing the risk of left-wing populists winning power.

Sociologists claim that, according to their surveys, the middle class today is interested in politics but is not yet an independent political force. It expects the state to deliver clear and immutable rules for doing business, but does not want government interference in the affairs of the business community.

The path Russia takes will depend on whether the future middle class rallies under the banners of a party, and, very importantly, what its cultural level and ethnic composition will be.

But the head of the Russkiy Mir fund, Vyacheslav Nikonov, says developing even the most plausible scenarios for Russia’s development makes no sense, and traps the participants in an “old-fashioned intellectual model”. The discussion needs to focus on concrete projects that determine the future of the state: the budget, prospects for re-industrialisation and innovation. These are the key parameters that will determine how Russia develops, who its partners will be, and what configuration of the political system will emerge.

Yevgeny Shestakov is editor of the international desk at Rossiyskaya Gazeta.