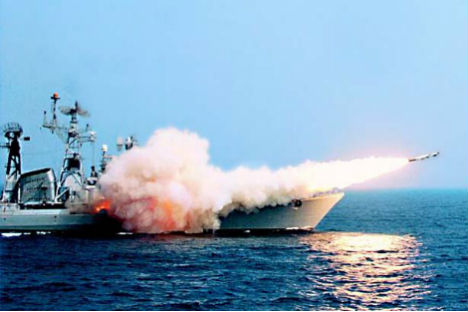 The purpose of the test conducted aboard the Indian frigate Teg was to check how its missile systems operate. A missile fired from the ship’s bow flew along the preset trajectory and reached the destination in the target area. Telemetric data indicated that all of its systems worked properly.

The missile was launched from the first of the three frigates being built by the Kaliningrad-based shipyard Yantar for the Indian Navy.

BrahMos Aerospace Chief Executive Officer and Managing Director Sivathanu Pillai said earlier that the company was ready for the testing, but was waiting for the frigate to undergo sea and dockside trials.

The contract of almost 1.6 billion U.S. dollars for building three frigates for the Indian Navy was signed on July 14, 2007 in New Delhi and became the second one for the supply of Russian frigates to India.

Under the first one of about one billion U.S. dollars and signed in November 1997, three frigates were built and transferred to India.

The new frigates will not differ from the previous ones except that they will be armed with the supersonic cruise missile BrahMos with a range of up to 300 kilometres.

When visiting the headquarters of the Russian-Indian joint venture BrahMos Aerospace Limited that makes supersonic cruise missiles, chief of the Russian Army General Staff, General of the Army Nikolai Makarov said in December 2010 that the joint venture made “reliable missiles that have few matches in the world”.

“A state with such weapons has a serious combat capability,” he said.

The joint venture has designed a new version of the supersonic cruise missile of the same name that can be launched from submarines.

“The missile is ready for use from submarines,” Alexander Maksichev, managing co-director of the joint venture, told Itar-Tass earlier.

The missiles are intended for use aboard the Scorpion-type submarine, for which the Indian Navy has placed orders in France.

The Russian-Indian joint venture BrahMos has designed a new version of the supersonic cruise missile of the same name that can be launched from submarines.

“We have proposed that these submarines be armed with BrahMos missiles too,” Maksichev said.

Brahmos missiles will be tested aboard a Russian frigate being built for the Indian Navy in the Baltic Sea in early 2011, Maksichev said.

“Three Project 11356 frigates are being built for the Indian Navy at Russia's Yantar Baltic Shipbuilding Plant. The first one will begin performance and dockside tests soon,” he said.

“During performance tests in the Baltic Sea the pop-up tests of BrahMos supersonic cruise missile will be carried out,” he added.

“The equipping of the ships with the BrahMos systems and their controls is a fundamental distinction of India's second series frigates from the first three Project 11356 frigates adopted by the Indian Navy,” Yantar Director General Igor Orlov said.

“Under the contract, the first frigate is scheduled to be presented to the customer in 2011, the second and the third ones in 2012,” he said.

He expressed hope that the BrahMos systems would be used to equip the Russian Navy, too. “We expect BrahMos production to exceed 2,000 in the next 20 years,” he said. Russia and India have decided to create a working group in charge of the development and production of BrahMos-2 missiles.

BrahMos cruise missiles have been adopted by India's Army and the Navy' s surface ships. The Indian Air Force has also ordered a batch of land-based missiles. Work is also underway to adapt the missile to Su-30MKI planes used by the Indian Air Force.

The Russian participant in the joint venture is the Machine Building Research and Production Association in Reutov.