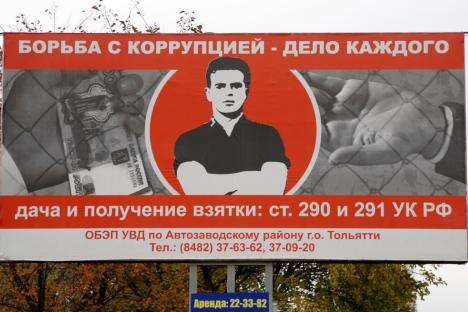 A street poster saying "The fight against corruption is everyone's business". Source: ITAR-TASS

Reported cases of economic crime have declined in Russia over the last two years against the background of recovery from the 2009 financial crisis, according to a PricewaterhouseCoopers biannual survey released Tuesday.

Of the 126 respondents, 37 percent said they had been a victim of economic crime in Russia over the last 12 months. That was 3 percent higher than the global average of 34 percent, but a big decrease from 2009, when the figure for Russia was 71 percent. John Wilkinson, a partner at PwC, said the decline in the number of economic crimes was not necessarily linked to a drop in the willingness of organizations to report incidents, but a reflection of an absolute reduction.

"In 2009, in the depths of the economic crisis, there were additional motives for management to misrepresent figures and for individuals to want to [illegitimately] obtain bonuses or other benefits because of a shortfall in the cash that they had," he said.

Irina Novikova, PwC director for accounting investigations, fraud risks and controls, said the drop could be the consequence of a reduction in the rate of detection. She also linked this to the fallout from the 2009 crisis when many companies reacted by firing back-room staff, including control officers and accounting staff — making fraud and other transgressions more likely to go undetected.

Problems were much more common in larger organizations. Fifty-eight percent of companies that employ more than 5,000 people reported fraud, compared with 20 percent in organizations with less than 1,000 workers.

As in surveys from previous years, bribery and corruption accounted for a much higher percentage of economic crime observed by respondents in Russia (40 percent) than for the rest of the world (24 percent). But the Russian figure showed an 8 percent drop from 2009, when corruption accounted for 48 percent. This decline contradicts other international measures of corruption in Russia that show an increase. Transparency International placed Russia 146th in its 2009 corruption perception index; in 2010 the country ranked 154th.

Wilkinson told The Moscow Times that an increase in the number of respondents to the anonymous PwC survey showed a growing willingness to discuss the issue and was an indicator of greater transparency. For the first survey in 2003, not a single participant admitted to an incidence of economic crime, meaning that the survey was obligated to report a zero percent rate for Russia. Those invited to take part in the survey included about 3,000 executives from the country's top 1,000 companies, including multinational ventures. 126 individuals replied, up from 87 in 2009.

Respondents to the 2011 survey were not optimistic about the future — 73 percent said their organization will continue to be highly vulnerable to economic crime.