Lights from the underground 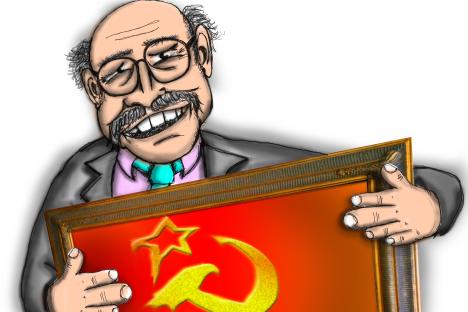 Norton Dodge, an American professor, created the largest collection of Russian Noncomformist art. He passed away in November at the age of 84.

For five decades, Norton Dodge collected Russia’s unofficial artists, creating the largest collection of Russian Noncomformist art. At the height of the Cold War, beginning in 1955, Dodge visited the Soviet Union frequently as an economist studying women in the labor force. But his focus shifted, and he spent much of his time with artists, often at apartment exhibitions.

He also started buying art and smuggling the works out. He found he was quite good at it, rolling them up inside posters and rugs. Dodge died on Nov. 5 at the age of 84. Many of the more than 20,000 works by 1,000 artists Dodge purchased and smuggled out are accessible to the public, because he and his wife, Nancy Dodge, donated the entire collection to Rutgers University. The art from 1956-1986 - from the time of Khruschchev’s Thaw to Gorbachev’s Glasnost - are cataloged as part of the Zimmerli Art Museum at Rutgers. The university now has a program to study unofficial art of the Soviet Union because of this treasure. Some of it was easy to get out of the U.S.S.R. At times, the Ministry of Culture was only too happy to stamp the art, now worth six to seven figures, as “worthless.”

The Norton I Knew

It was dumb luck that he lived just south of Washington, about an hour’s drive from where I lived, depending on traffic. In 2001, I began to write him letters. No response. I became annoyed, and he got more letters. No response. By 2004, I realized that he didn’t open his own mail. I then called and got the most peculiar answering machine recording of his voice: “You’ve reached Norton and Nancy Dodge, please leave a message. If you’re asking for money or selling something, please use the mail.” Beeeeep. I immediately knew that we were meant to be friends.

“Professor Dodge, my name is …” No response. No call back.

Having a mom who worked in the press helped. A colleague at Voice of America assigned a TV crew to film a segment about Norton at his home, Cremona Farm. I volunteered to be an unnecessary, unpaid “production assistant” for the day. We arrived in a van, and armed with a tripod, I popped out, and spoke in rapid-fire succession…

“Professor Dodge, my name is Mark Kelner and I’ve been writing you these letters and leaving you these messages and I work in a gallery and I’m doing this museum show in D.C. and the work is right up your alley and would you come?”

“I’d be happy to,” he replied, in a typical gesture of generosity and earnestness, unusually uncommon for busy people, to say nothing of living legends. I had read his books. Been to see his namesake collection at the Zimmerli Art Museum on many occasions. So, yes, I modestly stalked him, but with the best of intentions. The result was the genesis of a deep friendship, despite a 47-year age difference, that lasted until the final days of his life.

If he had a doctor’s appointment downtown, we’d meet up for lunch following it. If I had an opening, he’d be there, dressed in his signature colorful tie. I’d visit the farm often and do research in the library. That he happened to be famous quickly became an afterthought. I started collecting baseball cards at seven. As a kid, he collected rocks and bottle caps. We met concerning fine art, but our relationship was much more about asking questions and answering them with more questions. And we could keep it up for hours.

If Norton would call, I’d know to budget at least an hour to answer as he could easily go off on tangents, all the while forgetting why he called in the first place. If he left a voicemail, it was usually four minutes long and he’d be cut off mid-sentence by default. My questions soon became more personal. He was deeply emotional when talking about art and meeting artists, savvy in his praise, always learning. He taught me forever to be a student. He was generous beyond bounds in support of all artists, under the most impossible of circumstances. Above all, Norton was as much of an artist as those he collected.

Collecting was his creative act.

While others would see the enormity of his collection, he would concern himself with the gaps - in geography, dates and media. It was never-ending, and for me, it became infectious. In him, I found a mentor and a best friend. It was the most natural thing to discover paintings in or out of his collection and get his take on them, which usually would blow my mind. Often times, I’d keep him posted as to who’s doing what these days, or update him on current events in the world of Russian art.

Most exciting to me was the crossover effect of artists he collected from the 1960s to the 1980s, artists who are now considered staples of international contemporary art - Erik Bulatov and Oleg Vassiliev, among other names. Most exciting to him were the recent acquisitions of some obscure Georgian, Armenian, Azerbaijani artists no one’s ever heard of but are now a part of the broader and ever-expanding Dodge Collection.

A few days before he passed, I had called with good news.

“Norton, you won’t believe what happened! I’ve been asked to give a talk about Russian art at St. Mary’s College. I met a guy at some art party. He had a beagle. I liked his beagle. So we got to talking. He teaches a class. Knew about you and the collection. Said he got interested in art after seeing some of your pieces there. He was deeply moved I knew what he was talking about.”

Norton got the point way before I ever made one, having been a Trustee there since 1968 and lecturing for years until 1988, his endowments still support academic excellence in both students and faculty.

“You need to grow out a walrus-style mustache, as I had one, so as to continue the tradition,” he said.

Norton embraced humor with grace. He abhorred sports. Was the ultimate backseat driver. And was the easiest person to love - fully, unconditionally and, like him, wearing one’s heart on one’s sleeve.

Mark Kelner is a Washington, D.C.-based art dealer and collector of Russian art.