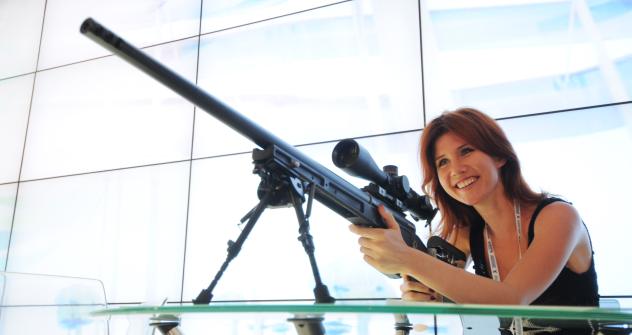 Besides the notorious Kalashnikov, Russia’s gun market is flooded with firearm imports from Austria, Britain, Finland and Germany.

An avid shooter, Alexei Sorokin skipped this year’s ultimate competition for rifle fans in North Lawrence, Ohio. His two custom-made firearms, crafted by an American gunsmith and stored by his American coach, didn’t get a chance to fire at the Super Shoot in May. Keeping him in Russia, however, was the same powerful passion — Sorokin was putting the finishing touches on the country’s only private factory that designs and produces its own brand of hunting, sporting and sniper rifles.

41-year-old Alexei Sorokin first took up professional shooting in 1983. He was known for sweeping the prize categories at various shooting competitions during his stint in the armed forces. He gave up sport shooting in 1992, but remained influential enough to still hold the title of president of the Russian National Federation of Precision Shooting. Sorokin quit his job as an executive at an engineering company and began looking for investors. He succeeded in finding funders and soon founded the first private gun manufacturer in 2009, and this summer was putting the finishing touches on the country’s only private factory that designs and produces its own brand of rifles. The idea, Sorokin said, was to compete with imports from Austria, Britain, Finland and Germany by offering “higher quality at a reasonable price.”

Sales of Orsis firearms began in August. “We haven’t had breakthroughs like this since the Kalashnikov assault rifle,” said Igor Korotchenko, director of the Center for Analysis of World Arms Trade, enthusiastic about the new weapon’s prospects.

Busy deluging the world with Kalashnikovs, the country left its own market bare to an onslaught of Western brands that sought to please more sophisticated customers looking for hunting, sporting or counter-terrorist firearms.
The idea, Sorokin said, was to compete with imports from Austria, Britain, Finland and Germany by offering “higher quality at a reasonable price.” He quit his job as an executive at an engineering company and began looking for investors.

“By virtue of my contacts in the firearms community, I came to know a person who cared about this subject,” Sorokin said in an interview. “He brought together a group of investors.”

Sorokin called the person during the interview, to ask permission to disclose his identity — and the answer was no. One of the investors — Mikhail Abyzov, chairman of the Ru-Com holding company — came to light when the company showed off the rifles at the Sochi Investment Forum in September.

On a tour of the exhibition, Prime Minister Vladimir Putin fiddled with one of the rifles for a while as he listened to Abyzov’s commentary. Defense Minister Anatoly Serdyukov has come to see the factory in Moscow. More exciting to the general public was the presence of former spy Anna Chapman as she handled and caressed the rifles at the forum.

With the capacity to produce 6,000 rifles a year, the enterprise is not a titan of the industry where — according to Aaron Karp, a consultant of the Swiss-based Small Arms Survey — annual output of 50,000 is common. But it’s a refreshing attempt by entrepreneurs to fill a niche that has always been firmly and indisputably in state hands.

The investors coughed up $30 million to arrange for a building in eastern Moscow, buy Western equipment, design the rifles and train the staff, Sorokin said. He hired recent graduates from the Special Engineering Department at Moscow’s Nikolai Bauman State Technical University to work as designers.

Working over the drawing table, the designers kept in mind Sorokin’s admiration of the bolt system created by U.S.-based Remington Arms Company and his annoyance with the large amount of small parts — “as many as inside an alarm clock” — in firearms from Austria’s Steyr Mannlicher, he said.

“These rifles are created from my notion of what a firearm must be,” Sorokin said. “Reliability is in simplicity.

“To make a high-precision design that is simple is a good goal for a gunsmith, and it’s exciting in and of itself.”

The established Russian manufacturers have been too hesitant to move beyond Soviet technology, said Vadim Kozyulin, director of the conventional weapons program at PIR Center, a think tank.

Sorokin declines to name specific companies he sees as his competitors in the hunting and sports shooting markets, saying only that they operate in the same and more expensive price segment. That would mean such manufacturers as Steyr Mannlicher, Finland’s Sako, U.S.-based Remington and Germany’s Blaser Jagdwaffen.

One of the least expensive of Germany’s Blaser rifles, the R93, sells for 107,800 rubles ($3,560) at Kolchuga, an authorized Moscow dealer of many Western brands.

Several Russian state-owned companies also make rifles for civilian use — such as Saiga, a lookalike of the Kalashnikov assault rifle, from the Kalashnikov manufacturer Izhmash — but they target the lower-end market. Irina Suslova, director of the Artemida gun store in Moscow, said here, too, Russia was quickly losing out to rifles made in Turkey.

“This comes at a very good time,” she said about the new Russian rifle maker. “If we don’t start doing something now, we will lose the whole market to foreign manufacturers.”

The civilian market, at best, consumes 60,000 rifles annually, with sales worth from $80 million to $100 million, Sorokin said.

In the defense and security realm, the Orsis T-5000 model can replace weapons that are now in use by special forces, Sorokin said. The company is in contact with the Defense Ministry about potential contracts, he said.

"These rifles are created from my notion of what a firearm must be. Our design is laconic. Reliability is in simplicity. To make a high-precision design that is simple is a good goal for a gunsmith, and it’s exciting in and of itself."

A Defense Ministry spokesman said he couldn’t comment when reached by phone. Nikolai Makarov, chief of the armed forces General Staff, said in September that the army would train more snipers and look to substitute the Dragunov rifle with a more up-to-date precision firearm.

At 160,000 rubles ($5,135)a piece, the Orsis option is quite expensive, but still has a chance, Kozyulin said. Military expert Anatoly Tsyganok said test-firing showed Orsis to be in the same league as its foreign-made rivals.

The company posted a conspicuous note on its web site in February that the current backlog could cause customers to wait as long as eight months to one year for their orders.

Small enterprises like Promtekhnologii appear around the world at times, although the global gun market mostly remains the domain of old favorites, said Karp of the Small Arms Survey.

Wearing a safety jacket during the interview, Sorokin looked as if he had been momentarily plucked from the middle of the bustle of the day’s business at the factory near the Ploshchad Ilicha metro station. “The old industry had lost its way,” he said. “This created a window of opportunity.”