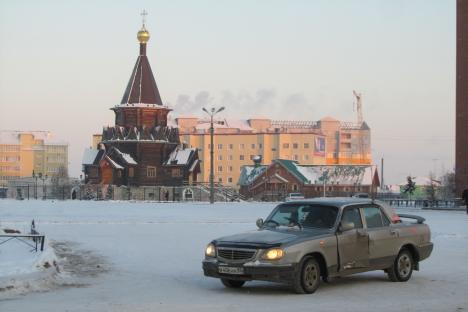 The names of some Russia's cities sound weird and unfamiliar even for some native Russians. RBTH blogger Evy Hua describes her trip to Naryan-Mar, a unique Russian city which embodies traditional stereotypes and reflects new aspects of the Russian lifestyle.

Never heard of Naryan-Mar? Don’t worry, neither have most Russians. It is a city with a population of about 21,000, in the Nenets Autonomous Region north of the Arctic circle in the European part of Russia. It is best reached by plane in order to avoid the rather primitive or icy roads leading there by land.

“Why the hell did you go there?” This question was quite frequent once I revealed our plans for the November holiday to friends and colleagues. True, not many people fancy ice-cold and remote places in Russia for a leisure holiday, but as it was only a two-hour flight from Moscow, the destination seemed worth a try. It turned out that only two airlines fly there: Nordavia and Utair, and there was no possibility of buying e-tickets, since apparently the airport in Naryan-Mar does not support this service. Another quite surprising fact turned up at check-in: “No girls in exit rows.”  To clarify, my boyfriend enjoys the spacious freedom of exit rows, however his dream of stretching out his feet on this flight was killed by a very serious check-in lady, explaining that she would not be able to book us together into an exit row – company policy. My physical inability as a girl would not allow me to assist in case of an emergency. “In most Western country this policy would not even be legal,” my boyfriend said, trying the “In-Western-Countries Approach” and was simply cut off by an unfriendly: “We are not in the West!”

Our arrival in Naryan-Mar was greeted with a temperature of -17 degrees Celcius, an icy landing strip, one other plane (from Nordavia) and a masterpiece of Soviet airport building with the letters Naryan-Mar. There were only a few travelers, most of them locals on their way home. In our reserved taxi (featuring funny furry seat covers, which a bunch of Muppets must have died to produce) we experienced our first impressions: simple roads; a small town square; great low winter sun (setting at around 4 p.m.); a mix of Soviet buildings and traditional Russian wooden houses; a traditional Russian church; an impressive corporate building belonging to Lukoil (a major employer in the city) and a strange smoky smell, possibly from some meat factory nearby. Apparently reindeer meat is processed close by and made into delicious sausages and other specialties. These can be sampled in the old-fashioned grocery stores (featuring with a typical Russian lady leading her store like an army general) or in one of the few restaurants in town. Delicious though the variety of prepared reindeer sounds, after only a day of boiled, gulashed, grilled, sausaged, souped and dried Reindeer (jerky) you really start missing good old cow-based food items.

Don’t think this is a cheapskate’s paradise holiday. In contrast to most Russian regional cities, which are quite cheap, Naryan-Mar has a price level comparable to that of Moscow. Locals residents receive subsidies to compensate to some extent the prices, which are a result of the cost needed to trasport products to such a remote location. A semi-luxury room per night in a container-house-style 5-star hotel cost about $200 per night, including a very basic breakfast. Do not expect a day spa and fitness room here, the indication of 5 stars was probably only an attempt to charge the $200 per night. But don’t get me wrong, this hotel is lovely, however, given the surprise of the receptionist to see a foreign passport and her disbelief that our purpose in visiting Naryan-Mar was “tourism,” I think it’s safe to assume that the tourist industry in Naryan-Mar hasn’t quite picked up yet.

But that’s what makes it so attractive. Where else could you be served a generous portion of vodka in a teapot, from a restaurant that lacks a liquor license, for free in order to warm yourself against the cold. Or what about a visit to a chum (a local yurt/tent) in the tundra?  Valya, the owner of the chum, owns a not-quite-red-nosed, but one-eyed pet reindeer. Wounded by a local poacher, the reindeer makes its living by being Valya’s main attraction and giving occasional appearances at town festivals as a main attraction for the children. Valya hosts guests, such as a group of locals celebrating a birthday party in the chum, in order to tell them about the traditional local way of life (in chums) and what to see around the area. He offers a filling reindeer meat soup along with a chat as you cuddle on the reindeer furs laid out in the chum. He sells those for something like 2000 rubles (around $60) per piece and offers this important fact: Making love on a dark reindeer fur will guarantee you a male descendant, a light fur will make a girl.