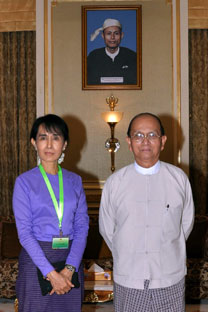 The world is asking whether Myanmar, after six decades of military dictatorship, has embarked on a genuine political transition that could end the country’s pariah status.

Historic transformations often happen when least expected. Mikhail Gorbachev’s liberalizing policies of glasnost and perestroika in the Soviet Union emerged at one of the Cold War’s darkest hours, with U.S. President Ronald Reagan pushing for strategic missile defense and the two sides fighting proxy wars in Afghanistan and elsewhere. Deng Xiaoping’s economic opening followed China’s bloody — and failed — invasion of Vietnam in 1978. And South Africa’s last apartheid leader, F.W. de Klerk, was initially perceived as just another apologist for the system — hardly the man to free Nelson Mandela and oversee the end of white minority rule.

Now the world is suddenly asking whether Myanmar, after six decades of military dictatorship, has embarked on a genuine political transition that could end the country’s pariah status. Is Myanmar, like South Africa under de Klerk, truly poised to emerge from a half-century of self-imposed isolation? And can Aung San Suu Kyi, the heroic opposition leader, and Thein Sein, Myanmar’s new president, engineer a political transition as skillfully and peacefully as Mandela and de Klerk did for South Africa in the early 1990s?

Despite her two decades of house arrest and isolation, Suu Kyi possesses two of the gifts that enabled Mandela to carry out his great task: a reassuring serenity and an utter lack of vindictiveness. As Myanmar’s authorities test reform, these gifts, together with her negotiating skills and, most of all, her vast moral authority, will be tested as never before.

Thein Sein has offered strong signals that his is a very different administration: He has freed political prisoners and invited Suu Kyi for direct talks with him. Indeed, Suu Kyi now enjoys far greater freedom of movement than she has at any time since she received the Nobel Peace Prize 20 years ago.

For both Suu Kyi and Thein Sein, every step from now on will be delicate, to be calibrated with the same care and deliberation that Mandela and de Klerk used in bridging their differences and leading their country out of isolation. But the international community, too, must act with great care.

The Japan Investment Bank’s decision to invest in port development in Myanmar is one positive sign that the world will keep pace with Thein Sein step for step. And U.S. President Barack Obama’s decision to send Secretary of State Hillary Clinton to Myanmar to meet Thein Sein is another clear sign that the world is ready to end the country’s isolation.

No one should rush to judgment yet, but Thein Sein’s decisions, at least so far, are beginning to resemble those of de Klerk when he initiated South Africa’s reform process. Fortunately, Myanmar already has in Aung San Suu Kyi its very own Mandela.