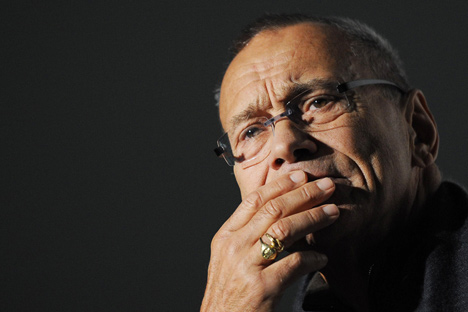 Russian high-profile film-maker Andrei Konchalovsky spoke to Russia Beyond the Headlines' Yolanda DelgadoThey about his transformation as an artist, the state of the modern film industry and his latest movie, “The Nutcracker,” which will be released in December.

He could have been a pianist, but his passion for film won out over his pulse for music. Andrei Konchalovsky, the older brother of Russian director Nikita Mikhalkov, goes by his mother’s maiden name. His beginnings as a screenwriter are tied to Andrei Tarkovsky’s cinematography. During the 1980s, when his films were already known across Europe, he packed his bags and went to Hollywood. There he gained some success with “The Train from Hell,” based on an original script by Akira Kurosawa and “Tango and Cash,” starring Sylvester Stallone and Kurt Russell. He returned after suffering disappointment with the great American machine and its way of understanding cinema.

Russia Beyond the Headlines' Yolanda Delgado caught up with Konchalovsky in Segovia, where the 6th annual Festival of European Cinema was paying tribute to his work in the film industry. They discussed his latest film, “The Nutcracker,” which will be released in December; his transformation as an artist; and the state of the film industry today.

Russia Beyond the Headlines: You have dedicated 50 years to film. What is left of the director who began with Tarkovsky in today’s Konchalovsky?

Andrei Konchalovsky: I’ve changed everything. We are two different people. At that time, Tarkovsky and I were very young. We thought that art could change the world; now I don’t believe that. At that time, both of us thought we were geniuses; today I know I’m not.

RBTH: What made you change your mind?

A.K.: The prospect of death changes you. What once seemed so important, now means so much less. The idea of death makes everything else relative.

RBTH: What was Tarkovsky like, from what you can tell us about him?

A.K. Tarkovsky was deep. We had a lot of fun. Well, he had less fun. I always liked to laugh, even though I have no sense of humor. Tarkovsky didn’t have one in the literal sense. He was a man who suffered a lot. There is a Russian saying that goes: “Those who suffer live their life like a drama; those who think live their life like a comedy.” I would rather belong to the latter group.

RBTH: Today you showed us a new film, “The Nutcracker.” Animated, in 3D, and for the family audience. You always surprise us with a new genre. Did you want to make it difficult for those who study your films?

A.K.: I like to try new things.  Everything I do, I consider to be art; yet I think I am very different from Tarkovsky or [Akira] Kurosawa, people who always make films in a certain genre. I prefer to be like Shakespeare. To feel free. To make dramas, but also adventures, or action movies, too.

RBTH: You commented that you abandoned making movies in Hollywood, where people eat popcorn. But “The Nutcracker” is a children’s film and, inevitably, there will be popcorn.

A.K.: “The Nutcracker” isn’t a film strictly for kids; it’s for the entire family. I don’t think popcorn can help capture what I wanted to convey. I am concerned about the trivialization of the truth that exists in our world. “The Nutcracker” can be interpreted in many ways, including as a representation of totalitarianism with the appearance of real democracy. I call this “ratification.” When the public sees the film, they will know why.

RBTH: Shortly after “The House of Fools,” you decided to go to Hollywood. It was the 1980s. It coincided with [Martin] Scorsese, [Francis Ford] Coppola, and [Stanley] Kubrick. What can you tell us about the Hollywood that you currently dislike?

A.K.: It’s that none of the directors you cited worked for Hollywood. They weren’t fast-food directors; they didn’t work for McDonalds or Coca-Cola. They made real films. James Cameron, for example, he is in the category of directors that have the scent of popcorn.

RBTH: And why do you think directors like David Mamet, David Lynch, Woody Allen or Jim Jarmusch aren’t successful in your country?

A.K.: They do cinema, European films, films outside the Hollywood chain. Things in film have changed so much. Before, people didn’t worry about the costs. Now it is the first thing that they ask about. So if your film costs millions of dollars, it is supposed to be a good one and be a blockbuster. This way of thinking is erroneous.

RBTH: I read somewhere that Woody Allen once remarked that his Uncle Vanya was the best Uncle Vanya that he had ever seen. Why hasn’t he made more literary adaptations?

A.K.: I also remember that comment. If Woody Allen saw the representation of Uncle Vanya that we are making for theater, which is even more eccentric than his film, I am convinced he would like it even more.

RBTH: You have done almost everything in film, in theater, and even in opera – director, writer, producer. What role do you feel most comfortable in?

A.K.: In the role of the professor.